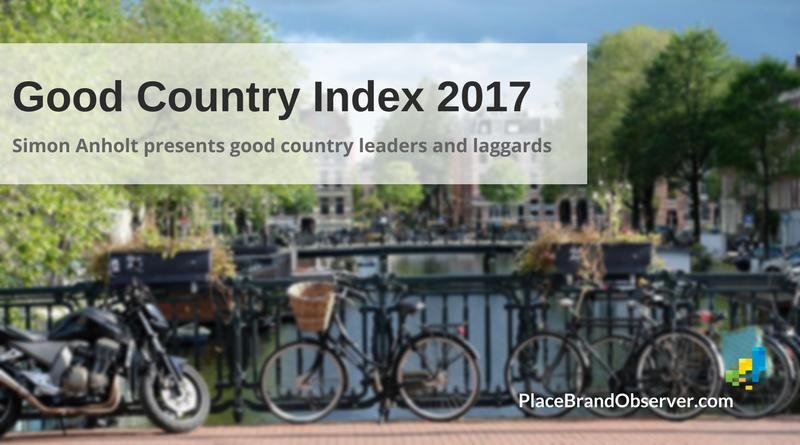 How good is your country to the rest of the world? The just released latest version of the Good Country Index will give you some indication. Developed by Simon Anholt with the support of Robert Govers as research partner, this annual benchmark study sheds light on which countries care about and contribute the most to the well-being of humanity – outside their own borders – and which are lagging. We invited Simon Anholt to share his key takeaways from the 2017 Good Country study.

Simon, which findings of the 2017 Good Country study did you find the most intriguing?

The fact that it shows the USA continuing to slide in the rankings, even though the data was collected long before Donald Trump took office (this didn’t stop Breitbart News branding the Good Country Index as ‘fake news’, presumably because they took it to be an attack on his presidency).

The UN agencies and other bodies whose data we use to calculate the Good Country Index rankings always take a few years to publish their findings, so the latest Index actually records behaviours that took place in 2014.

So it seems as if America’s disengagement from international responsibility is actually a longer and more complex story than Trump and “America First”.

Which countries have seen the strongest increase in “good country” performance?

Nicaragua has risen by 67 places in the overall ranking since the previous edition, and Albania by 40.

However, there is a tendency for smaller countries to be more volatile; for example, just a handful of additional UN volunteers from a small country might double its contribution on that indicator, which would create a substantial rise in its ranking.

We already divide most of the indicators by GDP in order to create a more level playing field and to avoid penalising poorer countries, so there isn’t an easy way of also flattening out this effect.

Benin has fallen by 60 places since the last edition, and Jamaica by 53: again, these changes are likely to be magnified by the small size of each country’s population, even if the change is still a significant cause for concern.

It’s worth noting that Brazil has fallen by 33 places, and that’s a big country making a significantly smaller contribution to humanity and the planet.

Interestingly, Guyana has fallen by 36 places, Argentina by 28, Paraguay by 27 and Colombia by 2, so there appears to be a generalised Latin American effect here, which needs closer examination.

Looking back over the last years, which trends do you observe, with regard to “good country” performance across your criteria?

With 163 countries constantly moving up and down in the index, and only three editions to compare so far, it’s hard to make deductions about general trends.

But what doesn’t change is the more than 70% correlation which my colleague Robert Govers has identified between the Good Country Index and the Anholt-GfK Roper Nation Brands Index (a large annual opinion poll which measures international perceptions of countries): this strongly suggests that countries which contribute the most to humanity and the planet tend also to be the most admired countries.

The most admired countries, as we know, tend to get more trade, more tourism, and more productive international engagements generally. So the consequences of this correlation are hugely significant: essentially, it implies that “corporate social responsibility” is as relevant for nations as it is for corporations.

How does the Good Country study work?

The idea of the Good Country Index is simple: to measure what each country on earth contributes to the common good of humanity, and what it takes away, relative to its size.

We have used 35 reliable datasets which measure how countries affect the world outside their own borders: there are five of these in each of the seven categories, covering the big issues like education, science, war and peace, trade, culture, health, censorship, the environment, freedom, etc.

Most of these datasets are produced by the United Nations system and other international agencies, and a few by NGOs and other organisations.

These datasets are combined into a common measure which gives an overall ranking, and a ranking in each of the seven categories. The performance indicators are measured per GDP dollar, to correct for the size of each country’s economy, and create a level playing field.

Learn more about the Good Country Index in our interview with Simon Anholt or access latest findings here.