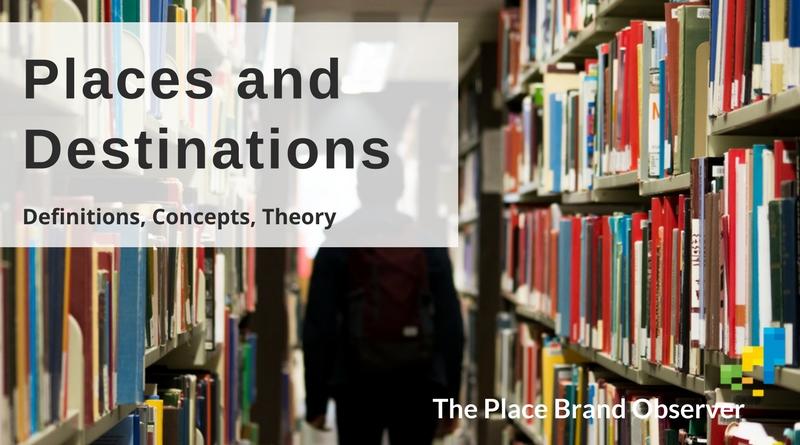 Place branding – the name suggests it – is all about places. But what exactly is a place, or a destination? How come people’s perceptions of places can differ so widely and make them behave differently depending in which place they are?

Places as localities with social meaning

Essentially, place is more than a physical space or “a passive container within which activities occur” (Meethan, 2006, p. 7). Rather, it is “constructed – and continuously reconstructed – through social and political processes that assign meaning […and can trigger powerful] emotional sentiments that influence how people perceive, experience, and value the environment” (Cheng, Kruger, & Daniels, 2003, pp. 87-88).

Whereas landscapes are often the most visible feature of places (Gibson & Davidson, 2004; Relph, 2004, see also Campelo, Aitken, Gnoth, & Thyme, 2009), places should not be reduced to landscapes alone, as a combination of many different aspects contributes to a place’s distinctness, including specific landmarks, historical events, or cultural characteristics (Campelo, Aitken, & Gnoth, 2011, p. 5).

Describing the “real” nature of a place is difficult because “places are, in and of themselves, social constructs that defy ready definition, categorisation, and measurement” (Cheng et al., 2003, p. 90).

According to Corbett (2006, p. 17), the “meanings that individuals associate with a place may have purely instrumental or utilitarian values (what the land ‘is good for’) as well as intangible ones like belonging, beauty, and spirituality.” Themes of belonging and identity are also stressed by Cheng et al. (2003), who notes that places influence people’s view of themselves and what they consider appropriate behavior.

In the place branding context, nations are about politics, whereas places – especially tourist destinations – are about commerce and promotion.

Unlike nations, discourses of places – especially in a place branding context – tend to have a commercial rather than a political focus, often crafted to promote a certain place for tourists or to support a country’s export market.

The material, or commercial, dimension of discursive representations of places is most visible in tourist destinations: geographical regions explicitly branded and positioned for tourist enjoyment and all sorts of travel activities (Ritchie & Crouch, 2003).

As is the case with places in general, destinations never consist of only one statement or action (Saarinen, 2004), but function as the site and subject of various and sometimes competing discourses (Papen, 2005). They are, according to McGibbon (2006, p. 142), “surrounded by entire symbolic complexes of images originating from diverse sources, including art, photography, literature, film, music, television and other forms of advertising.”

Conceived as a discursively constructed representation of a specific geographical place, a destination “influences and organises both the actions of visitors and the conceptions of the local residents themselves” (Govers & Go, 2009, p. 15).

Referring to Anderson (1983), Meethan, Anderson and Miles (2006) have suggested that destinations constitute “imagined communities” for tourists and hosts.

By looking at the narratives of place, the stories, histories and myths that are associated with people and place, and by acknowledging the complexities involved in the ways in which people actively engage with their environment, together with the tensions between expectations and realisation, we can arrive at a more nuanced understanding of the production and consumption of tourist spaces.
(Meethan, 2006, p. 7)

Anderson, B. (1983). Imagined communities: Reflections on the origin and spread of nationalism. London, UK: Verso Editions.

Papen, U. (2005). Exclusive, ethno and eco: Representations of culture and nature in tourism discourses in Namibia. In A. Jaworski & A. Pritchard (Eds.), Discourse, communication and tourism. Clevedon, United Kingdom: Channel View Publications.

Know of a new idea or publication linked to the theory of places and destinations? Help us develop this page further and in exchange benefit from free access to our premium content: get in touch.