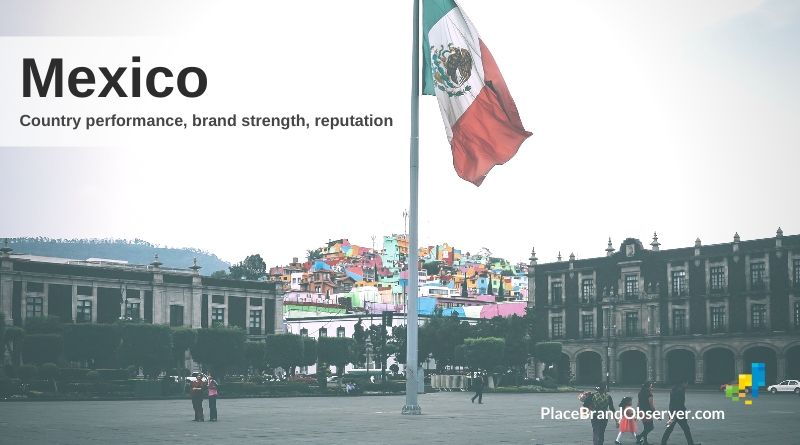 Mexico: boasting a culturally rich spread of cities, sites, traditions and historical legacy, the country performs well in terms of trade and tourism while the Mexican lifestyle shines through, outranking contenders according to indicators of livability. But where does this leave Mexico’s brand strength and talent competitiveness when factoring in perceptions of corruption and the economic value of peace?

How “good” is Mexico?

The CAF World Giving Index (10th Edition) ranks Mexico 73rd overall. Comprised of rankings in helping a stranger (67th), donating money (83rd) and volunteering time (65th), the scores are based on surveys conducted worldwide by a representative sample of individuals living across the country at hand.

Lagging behind: Mexico’s global contribution in terms of Environmental Performance ranks 72nd, behind that of Sri Lanka (70th) and Equatorial Guinea (71st).

Economic value of peace and presence of corruption

The Global Peace Index (GPI) ranks Mexico 140th, behind Cameroon (138th) and Iran (139th) and just ahead of India (141st) and Palestine (142nd). Mexico is among the 86 countries which improved over the last years’ report, contributing to the first uptick in the average level of global peacefulness in the last five years, according to the GPI.

The Economic Value of Peace (2018) ranks Mexico 31st, which is determined by the economic cost of violence by country. Mexico can be grouped among the likes of Botswana (30th) and Burundi (32nd). Similarly, the Global Terrorism Index ranks Mexico 48th, seeing a negative jump of 8 positions since the last report.

Drawing on the results of the Global Competitiveness Index (GCI), Mexico ranks 48th. Displaying slight growth of 0.3 points, Mexico drops two places due to other countries improving at a faster rate.

Additionally, Bloom Consulting ranks Mexico in terms of Trade and Tourism, securing positions 16th and 11th respectively. Both of which reported a jump in position, 3 in terms of trade and 5 in terms in tourism.

Quality of life in Mexico

OECD Better Life Index ranks Mexico positively in terms of life satisfaction and civic engagement, with room to grow in health as well as the remaining variables which fall much farther behind the OECD competition, such as education and work-life balance.

Mexico claims the 58th position of 82 countries according to the World Economic Forum’s Social Mobility Index.

The Happy Planet Index (HPI) ranks Mexico 2nd, boasting an exceptional score in wellbeing (11th) notwithstanding results which demand improvement of economic inequality for reasons such as the top 20% of the population earning more than 13 times as much as the bottom 20% of the population, according the HPI.

Mexico: how attractive for talent and students?

The Expat Insider offers unique insight on Mexico’s performance in terms of attraction, reception and retention of talent, notably those who travel for educational purposes. Key insights include friendly locals who aid in the ease of settling in. Mexico ranks 3rd for personal happiness, and while expat parents fear for their children’s safety, they are satisfied with childcare and education, which has improved 28 places in the global benchmark study, jumping from 41st in 2018 to 13th in 2019.

In terms of higher education attractiveness, the World University Rankings consider 17 Mexican institutions of which three fall within the ranking of 601-800, while the remainder rank 1001 or greater.

Enjoyed our snapshot of global rankings and indices on Mexico’s country performance, its sustainability, talent attractiveness brand strength and reputation? Thanks for sharing!