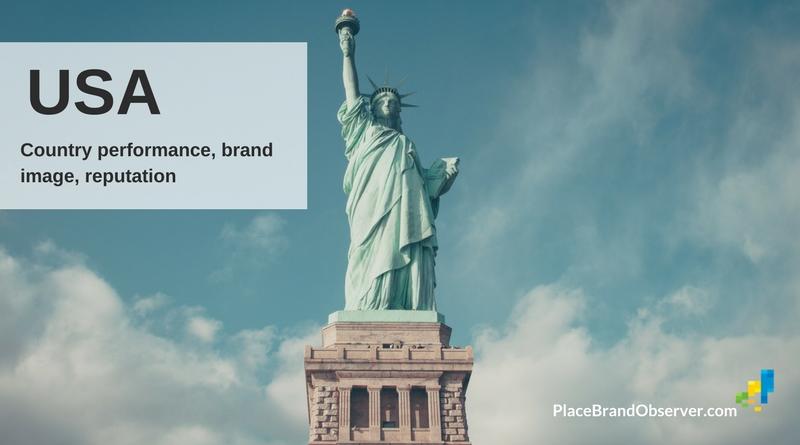 USA: How does one of the world’s most influential countries perform in global rankings that measure talent attraction potential, public diplomacy and soft power strength, environmental sustainability and economic development? What influence have recent political developments had on the international reputation of the US? Answers in this summary of global reports, studies and rankings on country performance, brand image and reputation.

Doing business in the US

What are the difficulties of starting a business in the US?

The US ranks sixth in the 2018 Ease of Doing Business index. This is the best result the country has had in the last three years, although far from the 3rd position achieved back in 2008.

The best aspects of doing business in the US are getting credit (2nd) and resolving insolvency (3rd). Its performance in other dimensions is not as favorable. While enforcing contracts is seen as relatively easy (16th), getting electricity and starting a business both position the US among the average of the ranking (49th), showing that the country has a way to go attract new businesses.

WEF’s Global Competitiveness Index ranks the US as the second strongest country in the world. This is one position up from the 2016-17 edition. The Global Competitiveness Index evaluates twelve pillars, such as innovation (2nd), financial market development (2nd) and labour market efficiency. The USA perform well in almost all of the pillars included in the study, with the exception of macroeconomic environment, where the country ranked 83rd in the 2017-18 report.

How well does the US perform in talent competitiveness?

For the third consecutive year, the US is ranked third-best country for talent attraction and retention in the Global Talent Competitiveness Index. Despite its good results, the study brings out that, since 2007, the United States has been falling behind with regard to infrastructure, macroeconomic environment, and goods market efficiency.

On the other hand, the country has improved on health and primary education, higher education and training, and especially technological readiness – one of the essential pillars for taking advantage of new technologies.

How much soft power does the US have?

The US ranks 3rd in the 2017 Soft Power 30 index, handing its top position in the 2016 index over to France, which made an important leap from 6th position to becoming the most influential country in terms of soft power. While Emmanuel Macron’s electoral victory had a positive effect on his country’s soft power, the contrary occurred with Donald Trump being elected the president of the United States.

Despite the country still being unrivaled in higher education, cultural production and technological innovation, the Soft Power 30 report indicates that President Trump’s preference of hard power over soft power has led to a decline in America’s performance in this aspect.

Meanwhile, the Global Soft Power Index 2020 ranks the US number 1. This difference in ranking can be determine by the methodologies in ranking but overall telling a very similar story. According to Brand Finance, the US ranks most highly in familiarity, followed by influence and reputation respectively. The 2020 presidential election will undoubtedly play its role in positioning the US over years to come.

What is the US’ contribution to global well-being?

The Good Country index positions the US 25th for its contribution to global well-being. This is five positions down from the study’s previous version. The United States’ most positive influence is in health and well-being (10th) and world order (29th).

The country’s contribution to international peace and security (72nd) and culture (67th) are below of what could be expected from one of the global political leaders.

How well do the US perform in environmental and social sustainability?

The US’ position in the Environmental Performance Index has been declining for two consecutive years. In 2018, the US ranks 27th. Despite its efforts of reducing CO2 emissions by 26% by the year 2025, the US is still one of the biggest carbon dioxide contaminators in the world. The study also brings out that, contrary to the tendency of many G-20 countries, the US has been increasing its fossil fuel subsidies since 2009, encouraging the consumption of non-sustainable fuels.

The US ranks strikingly low (115th) for its environmental sustainability in WEF’s 2017 Travel and Tourism index. The country performs lowest in the environmental treaty ratification (132nd) due to its tendency to sign but not ratify international treaties that aim to protect climate and biodiversity. It also scores low in protecting threatened species (119th) and in the change of the forest cover (109th).

On the other hand, the US shows strong enforcement (18th) and stringency (21st) of environmental regulations, once in place. The country’s ranking in the dimension of environmental sustainability wasn’t much higher in the 2013 edition, where it was positioned at 112th.

Similarly to the US’ environmental sustainability performance in the Travel and Tourism index, the Happy Planet Index leaves the United States closer to the bottom end of its list of 140 countries. In 2017, the US was positioned 108th, mainly because of its extensive use of fossil fuels. It ranked especially low – 137th — for its ecological footprint. However, Americans’ well-being (18th) and life expectancy scored much higher (31st) in the 2017 study.

The overall performance of the United States in OECD’s Better Life Index 2017-18 is above average. The country ranks at the top in housing, income and wealth. It also ranks above average in many other dimensions, such as health status, jobs and earnings, or civic engagement.

The country only ranks below average in social connections and work-life balance, due to long working hours.

The US in online searches

How popular is the United States in global online searches?

The United States’ ranks second in Bloom Consulting’s 2017 Digital Country Index, having lost its 2015 leading position. The country leads in online searches for exports, and is also among the top for talent (2nd) and investment (3rd). Prominence (6th) and tourism (15th) rank slightly lower.

What influence has Trump’s administration had on the value of the nation brand USA?

According to the 2017 Nation Brands index, the USA is the most valuable nation brand in the world, with an approximate value of 21.055 USDbn. This is double the value of the world’s second most important nation brand, China (10.209 USDbn).

The study points out that, despite US’ leading position, in 2017 the growth of its brand value was a meagre 2% (compared to China’s 44%). This stagnation could be attributed to Donald Trump’s presidency being seen as increasingly unpredictable, which is having negative impacts on international perceptions of the US.

The study also highlights the decision to close borders to migrants and refugees, and breaching global commitments in relation to climate change as factors that have undermined the United States’ reputation as global leader.

How reputable is the US compared to its nation brand value?

Considering the great financial value of the US nation brand, the country’s reputation could be much better. It only ranked 38th in the 2017 Country RepTrak index. This is a rather poor result, especially compared to its neighbor Canada, among the top two for six years in a row.

The study points out that in 2017 the US was the country with the highest reputation drop, driven by important decreases in people’s perceptions linked to attributes such as effective government, social welfare or ethical and transparent country.

Enjoyed our summary of global rankings and indices on USA’s economic performance, its sustainability, attractiveness for digital nomads, brand strength and reputation? Thanks for sharing!