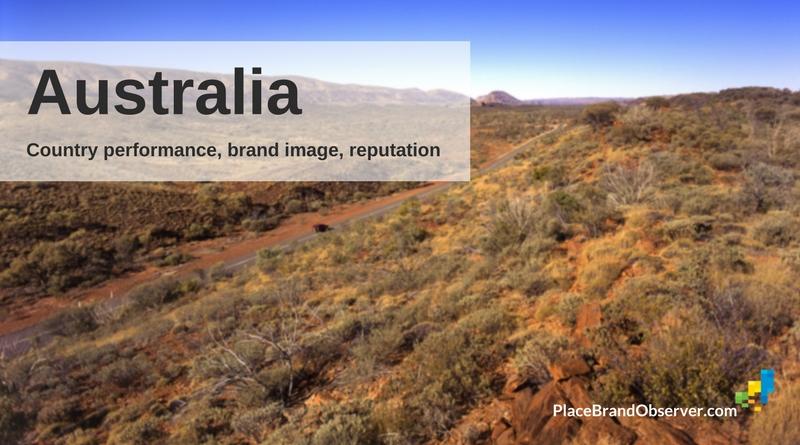 How much soft power has Australia managed to achieve, despite its geographical isolation? Are exports somehow influenced by the remoteness of the country? Read about the country’s reputation and competitiveness, and the performance of Australia as nation brand.

How easy is it to start a business in Australia, and how competitive is the country’s financial market?

Australia ranks 14th in OECD’s Ease of Doing Business index 2018. The country’s strongest asset is enforcing contracts (3rd), getting credit (6th) and dealing with construction permits (6th). On the other hand, trading across borders is more complicated and costly for businesses based in Australia, leaving it on the 95th position in this dimension.

In ten years’ time, Australia’s overall ranking has fallen five positions, in comparison to 2008. The biggest negative change has occurred in the dimension of across border trading, in which Australia ranked 34th a decade ago.

Australia’s overall ranking in the 2017-18 Global Competitiveness Index is 21st. Its strongest pillar is the development of its financial market (6th) and the level of higher education and training (9th). The country’s weakest pillars are infrastructure, business sophistication and labor— and goods market efficiency, all ranking 28th.

This index also shows a slight decay in Australia’s performance in terms of competitiveness. In the 2008-9 edition, its overall ranking was 18th. The biggest change has occurred in the efficiency of its goods market and labor market, which were ranked nine positions higher a decade ago.

How strong is Australia in attracting and retaining talent?

In terms of attracting and retaining global talent, Australia is performing well, ranking 11th in the Global Talent Competitiveness Ranking. Its performance is especially well valued in the dimension of global knowledge (6th), while the vocational and technical skills acquired in Australia could score better (24th).

How popular is Australia in global online searches?

Despite having fallen three positions in comparison to 2015, Australia is ranked on a very high 6th position in Bloom Consulting’s 2017 Digital Country Index. It scores highest in the dimension of prominence (2nd) which includes aspects such as governance, society and sports. Australia also performs remarkably well for the recognition of its talent (4th). Exports once again prove to be the country’s weakest performing pillar, ranking 13th in this study.

How much effort is Australia putting into improving its environmental sustainability?

The 2018 Environmental Performance Index ranks Australia 21st, which is eight positions lower than in 2016. One of the downsides of the country’s environmental performance is its huge livestock and the nitrogen pollution it causes. On the positive side, during the last years Australia as one of few countries has shown growth in reforestation.

Out of the 140 countries studied in the 2016 Happy Planet Index, Australia scored remarkably low –105th. This is mainly due to its big ecological footprint, which leaves the country at the penultimate position in this pillar (139th).

On the other hand, Australia ranks very high for its 82.1 years of average life expectancy (7th), as well as for its social equality (11th).

Quality of life in Australia

Is Australia a good place to live?

Australia’s performance in OECD’s 2017 Better Life Index is generally above average. It ranks at the top in civic engagement and above average in income and wealth, environmental quality, health status, housing, jobs and earnings, education and skills, subjective well-being, and social connections.

There’s only a considerable gap between the richest and poorest – the top 20% of the population earn more than five times as much as the bottom 20%.

Australians give their general satisfaction with life 7.3 points out of 10, which is higher than the OECD average of 6.5.

Is Australia a “good country”?

How much does Australia contribute to global well-being?

The latest Good Country index ranks Australia 23rd for its efforts of improving global well-being. Its contribution is biggest in the dimension of world order (6th) and health and wellbeing (13th).

However, the country’s efforts of improving worldwide prosperity and equality could be stronger, as the country ranks 102nd in this dimension.

Australia’s performance as “good country” according to this index has decreased during the last years, now eight ranks below its position in the first edition of this study.

How much global influence does Australia have thanks to its culture, education and enterprising?

According to Brand Finance, Australia is the greatest place to visit in the world, as determined in their 2020 edition of the Global Soft Power Index which ranks the nation 13th overall. Australia’s position is greatly linked to its strong performance in the people & values pillar as well its highest performer business & trade, both of which contribute to its reputation for tourism. Upcoming reports will make clear whether Australia’s criticism for perceived resistance to climate change action will affect its overall reputation and impact economic development and international relations.

How valuable is Australia as nation brand?

In 2017 Australia was among the 20 most valuable nation brands, ranking 11th in Brand Finance’s Nation Brands index. This is one position down from the 2016 edition. The study brings out that while Australia continues to perform well, inbound investments have been put at risk because of recent inertia over the reform to its taxation system.

Enjoyed our summary of global rankings and indices on Australia’s economic performance, its sustainability, attractiveness for digital nomads, brand strength and reputation? Thanks for sharing!