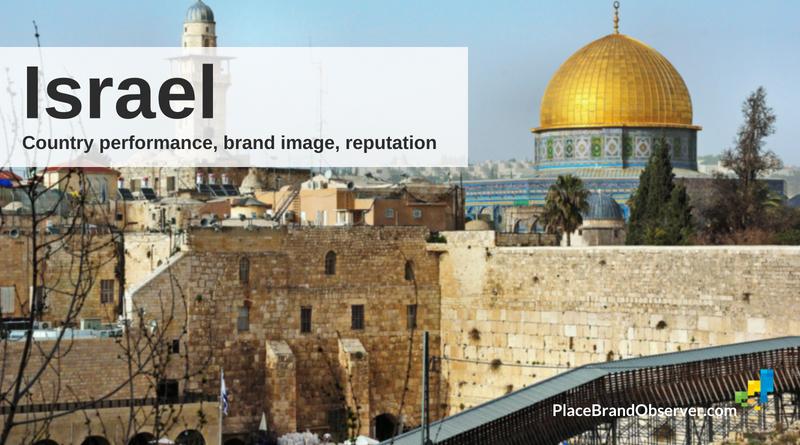 Israel: how does the country’s political status influence its performance in global rankings that measure talent attraction potential, public diplomacy and soft power strength, environmental sustainability and economic development? What influence have recent political developments had on the international reputation of Israel? Answers in this summary of global reports, studies and rankings on country performance, brand image and reputation.

What are the benefits of doing business in Israel?

Israel’s performance in two major indices that analyze numerous aspects of economic competitiveness shows rather contrasting tendencies. While the country has been descending in World Bank’s Ease of Doing Business Index, it has simultaneously improved its standing in the Global Competitiveness Index.

Israel’s ranking in the 2018 Ease of Doing Business index is moderate: in 2018 it positioned 54th. While the protection of minority investors ranks fairly high (16th) in this report, the performance of Israel’s other economic pillars is weaker. The most troublesome procedures are registering property (130th) and paying taxes (99th) in Israel, according to the study.

The country’s ranking has been deteriorating successively over the past decade. In 2008 it positioned 29th, in 2013 it was already nine positions lower, and by 2016 Israel had already fallen to position 53.

WEF’s Global Competitiveness Index 2017-2018 gives Israel a much higher valuation, ranking it 16th overall. The country’s strongest pillars, according to the index, are innovation (3rd) and technological readiness (7th). Israel’s market size (56th) and its macroeconomic environment (39th) are considered its weakest performers.

Israel has had a considerable ascent in this index during the last years. In 2013 it ranked 27th, by 2016 it had climbed to position 24, making an even bigger leap onto its current ranking (16th). The report suggests that Israel’s positioning as one of the most innovative economies in the world is the key to its recent improvement.

How influential is Israel in terms of innovation, human resources and culture?

Israel ranks 24th in the 2018 edition of the Global Talent Competitiveness Index. It is an important leader in terms of global knowledge, where it ranks 4th. Israel also makes it to the top-25 for vocational and technical skills (23rd) and talent retainment and enabling (both 24th). Howecver, the country ranks much lower (50th) for its ability to attract talent.

During the last two years, Israel has dropped out of the Soft Power Index that figures the thirty most influential countries in terms of soft power. Its last appearance was in 2015 when it ranked 26th, with special attention put on Tel Aviv’s “artistic, start-up, diverse, LGBT-friendly glory”.

How popular is Israel according to online searches?

The Digital Country Index 2017 ranked Israel 34th for the frequency of global online enquiries made about the country. This is an important six positions lower than in the previous, 2015 edition. In 2017, Israel’s strongest pillars were prominence (25th) and exports (26th), while investment (36th), talent (38th) and tourism (47th) scored lower.

How well does Israel look after its natural environment?

Israel scored fairly high in the 2018 Environmental Performance Index, ranking 18th. With this result, it was the regional leader of Middle East and Northern Africa. The country made an impressive leap from position 49th in the previous (2016) edition.

WEF’s evaluation of Israel’ environmental sustainability in the 2017 Travel and Tourism Competitiveness Index is a lot more critical –it scores 91st out of the 134 countries surveyed in this study. Israel’s poorest indicators are baseline water stress (122nd), environmental treaty ratification (115th) and particulate matter concentration (103rd). The only high-performing dimension in this study is Israel’s wastewater treatment, ranking 10th.

How does Israel perform in reports of social well-being?

Israel performs well in various measures of well-being, in the 2018 Better Life Index. The country ranks above average in income and wealth, jobs and earnings, personal security, health status and subjective well-being. However, it scores below OECD average for the indicators education and skills, housing, environmental quality, work-life balance, social connections and civic engagement.

Israel ranked 54th in the 2016 Happy Planet Index. It stands out for equality (10th) and high life expectancy (8th – an average of 81.9 years). Its score for well-being is also high, ranking 14th out of the 140 countries included in the study. Here, Israel’s weakest pillar is its ecological footprint, which leaves the country at the bottom of the report, at 128th position.

Israel’s performance in the Good Country Index is moderate, ranking 53rd in its latest edition. Due to its aggressive politics towards Palestine, Israel’s performance is poorest in the dimension of international peace and security, where it ranks 123rd out of the 163 participant countries. Israel’s global contribution to prosperity and equality also receives a poor valuation, ranking 99th. Its best performing pillars are planet and climate (25th) and science and technology (31st), which are the only dimensions that score above the top-50 in the Good Country Index.

Israel ranked 32nd in the 2017 Corruption Perception Index, which is one position above Botswana and one below Taiwan. Compared to its neighbours, Israel’s performance is good. While the eastern neighbour Jordan positions 59th, Lebanon (143rd) and especially Syria (178th) are left in the very final end of the ranking that studies 180 countries.

How well is Israel performing as nation brand?

Brand Finance’s 2017 Nation Brands Index ranked Israel 41st in its annual study of the value of nation brands. According to the report, in 2017 the value of Brand Israel showed a 19% growth, reaching a value of $189 USDbn.

The performance of Israel in the Country RepTrak is similar, ranking 42nd in its 2017 study.

Enjoyed our summary of global rankings and indices on Israel’s economic performance, its sustainability, attractiveness for digital nomads, brand strength and reputation? Thanks for sharing!