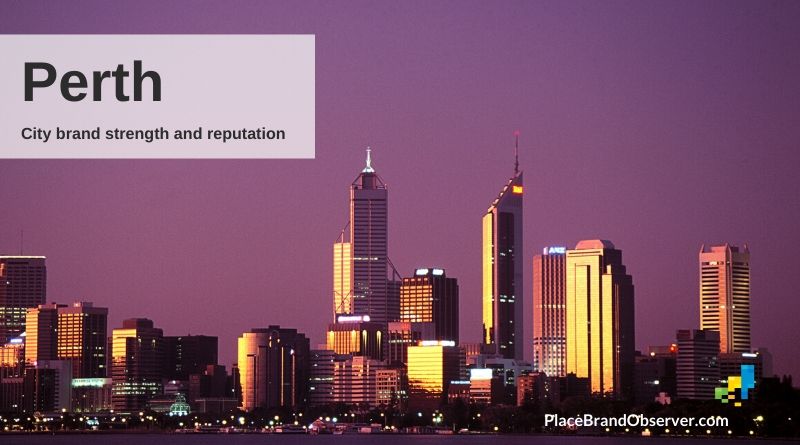 Perth, the capital city of Western Australia, ranks well in terms of livability and attractiveness for students. But does Perth’s lagging urban environmental sustainability impact its opportunity for economic growth in a competitive global landscape of reputable city brands? Find out in this snapshot of global indices and rankings measuring city performance, brand strength and reputation.

The 2019 edition of the Economist’s Global Livability Report ranks Perth 14th, not making it into the top 10, unlike Australian counterparts Melbourne, Sydney and Adelaide.

The Mercer Quality of Living City Ranking ranks Perth 21st alongside Montréal, and behind Ottawa and Hamburg who tie for 19th. Mercer’s report takes into consideration quality of life factors such as climate, disease and sanitation standards, ease of communications, physical remoteness and local political and social environments. That said, Perth remains ahead of both Nuremberg and Stockholm (23rd).

Perth’s livability for digital nomads is average, judging by the Nomad List which gives Perth a 3.6 out of 5. Perth’s strongest assets, according to this study, are walkability, resident happiness, A/C or heating, female friendly, English speaking, places to work from and friendly to foreigners.

Perth: how innovative and sustainable?

The Innovation Cities Index (2019) ranks Perth 101st, jumping four positions since the last publication (2018) and thus landing just behind Honolulu (100th) and ahead of Indianapolis (102nd). 162 indicators are used for this benchmark study by 2thinknow, covering 31 industry segments within each city.

The Australian Conservation Foundation’s Sustainable Cities Index (produced in 2010 and which is exclusive to Australian cities) ranks Perth 20th out of 20, illustrating that the Western Australian capital still has a long way to go towards urban and environmental sustainability.

World’s Best Cities Report (2020) by Resonance Consultancy ranks Perth 63rd, with the highest-ranking asset being its people. In ranking people, Resonance is looking at human capital in terms of diversity, percentage of foreign-born residents, and educational attainment, percentage of the population with a bachelor’s degree or higher.

Enjoyed our summary of global rankings and indices on Perth’s city brand strength, its reputation and sustainability, as well as attractiveness for students and remote workers? Thanks for sharing!