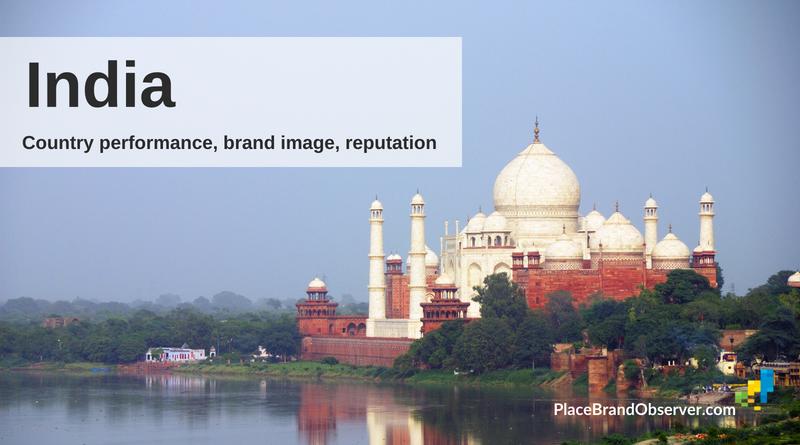 India: how does the world’s second-most populated country perform in terms of economic attractiveness and sustainability? Does India’s fast-growing population affect the country’s talent competitiveness? What do international rankings say about life quality in India? Answers in this summary of global reports, studies and rankings on country performance, brand image and reputation.

Ease of doing business in India

What are the pros and cons of setting up business in India?

India has shown an important ascent in this year’s Ease of Doing Business index, where it has improved its ranking by thirty positions compared to 2016. In 2018, its overall ranking is 100th.

The country shows high interest in protecting its minor investors, ranking 4th in this sub-index. It also makes getting credit and electricity easy for investors (both 29th). However, India’s performance in the rest of the sub-indices leaves it out of the global top-100. The most problematic aspects of doing business in India seem to be getting construction permits (181st) and enforcing contracts (164th).

India’s positioning in WEF’s Global Competitiveness Index is much higher, ranking 40th in the 2017-18 edition. Despite having fallen one position compared to last year’s edition, the country has been improving its performance over the last five years by twenty positions.

As the second most populated country in the world, India’s strongest asset is the size of its market, where it ranks much higher (3rd) than in other pillars. Technological readiness (107th) and health and primary education (91st) are India’s weakest performing sectors, according to the WEF study, that impede the country’s global competitiveness.

Is corruption a big issue in India?

India has been maintaining a fairly steady performance in Transparency International’s Corruption Perception Index, ranking 81st in 2018, together with Ghana and Morocco. While India’s big neighbour China ranks slightly better (77th), its other neighbour, Pakistan, positions much lower on the scale of transparency (117th).

Talent and innovation in India

How well is India doing in attracting and retaining talent?

How well is India performing as nation brand?

India is ranked 33rd in the 2017 Country RepTrak study of the world’s most reputable countries. After Greece, UAE and Egypt, India showed the biggest reputation improvement in the last year, up 10,5%.

In 2017, India was the 8th most valuable nation brand in the world, as Brand Finance’s Nation Brands index reports. Contrary to the global trend, India’s nation brand value dropped 1% in the last year, estimated to be worth 1,046 USDbn. While the newest edition of their reportage ranks India 27th in the Global Soft Power Index 2020.

India ranks rather poorly across all five environmental risk factors which are measured by the Environmental Performance Index. According to the 2016 study, almost 75% of the population are exposed to unsafe particulate matter in the air. The new air quality policies implemented in 2015 don’t seem to have improved India’s air pollution issues, as its overall ranking has been deteriorating, going from position 141st in 2016 to 177th in 2018.

India’s environmental sustainability doesn’t rank much better in WEF’s 2017 Travel and Tourism Competitiveness index.With an overall ranking of 134th among 136 countries, India is located at the very end of the index in the dimension of sustainability. The study also considers air pollution to be India’s biggest environmental problem (ranking 135th).

India as a good country

The 2017 Global Peace Index points out that India is among the countries that have displayed the most significant growth in heavy weapons capabilities over the last thirty years. Despite this fact, India has improved its spot in the peace index by four positions, ranking 137th in the 2017 study. This has largely been due to a reduction in violent crime, driven by increased law enforcement.

In terms of the economic cost of violence measured in % of GDP, India is the world’s 70th biggest spender on fighting violence.

India ranks 59th for its overall contribution to global well-being, according to the Good Country index. While the country has much potential to improve its performance in prosperity and equality (ranking 133rd), the study assesses India much higher in terms of international peace and security (32nd) and health and well-being (35th).

How popular is India in online searches?

India has been maintaining a steady 11th position in the last two editions of the Digital Country Index. According to the 2017 ranking, it was especially popular regarding online searches linked to investment (2nd) and exports (4th). Prominence (14th), talent (16th) and tourism (17th) rank somewhat lower, but still show that there is strong interest in India in those areas.

How happy are people living in India?

The 2018 World Happiness report positions India rather low, ranking it 133rd among 156 countries. Contrary to many European countries, in India, the foreign-born show a higher level of happiness (91st) than those born in the country.

The Happy Planet Index, in its analysis of countries’ happiness according to indicators of sustainability, ranks India 50th in its 2017 study. The country scores rather low for life expectancy (101st), inequality (103rd) and well-being (104th). On the other hand, it ranks much higher for its relatively low ecological footprint per inhabitant (19th), probably due to the size of its population.

Enjoyed our summary of global rankings and indices on India’s economic performance, its sustainability, attractiveness for digital nomads, brand strength and reputation? Thanks for sharing!