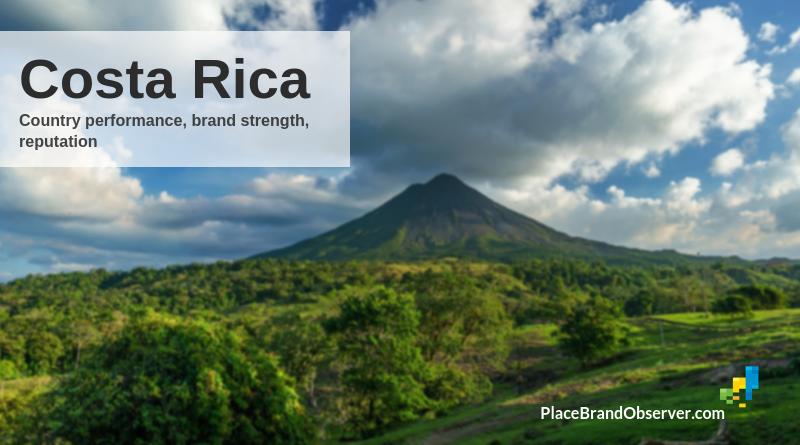 Costa Rica: What is it like to not have an army? Does it affect perceptions of Costa Rica abroad? Is this a good country to live in, or to travel to? Is it a good decision to invest in Costa Rica?

Join us as we explore those and more questions in our investigation of reports and indices about Costa Rica’s economic performance, its brand strength and reputation.

The Global Competitiveness Report by the World Economic Forum, in its last edition places Costa Rica in an overall 47th position, out of 137 countries. According to this report, Costa Rica is performing very well in areas such as health and primary education, higher education and training, and market efficiency. Overall, Costa Rica performs above Latin America average in all the areas that the reports measures.

On the other hand, the study points out that Costa Rica faces some issues with efficiency and government bureaucracy, supply infrastructure, tax rates and access to credit. These potential shortcomings were identified by business persons in the report’s executive opinion survey.

Costa Rica is ranked 67th in the Ease of Doing Business report by the World Bank, which primarily looks at regulations affecting businesses. The country is a top performer in Latin America and the Caribbean region. Nevertheless, the report indicates that it is comparably difficult to start a business in Costa Rica, especially regarding construction permits and protection of minority investors.

On a more positive note, regulations are considered good when it comes to getting credit, electricity and registering a property.

Costa Rica’s score has been dropping in the Corruption Perception Index by Transparency International. Since 2012 through 2017, the country dropped 5 points. It is currently ranked in the 38th position, according to the 2017 edition of the index. This performance is similar to the wider region.

Costa Rica is considered a full democracy in the Democracy Index 2018 by the Economist Intelligence Unit. This is a high recognition for the country, especially because only Uruguay and Costa Rica are considered full democracies in the region. Globally, the country is ranked 20th, with strong performance in functioning of government, political culture and civil liberties.

The Global Talent Competitiveness Index ranks Costa Rica 35th – an overall acceptable performance. Costa Rica performs very well when it comes to talent attraction, talent growth and VT skills. There are other areas in which Costa Rica performs well, like retaining and enabling talent. Overall, the country is a top performer in talent competitiveness, when compared to the Latin American region.

Given the fact that Costa Rica does not have a military institution, its global presence – as measured by Elcano Institute’s Global Presence Index – is not significant. The country is ranked 89th overall. Its scores are equally low in the areas of soft power and economic presence, with a 75th and a 81st position respectively.

According to the Digital Country Index by Bloom Consulting Costa Rica is placed in the 41st position in in terms of digital searches in the web. This means a drop of 3 positions compared to the report’s previous edition. The country is ranked 8th among the Latin American region.

Digital searches for Costa Rica are mostly related to tourism, talent and prominence.

Costa Rica is ranked in the 30th position in the Environmental Performance Index by Yale University. This is a good performance compared to most other Latin American countries.

Costa Rica performs well in the following areas: air quality (gaining two position since the previous report), fisheries and forests (an area where the country had some good improvement).

According to the index, Costa Rica is not a very good performer in air pollution, agriculture, water resources and biodiversity & habitat.

Costa Rica: how competitive as destination?

Costa Rica is improving its tourism industry, according to the Travel & Tourism Competitiveness Index (2017 edition). The country gained four positions since the previous report, which means that Costa Rica is now the 38th country in the rank. The study puts this down to good performance in key areas, such as safety & security, human resources & labor market, international openness, prioritization of T&T and natural resources.

Some other areas are not doing well in Costa Rica, such as cultural resources and ground & port infrastructure. Overall, the country ranks 5th in the region, which shows room for improvement but can be considered acceptable.

For the third time in the last ten years, Costa Rica is placed in the 1st position of the Happy Planet Index. According to the index, Costa Rica is doing very well by spending more in pensions, health and education thanks to the abolishing of its army. This can be seen by a high rank in Life Expectancy (30th position) and Wellbeing (10th position).

However, the study stresses that Costa Rica still has some work to do to improve its ecological footprint and inequality, the country’s wealth not being well distributed across its population.

Costa Rica performs especially well when it comes to its contribution to global wellbeing. According to the Good Country Index, the country is placed in the 34th overall position, out of 153 countries. This a result of a top performance in culture, international peace & security, world order and prosperity & Equality.

Performance in the areas of planet & climate and science & technology is considered good as well.

The Global Peace Index puts Costa Rica in the 40th position, with a drop of 6 positions compared to its previous edition. However, Costa Rica’s performance is considered high. This drop can be explained by the deterioration of political peace inside de country. Still, it leads the ranking in the region of Central America and the Caribbean.

The 2018 edition of Brand Finance‘s Nation Brand report places Costa Rica as the 78th most valuable country brand on Earth. This means an increase of 5% in its value, but a drop of 2 positions compared to the last edition of the report. The overall score for Costa Rica’s nation brand performance is AA-, which can be considered good.

Enjoyed our summary of global rankings and indices on Costa Rica’s economic performance, its sustainability, attractiveness for digital nomads, brand strength and reputation? Thanks for sharing!