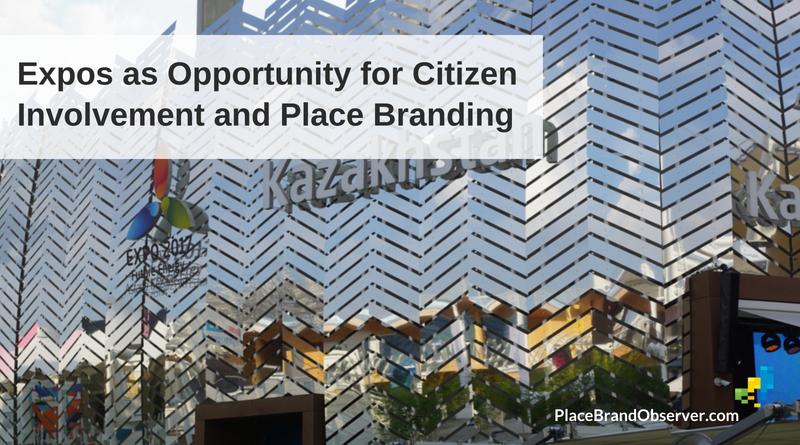 Expos as opportunity for citizen involvement and place branding was the topic of research presented by Magdalena Florek and Marta Herezniak in a recent article published in the academic journal ‘Place Branding & Public Diplomacy’. We caught up with them to find out more about the research findings and implications for Expo planners and city managers.

Magdalena, Marta – Why do cities apply to become hosts of Expos? What motivates them?

There are a number of reasons for cities to do that, both external and internal. Externally, cities usually seek to raise their profile internationally, mainly to attract foreign capital, tourists and talents. But they also seek to improve their position within the country, for example to obtain additional funding from the central government.

Internally, events such as Expos have a considerable potential to raise local pride, but also for cities to reinvent themselves for the local citizens. From the moment cities apply to become the host of an Expo, even before they are officially nominated as candidate city, and later when they move from candidacy to the final results – this tends to be one of the most energetic times, where many processes related to urban development are accelerated and accompanied by unprecedented levels of mobilization on the part of the city stakeholders. It is one of these moments where cities define their vision and strategic direction.

Sometimes, the vision and momentum remains strong, even if the city failed to succeed with its Expo bid. This happened for instance in the Polish city of Łódź, which came second in the competition for Expo International 2022/23, with the theme of urban revitalization.

How can cities involve the local community in their Expo strategies – before, during and after the event?

Community involvement in necessary at various stages of Expo preparation and execution. Mainly because it is the community buy-in that gives credibility and legitimacy to the entire effort. Internal stakeholders are the ultimate generators of ideas and solutions that are not only relevant for the Expo event, but also wanted and expected by the community itself.

Regardless of the benefits which Expos bring to the communities, such mega-events can be, and are in fact, disturbances in the everyday life of citizens. It can happen that the community develops a hostile attitude towards Expos because of this, and also because the authorities fail to communicate with the citizens in a fair manner, or don’t involve them in the co-creation of Expo-related ideas.

Besides, in the era of digital media, the community is going to be involved anyway and is free to express its opinions across the internet. How will authorities channel this involvement to the benefit of the community and the event as such, is a real challenge.

When it comes to the methods and instruments of involvement, we believe it is necessary to tailor them to the nature of the Expo and of the city itself. Naturally, Expos are always related to intense volunteer recruitment, which is one of the good ways to connect with the community prior to the event, as are special trainings for the stakeholders – including tourism and hospitality industry and public servants.

Also, special programmes for schools, like the Oceanofilia Project and See Clubs that were set up in Lisbon, are always beneficial. They teach social participation from early years on and give a possibility to include children of diverse social backgrounds.

Overall, the key is to design involvement schemes that go beyond the event itself and offer the possibility to sustain citizen activity in the following years. One such project that we came across during our research was Milan’s Cascina Triulza, which is a space dedicated to stimulating the engagement of various local stakeholders (young people, artists, entrepreneurs, civil society organizations etc.) through strengthening bottom-up initiatives and the self-organizing abilities of the community.

What impact does an Expo have on the identity of a city as community?

Expo applications offer a broad range of possibilities to strengthen the community, tangibly and intangibly. Firstly, such large-scale events require a lot of investment in infrastructure and, depending on the main theme, also revitalization of certain parts of the city. This kind of city re-making has also an important community-bonding function – it offers residents new public spaces that enable them to take part in the life of the community which, in turn, can boost their attachment to the city.

During all stages of preparation for an Expo, grassroots initiatives are created or strengthened, and networks of stakeholders are formed to contribute to the realization of Expo-related goals. These bonds and networks often last beyond the event, which can positively affect the dynamics within a community.

In the longer run, Expo cities’ communities may also benefit from more employment opportunities and better access to culture. Intangibly, being a candidate city opens up possibilities to discuss issues related to place- and citizen identity and to (re)define a city and its community in a way that will provide a roadmap for the future.

Would you consider Expos a useful tool for city branding, e.g. strategic measures aimed at attracting or retaining talent, investors, residents? Or are they more of a short-term city marketing opportunity?

Of course, before each Expo, estimations are made regarding its impact on the city’s development. For example, analysts believe that Dubai will hugely benefit from the Expo 2020 in terms of tourism and infrastructure development. The government is expected to spend $7 billion to develop the infrastructure, which should considerably boost industrial development and the real estate market.

According to Bank of America Merrill Lynch, this spending will equate to a 0.5 percent increase in Dubai’s GDP in the years 2016-2019. It is also predicted that the Expo will stimulate the creation of 277,000 jobs in Dubai (20% of the existing workforce) and attract more than 25 million visitors to the UAE.

Whether an Expo is a useful tool for city branding largely depends on the initial situation of the specific city. Undoubtedly, cities with poor awareness may treat Expos as some sort of a touchpoint around which they will build an attractive image. At a subsequent stage, it will be possible for these cities to target activities at specific groups.

Well-known cities that enjoy higher levels of recognition, will resort to Expos to achieve specific goals, such as drawing attention to a specific element of their offer, an aspect of the image, or to attract a specified target group.

Expos may also pose a good opportunity to say more about a city, or put it in a different light. Frequently, the intention of organizing an exhibition has also a strategic aspect. For example, when applying for organization of the thematic exhibition in 2022/23, Łódź suggested the keynote topic to be “City Re:Invented”, referring to urban revitalization. After all, Łódź is an example of post-revitalisation city revival, where comprehensive revitalization of urban areas refers to the city’s traditions and history (which are important for branding), but still needs development. The city intended to make use of this subject in the narration, as well as in specific future activities, investments etc.

Notably, the very application for organising such an event is in itself a marketing opportunity, seized by many cities and used in marketing communication.

What about the political economy of Expos – is it actually the cities who are in charge? Or does central government tend to dominate strategy, promotion and event management?

In our research we didn’t focus on the political dynamics behind Expos. Surely, the application process in itself is very politicized and there the central governments may take the lead. But the nature of the city-country relationship depends on cultural and political factors.

Important from a place branding perspective is that there has to be a consensus between the local and central government about the theme of the exhibition, and that both parties see it as relevant and beneficial.

Cities take charge when it comes to the creative/conceptual part of Expo application and execution. They should be given as much freedom as possible to decide upon the non-political elements of the process, including stakeholder involvement.

As we seem to move from countries and nation states to cities as main players internationally, do you think that it will soon be City Expos – cities presenting and showing off, rather than countries?

It seems difficult to implement such an idea for a simple reason, namely the large group of cities in general which would have to be shortlisted, coupled with the economic inequalities among them that would result in various possibilities of the cities to present themselves.

However, maybe the importance of cities will be growing in the case of thematic exhibitions, where cities’ achievements will be important enough to call for special attention.

Which topics linked to Expos, city branding and community involvement would you consider important for future research?

Definitely, a further and broader exploration of the methods and instruments and their effectiveness is necessary, both in the real and virtual environment. More research is also needed on what stimulates citizen engagement in these types of events, and what discourages it.

One of the important themes to explore further is also what kind of internal stakeholders are usually the ones to be engaged, and what can be done to broaden the scope of people and organizations involved.

Regarding the Expo itself, it would be beneficial to analyse what benefits are sought by the communities and by the authorities, and where are the most significant gaps in the needs and expectations of both these groups.

The Place Brand Observer has teamed up with the journal’s publishers, Springer and Palgrave Macmillan, to share with you key research insights and findings.

Learn more about the journal or read the interviews with the journal editors, Robert Govers and Nick Cull.

Enjoyed this research insight into how expos can serve as opportunity for citizen involvement and place branding? Spread the word! 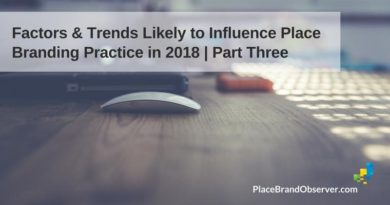 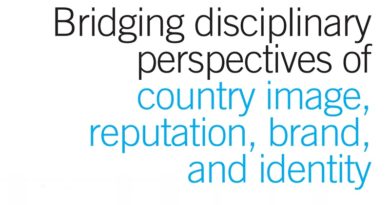 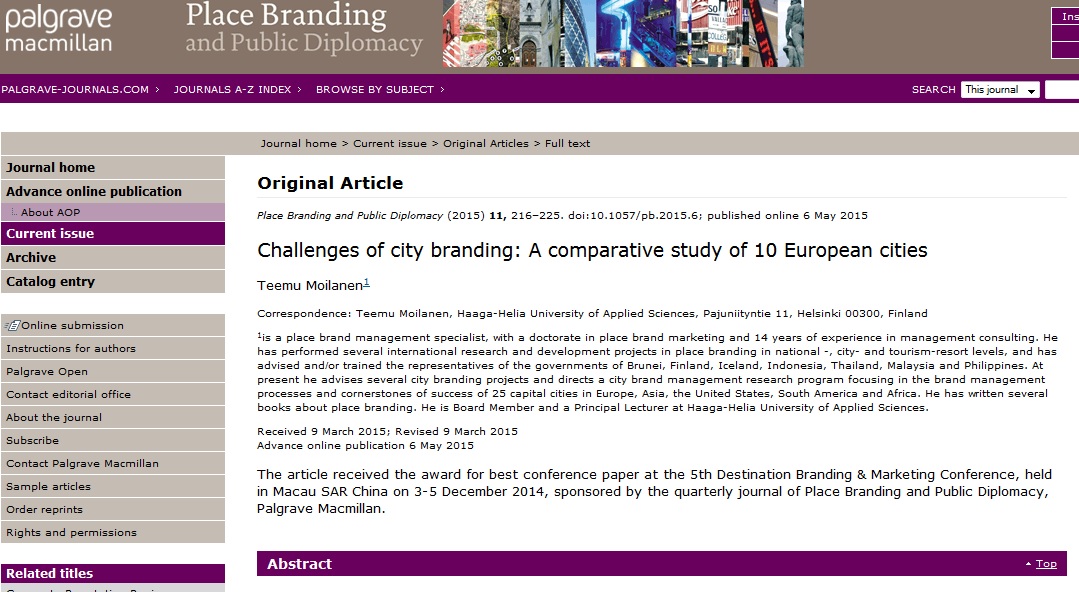