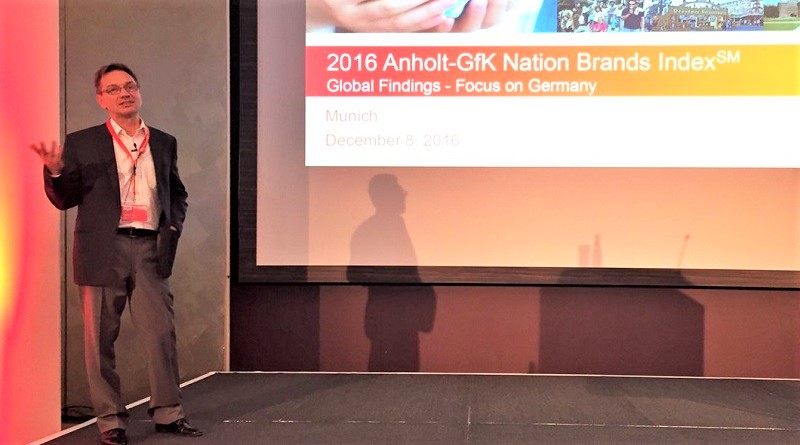 Vadim, as Global Director of the Anholt-GfK Nation Brands Index, you are in constant touch with public opinion, especially linked to the image and perceived performance of countries. Do you remember when you first came across the idea of countries – or nations – as brands? What led you to your current role?

In my 20-plus years of practicing brand research, I frequently conducted surveys and qualitative work around the concepts of image and reputation, mostly related to companies and organizations. In my mind, company or organization “brands” and brands of their products and services are not identical and require different analytical frameworks.

That’s the paradigm I followed before meeting Simon Anholt, who pioneered an idea of applying this branding notion to nations or groups of nations, such as EU or NATO.

The other stream of experience that led me to a role of “nation brand expert” is my continuing work on public opinion polling around the world, where we often ask questions such as what people of nation X think about policies, leaders, and culture of nation Y, exploring affinities and hostilities in opinions about other countries and cultures.

In partnering with Simon, the road met the rubber, so to speak, as my work on reputation and public opinion research informed my conversations with governments and analysis of their nations’ image, using the Anholt model, and beyond that in more custom nation brand and image measurements.

We share the core idea that nations have to communicate truthfully about their assets and not mask difficulties and things that are still “work in progress.”

How has your view on country/nation brands changed over time?

Events do have an impact. NBI is sensitive enough to capture noticeably year-to-year movement on key measures for some countries, apparently reflecting the global public’s reaction to major events (e.g., elections, economic or political turmoil) with high international visibility. That said, national reputations tend to revert back after the impact of dramatic events has faded.

This does not mean that nations are locked in their reputational “cages.” Communications do help improve awareness and spread a good word about a nation’s assets and its progress.

Communicating effectively is very important for how a nation is perceived globally. Yet, for this to happen, these assets should exist in reality and positive changes should actually happen.

As an expert in Russia, how has the country’s nation brand evolved over the last years?

Russia is a good illustration to the notion of relative reputational stability. Historically, the strongest pillar of its reputation is Culture, while Governance is a key detractor. In 2014, with a crisis in Eastern Ukraine at its peak and Russia blamed for its role in the conflict, its NBI score showed the strongest drop in a decade. Russia’s appeal as a tourist destination and perceptions of its cultural attractions suffered, along with governance, as might be expected.

Yet, all 3 index dimensions – Governance, Culture, and Tourism bounced back practically in unison after the 2014 crisis. We have observed similar bounce back patterns in Egypt after the “Arab Spring” and in Greece, following the debt crisis.

In a nutshell, what is the Nation Brand Index about?

In 1996, Simon Anholt coined the term “nation brand” and from 2008, Anholt and GfK entered in a partnership to offer the Anholt-GfK Nation Brands Index to governments and their agencies as a resource to understand how the world perceives their nations as attractive destinations for trade, investment and tourism.

NBI shows how their image and reputation differ from other nations. We advise on what is misunderstood, exaggerated, or not known at all about them on the global scene. Analysis is unique for each country.

The study is done annually: approximately 20,000 adults aged 18 and up are interviewed in core panel countries in the summer to measure the image of 50 nations. We release key findings each fall.

In your view, how has the practice of nation branding evolved in recent years – for instance in the former Soviet Union, which you know well?

Nation branding has evolved into an opportunity for countries to forge a national narrative and identity, one that can be shared as an experience with the rest of the world.

The most interesting aspect of this evolving image of the Czech Republic, Hungary, Poland, and Ukraine is their governance, which is the foundation work allowing them to emphasize other aspects of their image in the future.

What role does social media play nowadays regarding people’s perceptions of nations – their own and foreign?

Social media has radically shifted the way in which people consume media, in particular, news and perceptions on other nations and cultures.

The most important change is the shift in the source of information: from a generally centralized top-down structure to a globalized bottom-up sharing system.

Social media personalities and influencers become of vital importance to the perception of nations, since these sources inform and shape the opinions of consumers through virtual experiences.

Social media allows for these experiences, both positive and negative, to be magnified and broadcasted to a captive global audience.

Countries with strong reputations are those that excel in multiple indices, denoting a well-rounded and robust image. For example, Germany and the United Kingdom both enjoy the strongest reputation levels, not only because they rank 1st and 3rd overall in the NBI respectively, but because they consistently make appearances in the top-5 lists across the board.

Germany currently ranks in the top-5 in five out of six indices: Exports, Governance, Culture, People, and Immigration & Investment.

The United Kingdom currently ranks in the top-5 in four out of six indices: Exports, Culture, Tourism, and Immigration & Investment.

Other nations with strong reputations are Canada, France, Italy, Switzerland, and the United States, which currently rank within the top-5 nations on half of the indices.

Are there any research programs or institutions focused on nation brands and country reputation which you’d recommend our readers to keep an eye on, apart from GfK’s Nation Brands Index?

There are various programs and institutions doing great work to measure nation brands and country reputation. Apart from GfK’s NBI and CBI [City Brands Index], I would recommend the following two programs for your readers to keep an eye on:

This effort provides a fresh new perspective, challenging the classical notion of a country’s role in the world. This is a good complement to NBI, as Good Country’s assessments are based on actual statistics around nations’ behaviour towards other nations and their role played globally around such universal challenges as environment and peace.

Perception of a nation’s government may be the first stop when forming an opinion about a nation, regardless of how familiar someone actually is with any given nation.

Previous interviewees pointed out that city brands are becoming more important than country brands. Do you share this assessment? Should we pay more attention to cities as the – perhaps – more progressive policy makers and leaders?

While it is important to pay attention to city brands, it would be a mistake to say that one is more important than the other.

Cities can have their own identities, which can sometimes be considerably distinct to the national identity; but cities do not exist in a vacuum. Implying that just one city can be representative of the rest of a nation is a dangerous assumption.

Both metrics are equally valid and useful, particularly when planning a branding strategy. For this reason, GfK conducts both the Nation Brands Index (NBI) and the City Brands Index (CBI). These two studies capture a broad picture and can help provide policy makers and leaders with vital data needed to make informed decisions regarding the branding of their city or nation’s image.

To your mind, to what extent does “Good Country” performance influence people’s perceptions of countries? Do you see correlations between the Good Country Index and the Anholt-GfK Nation Brands Index?

The way I see it, the point of the Good Country Index is not to pass judgement on nations or influence people’s perceptions of countries. This as a policy influencing tool with potential to help generate positive change, opening up a new line of discourse by challenging the classical notion of what countries should be.

Connect with Vadim Volos on LinkedIn or read the latest edition of the Nation Brands Index here.

Enjoyed our interview with Vadim Volos on country reputation and the Nation Brands Index? Spread the word!