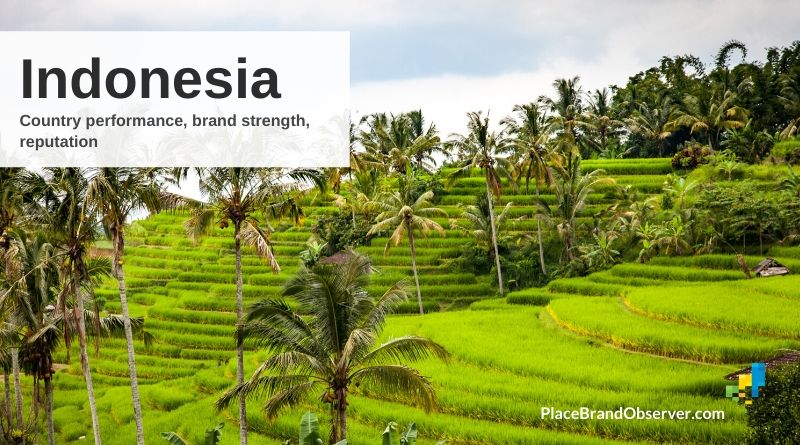 Indonesia: how does the almost 270 million-inhabitants counting country in Southeast Asia with over seventeen thousand islands (including the well-known Java, Borneo and Sumatra) fare in terms of economic performance, attractiveness for investors, talent, visitors? Join as we explore what global rankings and indices have to say about Indonesia, its brand strength and reputation.

Quality of Life in Indonesia

Indonesia’s people enjoy a ranking of 71st by the Economist Quality of Life report. In terms of World Happiness (2017-2019) Indonesia is seated 84th, just behind Malaysia (83rd) and Vietnam (84th).

Contribution in terms of Environmental Performance can best be seen through a microcluster of Bhutan, Vietnam, and Indonesia, ranking 131st, 132nd and 133rd respectively. The three nations make up the 15th, 16th and 17th spots within the Asia region. The Happy Planet Index ranks Indonesia favorably in terms of its ecological footprint, comparatively well-positioned as 41st out of 140.

Is Indonesia a “good” country for the world community?

Indonesia ranks 37th in the Good Country Index in terms of international peace and security, followed by health and wellbeing (50th) and global contribution to world order (61st).

Impressively so, Indonesia ranks among the top 10 countries of the World Giving Index (2019), which has increased its score by an average of 19 points over the last decade. Indonesia is the only nation to have improved over recent years in comparison with fellow members of the leader board.

Taking “a snapshot of the global state of peace”, the Global Peace Index (2018) analyzes trends in peace, economic value, and development of peaceful societies – ranking Indonesia 55th out of 163 nations.

Most impressively, Indonesia is seated as the 2nd least affected country in terms of the economic cost of violence, in the Economic Value of Peace ranking (2018).

In terms of business regulations, Indonesia ranks 73rd according to the Doing Business report of the World Bank Group. The Global Competitiveness Report (2019) seats the nation 50th out of 141, with its closest Asian competitor, Thailand holding the 40th position.

Indonesia holds a coveted position on the Nation Brands 2018 report, ranking among the top 20 most valuable brands. The United States, China, and Germany hold the first, second, and third spots respectively, while Indonesia is seated 16th.

In reference to Indonesia’s strength in performance to appeal and attract via culture, political values, and foreign policies, the Global Soft Power Index 2020 ranks the nation 41st.

Enjoyed our summary of global rankings and indices on Indonesia’s economic and environmental performance, its “good country” credentials as well as the nation’s attractiveness for investors and talent, its brand strength and reputation? Thanks for sharing!