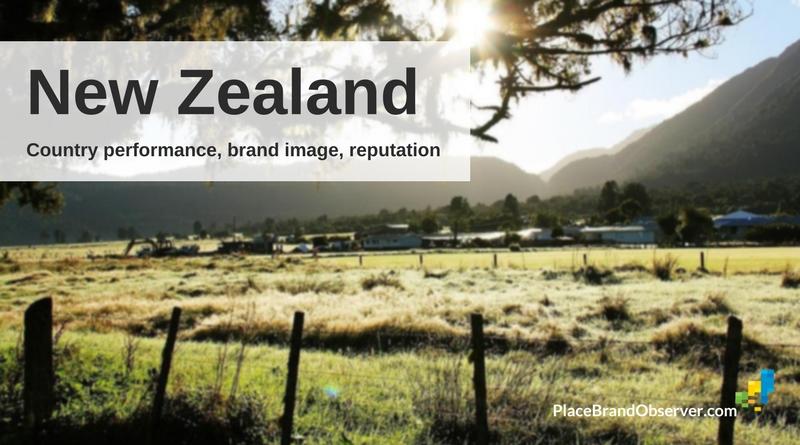 New Zealand: how does this “clean and green” country perform in global rankings that measure talent attraction potential, public diplomacy and soft power strength, environmental sustainability and economic development? Why does the remote island nation have the fame of being a good place for doing business? Answers in this summary of global reports, studies and rankings on country performance, brand image and reputation.

With thanks to our friends and knowledge partners Bloom Consulting and Brand Finance for supporting our country profiles by contributing the latest research insights and benchmarking data.

Is New Zealand an attractive place for new businesses and entrepreneurs?

For the fifth consecutive year, New Zealand leads the ranking of the World Bank’s Ease of Doing Business Index. In 2020, the country holds the first position in various dimensions of the study, including starting a business, getting credit and registering property. According to the index, minority investor rights are also very well protected (3rd) in New Zealand, and dealing with construction permits is much easier (7th) than in the rest of the 190 countries evaluated by the World Bank in this study.

New Zealand only shows weaker performance (63rd) in the dimension of trading across borders, due to its remote location. The country has been at the very top of this ranking for a decade already and is thus an important competitor to whichever national economy when it comes to attracting businesses.

WEF’s Global Competitiveness Index ranks New Zealand 19th in its 2019 study. Confirming the results of the Ease of Doing Business index, this study also gives New Zealand the leading position for macro-economic stability. Another important pillar for facilitating business – the efficacy of institutions — also ranks very high (3rd). High scores are also given to the efficiency of its labour market (5th) and product market (3rd).

The country scores lowest for the size of its market (66th).  New Zealand’s performance in this index has improved during the last decade, up from 24th in 2008 to the current 19th position.

Is New Zealand attractive for talent?

New Zealand’s overall ranking in the Global Talent Competitiveness Index 2020 is 10th. This is two positions up from its 2017 result and four positions better than half a decade ago, showing that the country is constantly improving the conditions for its talent.

New Zealand is among the top 20 in the enable (12th), attract (5th), and global knowledge skills (17th) pillars. The country performs consistently well in the regulatory landscape (2nd) under the enable sub-pillar.

Once again, New Zealand is ranked 1st for ease of doing business. Nevertheless, there is room for improvement in other variables related to the market landscape, such as cluster development (34th) and R&D expenditure (30th).

How much soft power does New Zealand have globally?

New Zealand ranks 16th according to Brand Finance‘s Global Soft Power Index 2021. Punching above its weight, New Zealand is commended for its high-ranking position given its population and isolated location. Recent years have shown exponential growth in reputation, notably due to globally recognizable governmental leadership, though not excluding its 26th position in the sports category among the general public. New Zealanders equally contribute to a strong reputation through the People & Values pillar, ranking 3rd worldwide.

Is New Zealand a popular enquiry in online searches?

New Zealand’s ranking in Bloom Consulting‘s Digital Country index is similar to its position in the Soft Power index – 16th in the 2017 study. There has been a significant improvement in the country’s digital performance compared to 2015 when it ranked three positions lower. Its performance is strongest in searches linked to talent (8th) and prominence (9th), while exports (34th), investment (29th) and tourism (21st) score lower in this study, which focuses on online searches performed around the world.

Is New Zealand a sustainable country?

New Zealand is the regional leader in terms of environmental sustainability, according to the 2020 Environmental Performance Index. Its global position is 19th, which is eight positions down compared to the 2016 study.

WEF’s The Travel & Tourism Competitiveness Report 2019 ranks New Zealand 24th in the dimension of environmental sustainability. The country scores very high for the low concentration of particulate matter in the air (5th), as well as for the sustainability of the development of its travel and tourism industry (1st).

What brings New Zealand’s environmental performance down considerably is the number of threatened species found in the country. Here, New Zealand occupies the second-to-last position among the 136 countries evaluated by WEF. The good news is that the country’s performance in this area has improved considerably during the last five years, now up by seven positions compared to 2013 results.

New Zealand ranks 38th among the 140 countries analyzed in the 2017 Happy Planet Index. Its strongest assets are life expectancy with an average of 81.4 years, and inequality, both positioned 12th. New Zealand also scores high in the dimension of general well-being (13th).

Nevertheless, the ecological footprint of the country tears down its ‘happiness’ performance, ranking New Zealand 119th due to the high consumption of resources and waste generated by its residents.

Contrary to New Zealand’s strong image as a haven of sustainable tourism, there are important issues of environmental sustainability that the country needs to pay attention to, in order to keep its reputation as a high quality, green destination.

How satisfied are New Zealanders with their life quality?

OECD’s Better Life index brings out that New Zealand is enjoying strong economic growth which is driven by booming tourism, high net immigration, solid construction activity and supportive monetary policies. The fiscal position is sound, with low public debt and a balanced budget. All this contributes to the country’s solid performance in the Better Life Index.

New Zealand ranks at the top in health status and above average in many areas, such as civic engagement, housing and social connections. Its performance is below average in income and wealth, work-life balance, and personal security. New Zealanders’ general life satisfaction (7.3/10) is higher than the OECD average of 6.5.

What is New Zealand’s contribution to global well-being?

The Good Country Index by Simon Anholt and Robert Govers ranks New Zealand 22nd in the latest edition of this study that analyses countries’ contribution to global well-being. It scores highest for its efforts in international peace and security (12th), and health and well-being (19th). New Zealand’s contribution to world order is also relatively strong (21st). In terms of prosperity, however, the country could be taking bigger steps to improve global economic equity.

How strong are New Zealand’s nation brand and reputation?

New Zealand’s performance in the 2017 Nation Brands Index is commendable. Despite being the 46th nation brand in terms of its value (199 USDbn), it ranks as the 7th strongest country brand in the world, with a rating of triple-A. The value of the brand showed an important 15% increase last year, which is a lot, compared to the global leader USA’s 2% growth – although not as impressive as China’s 44% increase in brand value.

Country RepTrak ranked New Zealand as the 4th most reputable country in 2020, which is one position up from the previous year. This year, New Zealand’s reputation was strongest in the fields of appealing environment (2nd) and effective government (7th). According to this study, the country’s reputation has been very stable and strong throughout the last five years, showing very little variations in its ranking.

Enjoyed our summary of global rankings and indices on New Zealand’s economic performance, its sustainability, attractiveness for digital nomads, brand strength and reputation? Thanks for sharing!

Share
Facebook
Twitter
Pinterest
WhatsApp
Previous articleAndrej Kóňa on Destination Slovakia, Nation Brands and Country Reputation
Next articleWhy One Size Fits All City Brands Are Doomed to Fail: And How to Do It Better
- Advertisement -