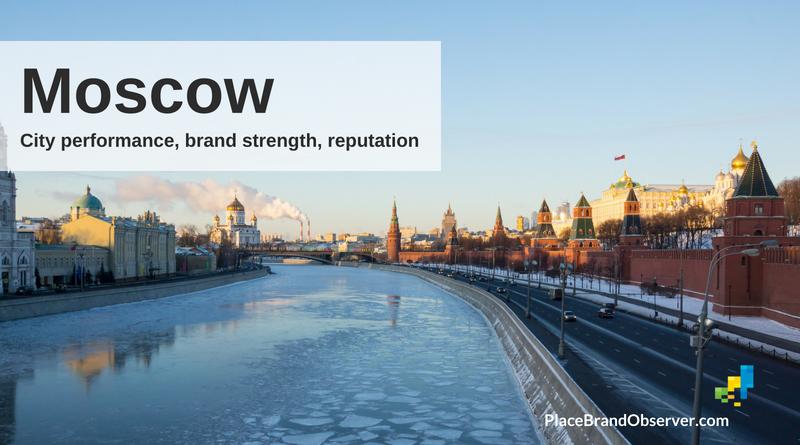 Moscow: how does the capital of Russia, one of the world’s geopolitical leaders, perform in studies of economic competitiveness? Is the twelve million city a global leader in terms of talent and innovation? How good is Moscow’s reputation abroad, and what are its best brand assets? Find the answers in this overview of Moscow’s performance, according to global rankings that measure city competitiveness.

Despite being an important cosmopolitan city and the capital of the world’s largest country, Moscow is not among the most reputable cities. The 2018 City RepTrak® study Moscow in the 56th position among the 56 cities analysed worldwide.

Ranking 32nd in the 2019 Global Power City Index, Russia’s capital is also positioned relatively low in terms of its global influence. In comparison, the big capitals of Europe – London (1st), Paris (4th) and Berlin (8th) — all rank much higher.

Moscow fails most strongly in the categories of environment (41st,) and economy (40th). On the other hand, it received a high score for accessibility (12th), showing its international connectedness.

According to the same study, Moscow is in the top ten for its cultural interaction (10th) as the city is famous for a number of museums, theaters, cultural events, and tourist attractions. At the same time, Moscow is least favored by managers, who rank it 37th on their list of preferred places for work and residence.

The performance of Moscow has seen a rather important decline during the ten years of this index. Its initial ranking in 2008 was 23rd , dropping to 32nd currently, followed by the lowest position (37th) in 2012.

Resonance Consultancy‘s 2020 World’s Best Cities Report, based on a combination of opinions from locals and visitors, shows a very different tendency regarding the popularity of Moscow.

In 2020, Moscow is ranked as the 5th best city among the 100 cities analyzed. Moscow is shown as the global leader in the Product category but its score has tumbled from 24 to a measly 143 under the People category signifying a steep decline in the country’s population diversity. Following the 2018 FIFA World Cup, Moscow’s score under the Place category has improved from 12 to 2, which is confirmed by the report’s Airport Connectivity ranking where the city stands 1st.

In terms of expensiveness, Moscow’s ranking has slipped from 17th in 2018 to the 27th position, according to the 2019 Mercer Cost of Living Survey, which looks at 200 goods and services that affect the cost of living.

Security, another important aspect of life quality, is studied in the Safe Cities Index (2019), where Moscow ranks 37th. This index is calculated taking into consideration four dimensions of safety: digital, infrastructural, health and personal security.

Another way of looking at place equity is through social, economic and environmental sustainability. The Arcadis Sustainable Cities Index ranks Moscow 58th in its 2018 study. The city scores 14th in the people sub-index, 87th in the planet sub-index and 53rd  for profit.

Innovation and global finance in Moscow

Moscow has improved 10 positions since 2018 and is now ranked 38th according to the Innovation Cities™ Index by 2thinknow for its potential as an innovation economy.

However, the 2019 Global Cities Index puts Moscow in a much more favorable position, ranking it 18th overall, with a special mention of its many museums and rich cultural experience. The city has a good outlook in the index, as it is ranked 22nd for its future potential to disrupt through innovation, largely thanks to the high number of university-sponsored incubators.

Finally, Moscow’s ranking in the latest Global Financial Centers Index 26 is 71st, seventeen positions higher than in the previous edition.

How attractive is Moscow for digital nomads?

According to Nomad List, Moscow performs average in terms of being suitable and attractive for digital nomads. Nevertheless, both Nomad List and the Digital Life Abroad report rank Russia’s internet speed highly, and free Wi-Fi is available in plenty of places in Moscow.

Perhaps no surprise, Russia in general ranks very low when it comes to unrestricted Internet access. Overall the country is ranked 25th in the aforementioned report, being representative for Moscow’s mediocre position in the Nomad List.

Despite being a list which is subject to frequent changes, it is interesting to see that in two particular categories Moscow is performing poorly; those being ‘peace’ and ‘LGBT friendly.’

Enjoyed our summary of global rankings and indices on Moscow’s economic performance, its sustainability, attractiveness for digital nomads, brand strength and reputation? Thanks for sharing!