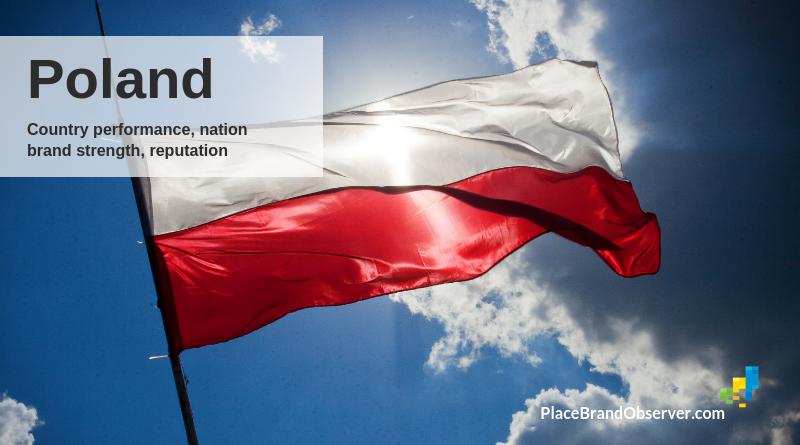 Poland: a good country for doing business? Is it easy to be an entrepreneur there? What about its political culture? Is Poland an international, open country? Answers to those questions and more in our summary of reports, studies and rankings on Poland’s national performance, country brand and reputation.

As per The Global Competitiveness Report, Poland is the 39th country in terms of business environment, dropping three positions since the last edition, but still better than its all-time lowest position in this report (41).

World Bank’s Ease of Doing Business study ranks Poland at 33rd position. This is a very low performance compared with the rest of the region. Also, the country shows an especially low performance in the categories of Starting a Business (121st), Paying Taxes (69th) and Protecting Minority Investors (57th). On the other hand, like all the members of the European Union, it is ranked 1st for Trade Across Borders.

The 2017 Corruption Perception Index by Transparency International ranks Poland 36th among 180 countries; a decrease compared to 2016 and 2015.

The Democracy Index by The Economist indicates that Poland’s democracy has been slowly deteriorating since 2006, only experiencing an increase in 2014. Poland is ranked 53rd in this index, same position as in the last report. The country shows good performance in areas such as Electoral Process and Pluralism, and Civil Liberties. However, it has a low performance in Political Culture, Functioning of Government and Political Participation.

As of 2018, Poland is the 39th most talented country, according to the Global Talent Competitiveness Index. This is a low performance when compared to other European Union countries; though comparable to other Eastern European nations. The country is placed 61st in the category of Attractiveness for Talent and 43rd for Talent Growth.

The Elcano Global Presence Index ranks Poland in the 31st position. The country performs well in soft areas such as Tourism (17th), Information (18th) and also across the economic indicators covered by this study: Manufacturing (18th) and Services (24th). Poland ranks 23rd for GDP, which is a comparatively high position.

The Global Soft Power Index 2020 ranks Poland 35th, ahead of South Africa (36th) and Mexico (37th). The Index states that Poland is “arguably one of Europe’s biggest economic success stories”. Recent years’ have supported its efforts in domestic demand, increased foreign direct investment, and productivity but given the current climate and political situation, Poland’s supported efforts and relationships may falter within the EU and internationally.

Since 2015, Poland has improved by seven positions in the Digital Country Index which measures global interest in countries by means of online search terms and volume. This means that the country is ranked 27th globally and 13th in Europe. The top performing areas are Exports (21th), Talent (24th) and Prominence (28th).

Poland did not get a good score in the latest Environmental Performance Index, which puts it at 50th position. Poland received particularly bad scores in areas such as Environmental Health (104th), Air Quality (144th), Forest (92nd) and Fisheries (119th). However, the country is very well ranked in the areas of Biodiversity and Habitat (6th) and Ecosystem Vitality (18th).

According to the Travel & Tourism Competitiveness Report, Poland holds the 46th position globally. The country is a top performer in areas such as Safety and Security, Health and Hygiene, International Openness and Price Competitiveness. Less well developed, according to the study, are Air Transport Infrastructure and Tourist Services Infrastructure.

The OECD Better Life Index shows that Poland performs very well in some areas, especially Health, Safety and Education. Areas related to Income, Housing and Life Satisfaction show the weakest performance. Also, the country performs average for Work-Life Balance and Jobs. Another point in favor for Poland is the strong confidence among citizens, according to the study.

Poland is ranked 42th in the World Happiness Report, which is a low performance when compared to the rest of the region. For instance, immigrants surveyed as part of the study referred to Poland as a country which does not easily make them feel welcome.

Poland is ranked 30th in The Good Country Index. Despite the average position, it has a good performance in some aspects of the Index: 23rd in Science & Technology, 21st in Culture, and 24th in World Order. On the other side, the country gets bad marks for International Peace & Security (107th) and Health & Wellbeing (79th).

The Global Peace Index finds Poland in the 32nd position worldwide, and 22nd in Europe. The study explains this through the new divisive government in Poland, considered the main reason for the nation’s deterioration in the index.

Poland is ranked 23rd in the Nation Brand Finance Index: a growth of 14% compared to 2017.

Enjoyed our summary of global rankings and indices on Poland’s economic performance, its sustainability, attractiveness for digital nomads, brand strength and reputation? Thanks for sharing!