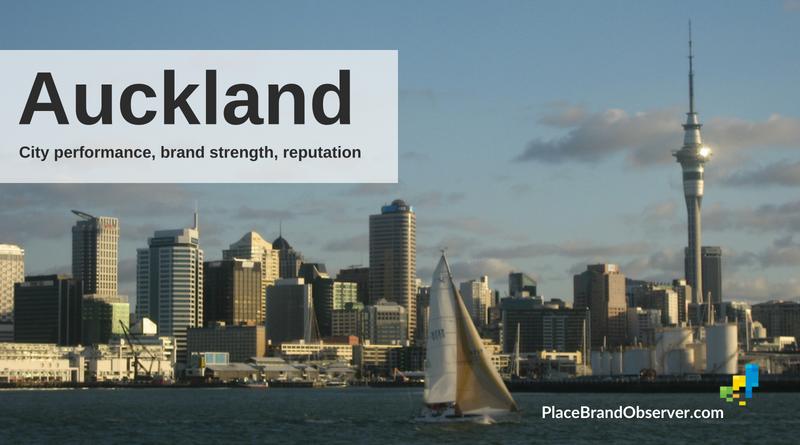 Auckland is New Zealand’s largest city and the country’s financial and economic center. Located between two harbours, there are beaches, hiking trails, and islands within a short distance of this popular destination in Oceania. But how is Auckland performing in terms of reputation and influence, business attractiveness and sustainability?

Ranked 17th on the Ipsos Top Cities Index (2017), Auckland’s comparatively high position is mostly due to its popularity as a place to live in, ahead of its appeal as a place to visit, or work. The ranking also offers details on the evaluations given by different generations, and Auckland scores 9th both for the Baby Boomers (born between 1945-65) and Generation X (1966-1979).

In Resonance Consultancy’s 2020 World’s Best Cities report, Auckland ranked 98th overall among 100 cities. The city scores 89 in Programming and its performance is considerably worse in the categories Prosperity (125), Promotion (118), Place (96), and Product (94).

On the other hand, comparatively high incomes and purchasing power seem to compensate for this. The UBS Prices and Earnings 2018 Index ranks Auckland 13th out of 77 cities for Price, all in all still among the more affordable cities worldwide.

Ranked 35th on the World’s Healthiest Cities Index, Auckland is one of only two New Zealand cities that found their place in the ranking. Its position is mainly thanks to high scores for green spaces, life expectancy, as well as air and water quality.

Auckland is an expensive city to live in, including for digital nomads. This is emphasized by both the Nomad List and the Digital Nomad Index. Both the positions for the average rental cost of a one-bedroom apartment and for the cost of a beer are ranked in the second half of the scoreboard of the aforementioned index.

In addition, the list considers the cold weather a relevant factor whether or not to live in Auckland. Similarly, both the list and the index regard the startup score as low.

Overall, the city is ranked 11th.  Interestingly, whereas the index and list praise the high-speed Internet access in Auckland, New Zealand’s high-speed home Internet access is the only category the country scores badly in (35th) according to The Digital Life Abroad report. That said, the report praises the digital life in New Zealand and even ranks it 5th out of 68 countries.

Auckland ranks 110th in the Global 2019 Innovation Cities™ Index, a fall in 14 places since the last year.

Enjoyed our summary of global rankings and indices on Auckland’s economic performance, its sustainability, attractiveness for digital nomads, brand strength and reputation? Thanks for sharing!