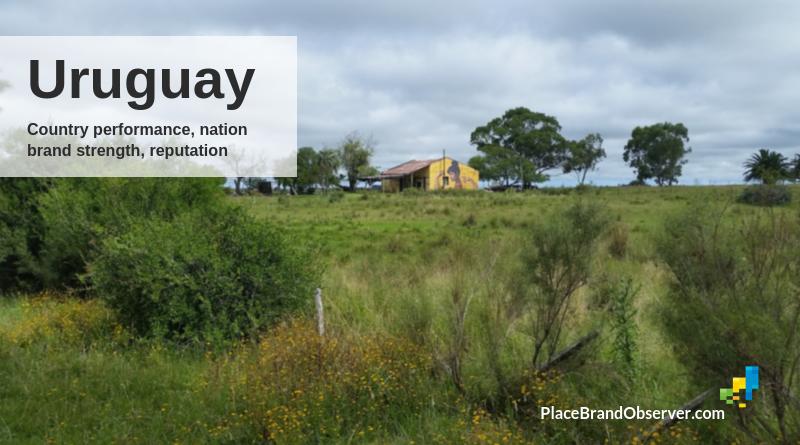 Uruguay: what do international rankings and reports say about Uruguay’s economic performance, its attractiveness for investors, visitors, or people looking for a new home? How strong is its country brand and reputation as democratic nation?

Find answers to those questions and more in this overview of studies measuring country performance, brand strength and reputation.

Uruguay is ranked 52nd in the 2018 edition of The Global Competitiveness Index. This shows a performance that is above many of the Latin American economies measured by the study; despite the drop of three positions since the last edition.

World Bank’s Ease of Doing Business Index ranks Uruguay in the 95th position. Some specific areas of the index show that Uruguay is creating a favorable environment for starting a business (65th position) but has some issues when it comes to construction permits (155th), registering property (115th), protecting minority investors (132nd) and paying taxes (101st position).

Tata Corporation, in its annual benchmark study about global talent competitiveness, in its last edition placed Uruguay in the 44th position, based on a very good performance in attracting talent (28th), retaining talent (31st), as well as talent growth (39th). However, the country does not perform equally well in areas such as VT Skills (75th) or GK Skills (70th).

Transparency International’s Corruption Perception Index in its 2017 edition placed Uruguay in the 23rd place among 180 countries: the best-ranked country in Latin America, followed by Chile.

As per the Democracy Index 2018 edition, Uruguay is ranked 15th out of 167 countries: first among Latin American countries. The country ranks very well in all of the areas measured by the Economist Intelligence Unit (which publishes the index), but it does especially well in areas like electoral process, pluralism and civil liberties.

Uruguay also shows a satisfactory performance with regard to functioning of government, political participation and political culture.

The Real Instituto Elcano’s Index on Global Presence measures three main areas of a country’s international presence: economic, military and soft power. Uruguay is placed at 80th position overall in the last edition of the index (2018). In terms of economic presence, the country is ranked at 93rd , 51st for military presence; and 84th position for soft power.

The Digital Country Index, which measures digital searches in the web, places Uruguay in 73rd position globally. This means a variation of -5 positions since the last edition. Its performance in the areas covered by the study: exports (83rd position), investments (79th position), tourism (85th position) and prominence (38th position). Uruguay’s overall position within Latin America is 16th.

The Environmental Performance Index (EPI), in its annual study on how countries perform in terms of environmental preservation positioned Uruguay 47th in the last edition. The country is ranked 30th in Environmental Health, 37th for Air Quality, 30th for Water and Sanitation, 74th for Heavy Metals, 101st for Ecosystem Vitality, 136th for Biodiversity and Habitat, 136th for Forests, and 48th for Fisheries.

The country has a very good 6th position for Climate and Energy, mainly because of its strong investments in renewable energy. Also highly regarded, the environmental impact of its agriculture (ranked 8th). Less impressive are its scores for Air Pollution (180th) and Water Resources (105th).

The World Economic Forum, in the latest (2017) edition of its biannual Travel & Tourism Competitiveness Index, placed Uruguay in the 77th position. This represents a drop of four positions compared to the last edition (2015). Among the many factors included in the index, Uruguay performs best in Health and Hygiene, Safety & Security and Prioritization of T&T.

The country, according to the ranking, is not a good performer in vital areas such as Air Transport Infrastructure, Natural Resources and Cultural Resources & Business Travel.

The World Happiness Report places Uruguay in the 31st position, a performance comparable with the rest of the region. Uruguay as destination is highly sought-after by some countries in the region, such as Brazil and Venezuela. And immigrants reported that they generally feel welcome in the country. Less than 15 per cent of the inhabitants of Uruguay reported plans to emigrate to other countries.

According to the Happy Planet Index, Uruguay comes 14th (out of 140 countries included in the index). It performs well in Life Expectancy (38th position) and Well-being (29th position). However, it does not have a good performance in Ecological Footprint (78th position) and Inequality (52nd position).

The Good Country Index – measuring the contribution of countries to the global community – ranks Uruguay 49th overall. As per this index, the country is not a good performer across most of the factors taken into consideration, such as: Science & Technology (125th position), Culture (64th position), World Order (33rd position), Prosperity and Equality (76th position) and Health and Well-being (90th position). The exception would be International Peace & Security (6th position) and Planet & Climate (15th position).

The 2018 edition of the Global Peace Index ranks Uruguay 37th. This is a drop of two positions from the previous edition. The score also means that Uruguay is in the second place among South American countries. With no ongoing international or domestic conflicts at the moment, it is among the most peaceful countries in the world.

The Nation Brands Report 2018, created by Brand Finance, evaluates Uruguay’s country brand performance on an annual basis. The report shows that Uruguay dropped 5 positions in the rank since the previous edition. However, the value of the country’s nation brand increased by 2 per cent in the 2017-2018 period. The report gave Uruguay a AA- rating in this latest edition, which means a slight deterioration from the last rating in 2017 (AA).

Want to know more about Uruguay and what it does to attract investors, talent, visitors? Find in-depth interviews with some of the country’s leading film makers, investors and entrepreneurs in our Uruguay Country Report.

Enjoyed our summary of global rankings and indices on Uruguay’s economic performance, its sustainability, attractiveness for digital nomads, brand strength and reputation? Thanks for sharing!