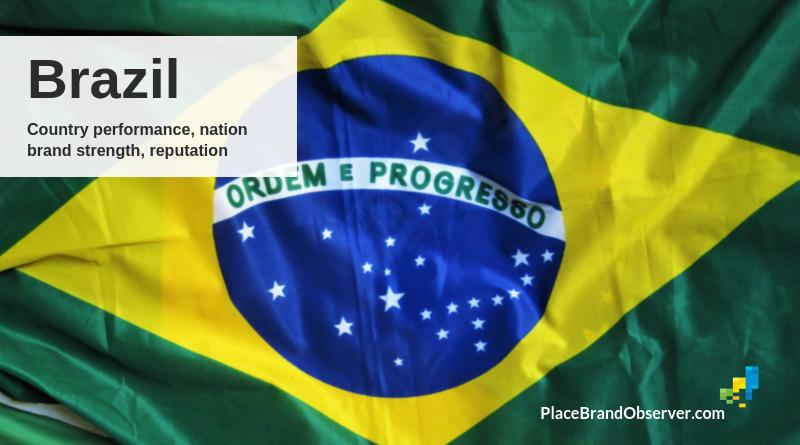 Brazil: is it a good moment to invest in Brazil? How easy is it to do business there? Is Brazil a good destination to visit? Is it a “green” country? Answers to those and related questions in our summary of international indices, studies and rankings on Brazil’s country performance, nation brand strength and reputation.

In terms of national competitiveness regarding productivity, The Global Competitiveness Report ranks Brazil 80th out of 137 countries – a poor performance compared to other countries in the region.

The Ease of Doing Business study ranks Brazil 109th. Despite this rather poor position, Brazil is experiencing improvements in some areas, such as Starting a Business (+15), Getting Credit (+5) and Trading Across Borders (+6.85). However, the country’s performance deteriorated in the category of Registering Property and other areas, such as Paying Taxes and Protecting Minority Investors.

In The Travel & Tourism Competitiveness Report, Brazil is ranked 27th, one position up compared to the study’s last edition. The country ranks very low in the areas of Business Environment, Human Resources & Labor Market, but has a good performance in Health and Hygiene.

Transparency International, in its 2017 Corruption Perceptions Index, puts Brazil 96th – a score which is below that of previous reports.

The Democracy Index by The Economist places Brazil among the “Flawed” Democracies, showing a deterioration in the last few years, despite a general increase during the last decade. Brazil is placed in the 49th position of the index, with a good performance in Electoral Process and Pluralism, and Civil Liberties. Its performance is weaker in areas such as Functioning of Government, Political Culture and Political Participation, according to this study.

The 2018 Global Talent Competitiveness Index ranks Brazil 73rd worldwide and 9th in Latin and Central America, and the Caribbean. The only area in which Brazil is a top performer in this ranking is Talent Growth, with good performance also in Enabling Talent, Retaining Talent and VT Skills.

As per the 2017 Global Presence Index, developed by Elcano Institute in Spain, Brazil is the 19th country in the world with most presence. It is a top performer in economic and military areas, but has also a strong presence in “soft” areas, such as tourism and sports, for which it is ranked 10th in the world. Brazil is also strong with regards to military equipment – ranking 12th. In the economic area, Brazil ranks 7th for primary goods.

The 2020 edition of the Global Soft Power Index ranks Brazil 29th, leading the way for Latin America. Brazil secures an impressive 13th position in familiarity. With responses from over 55.000 individuals from more than 60 countries and territories, Brand Finance‘s survey determines who perceives Brazil as a great place to visit, results being Southern Africa, United States, Mexico, Portugal, and Japan respectively. Brazil’s current political situation and crisis management will be telling for its next years’ ranking in terms of soft power.

Brazil in the web

Brazil is ranked 14th in the Digital Country Index, dropping one position compared to the study’s previous edition. The country is a top performer for online searches related to Sports (11th) and Investment (12th).

According to the Environmental Performance Index, Brazil is ranked 69th, which means an increase since the last report. The country scores very well in some areas (Fisheries 6th, Agriculture 16th), but in other areas lags behind, such as Ecosystem Vitality (68th), Water and Sanitation (102nd), Climate and Energy (157th) and Air Pollution (129th).

The Better Life Index by the OECD shows that Brazil ranks well in the areas of Life Satisfaction, Health and Work-Life Balance. On the other side, it ranks very low for Safety (with a score of 0.1/10), Education, Income and Housing.

Brazil is ranked 28th in the 2018 World Happiness Report, which stresses the country’s appeal as one of the top destinations for immigrants from other Latin American countries.

According to the Happy Planet Index, Brazil is the 23rd best-performing country (out of 140). It is ranked 67th for Life Expectancy, 23rd for Wellbeing, 81st for Ecological Footprint; and 73rd for Inequality. Despite the overall good performance, the study shows some weaknesses and deficiencies in crucial areas.

As per the Good Country Index, Brazil’s performance is very low, especially if we compare it to its global presence. The ranking places Brazil in the 80th position, out of 159 countries. It has a low performance in most of the areas covered by the Index: Science & Technology (109th); Culture (119th); International Peace & Security (61st); World Order (50th); Planet & Climate (53rd); Prosperity & Equality (162nd); and Health & Wellbeing (40th).

Enjoyed our summary of global rankings and indices on Brazil’s economic performance, its sustainability, attractiveness for digital nomads, brand strength and reputation? Thanks for sharing!