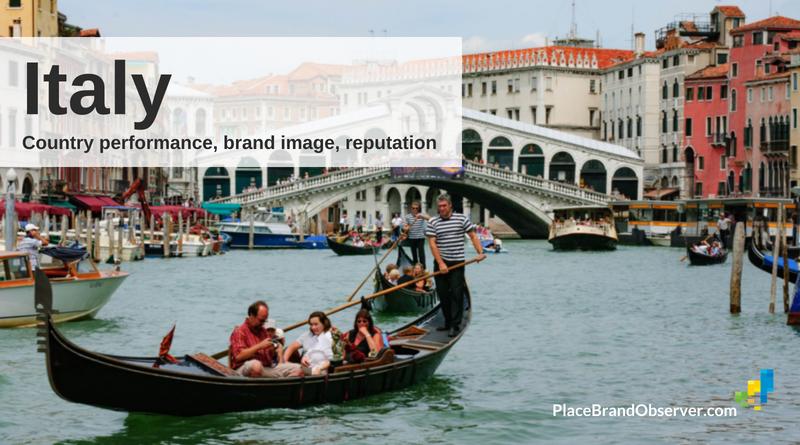 Italy: how does one of the world’s most popular tourist destinations perform in global rankings that measure soft power, talent attraction potential and environmental sustainability? How does Italy’s political and economic instability affect its ranking in studies that measure economic competitiveness and public diplomacy? Answers in this summary of global reports on Italy’s country performance, brand image and reputation.

How does Italy perform in indices that measure economic competitiveness and ease of doing business?

While Italy stands out for its excellent conditions of trading across borders (1st), its overall performance in the 2017 Ease of Doing Business study is rather poor, ranking 46th.  Apart from trading, none of the pillars of Italy’s economy made it into the global top-20. While registering property (23rd) and resolving insolvency (24th) do fairly well, getting credit (108th) and paying taxes (112th) prove to be troublesome procedures of doing business in Italy, according to this study which is conducted by the World Bank.

Italy’s ranking in 2017 was one position lower than the previous year; however, the country’s performance has improved significantly ever since 2013, when it ranked 73rd.

Italy’s ranking in the Global Competitiveness Index is similar: in the 2017-18 report it was positioned 43rd. Here, Italy’s strongest pillar is its market size (12th), followed by business sophistication and health, and primary education (both 25th). Italy’s weakest pillars in this study are the development of its financial market (126th) and the efficiency of its labor market (116th).

Italy’s ranking in this report has also improved over the last years. Its current performance is one position higher than in 2016 and six positions better than in the 2013 study, where it ranked 46th.

What is the perception of corruption in Italy and how competitive is the country in terms of attracting and retaining talent?

Transparency International’s 2017 study on the Perception of Corruption ranked Italy 54th among the 180 countries included in the survey. With this, it was positioned below countries like Namibia (53rd), Rwanda (48th) or Botswana (34th). In comparison, Italy’s neighbors Austria (16th) and France (23rd) both do significantly better in terms of transparency.

Italy’s ranking in the 2017 Global Talent Competitiveness Index is 36th. The study brings out that Italy has the lowest overall performance, ranking lower than several Eastern European countries.

Although Italy has excellent clusters, those are affected by the regulatory landscape (56th) and, above all, the business and labour landscape (103rd). Italy also has ample room for improvement in terms of external openness, especially attracting talent from abroad.

How much soft power does Italy have?

Despite Italy’s relatively low ranking in indices of economic performance, the country has rather strong cultural influence on other states. Italy ranks 13th in the 2017 Soft Power Report. This is one position above its neighbor Austria (14th) and also higher than Spain (15th) and Greece (23rd). While the Global Soft Power Index 2020 by Brand Finance ranks Italy a closely positioned 11th.

Popularity of Italy in online searches

How strong is digital demand for Italy?

Italy’s performance in the Digital Country Index is also strong – it ranks 10th in the 2017 edition, improving its performance by two positions compared to 2015.

Unsurprisingly, being one of the most popular holiday destinations in the world, the country ranks highest in the dimension of tourism (2nd). Exports (8th) and prominence (10th) also do well, while talent (11th) and investment (15th) fail to make it into the top ten of countries most sought-after, according to online search volume.

How does Italy perform in reports measuring environmental sustainability?

Italy has shown a significant improvement in the Environmental Performance Index over the past two years. Its 2016 ranking was 29th – thirteen positions lower than in 2018 (16th).

The country’s performance in the section of environmental sustainability in WEF’s Travel & Tourism Competitiveness Index 2017 is much lower though, at 37th. Here, the country’s best performing environmental pillars are the ratification of environmental treaties (20th) and wastewater treatment (21st). At the lower end of the index is Italy’s particulate matter concentration (108th). Also, probably due to the high number of foreign visitors, the sustainability of Italy’s travel and tourism industry (106th) also ranks low.

Is Italy a good place to live, according to reports on subjective happiness and wellbeing?

In OECD’s 2017 Better Life Index, Italy ranks above average for income and wealth, work-life balance, social connections and health status. However, it shows below average performance in civic engagement, housing, subjective well-being, environmental quality, jobs and earnings, personal security, and education and skills. Adding to this, despite the often envied Mediterranean lifestyle, Italians seem to be less satisfied with their lives (5.9 on a scale from 0 to 10) than the OECD average (6.5).

Italy achieves a Happy Planet Index score of 28.1 and ranks 60th of all the countries analysed in the 2016 study. It ranks very high –3rd— for life expectancy (82.7 years). However, its performance in other pillars is much less outstanding. Italy stands 28th for inequality, 51st for wellbeing and is left at the bottom end of the ranking (106th out of 140) for its ecological footprint.

What is Italy’s contribution to global well-being?

Italy’s ranking in the latest Good Country index (which analyses countries’ contribution to global well-being) is 16th. Its biggest contribution is in planet and climate ( 7th) and world order (14th). Health and wellbeing rank 24th, the pillar of culture, 26th. Prosperity and equality rank 36th, science and technology 41st and the country’s efforts of improving global peace and security are at 55th position.

The Global Peace Index ranks Italy 38th in its 2018 study. This is one position up, compared to the previous edition. In terms of the economic cost of violence (% of GDP), Italy positions 124th, which indicates that it invests proportionally less in conflict prevention and resolution, compared to other European states like France (110th), Greece (105th) or Estonia (89th).

Reputation and performance of Italy as nation brand

How does Italy perform in studies that analyse nation brand value and international reputation?

Italy ranked as the 9th most valuable nation brand in the 2017 Nation Brands index. Over the last year, the country experienced an impressive 34% growth in its nation brand value. However, it only allowed it to maintain the same position in the ranking as in 2016. The study brings out thatj, similarly to other former ‘PIGS’ countries, Italy’s growth in nation brand value is due to reforms which allowed to country to regain the confidence of analysts and investors.

The Country RepTrak study positions Italy a little lower in its assessment of country reputation. In 2017, Italy ranked 14th, which is two positions down from the 2016 results. The internal reputation of Italy is two positions lower –16th— making it one of the most self-critical countries, together with Brazil, South Africa and Spain. That said, Italy scores very well for perceived attractiveness of its environment, for which the study puts it in 5th spot.

Enjoyed our summary of global rankings and indices on Italy’s economic performance, its sustainability, attractiveness for digital nomads, brand strength and reputation? Thanks for sharing!