What Is It Like to Be a Digital Nomad or E-Ployee? 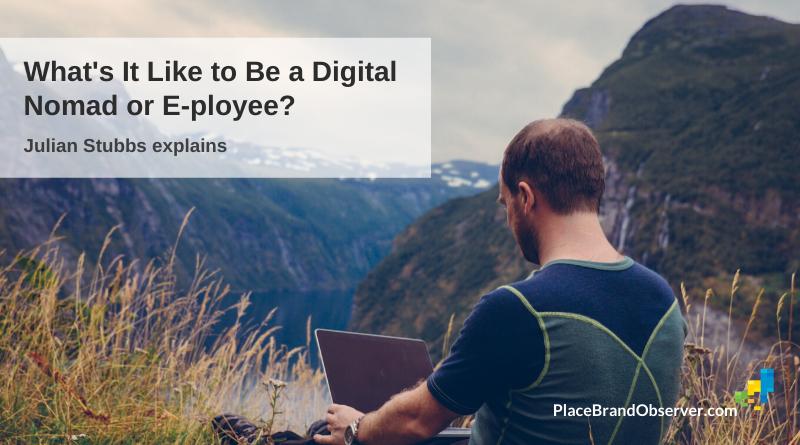 Julian Stubbshttps://www.upthereeverywhere.com
Globetrotter, e-ployee and Founder of UP THERE, EVERYWHERE

Places, where we live, how we work – it’s all changing very fast now. And talent mobility is a big part of it. This is a trend which those overseeing talent attraction for communities – cities or regions – should be well aware of, and prepared for.

Having written in my previous blog about why I chose Stockholm as my place and what I like about it (considering that as e-ployee I could live anywhere in the world), let me briefly introduce you to how, at UP THERE EVERYWHERE we make digital nomadism possible, as company, and how being an e-ployee works.

We encourage our members to work wherever they work best. All prospective UP members are first interviewed to see if there is a mutual fit and if they have the right skill sets. Then, all being good, we sign a mutually binding contract. Again, our model really hits the spot for members. We wrote a book about E-ployment back in 2012.

You may wonder, what’s the difference between digital nomads (DN) and E-ployees?

Digital nomads tend to be younger, certainly more nomadic, and generally jobbing workers who move from project to project.

E-ployees are often more mature (OK – older), looking for more stable work, with larger clients, and want to work from a fixed geographic location (of their choosing), because many members have families etc. They are also people who want the comfort of working with a consistent group of colleagues just like them, in distributed teams and often globally.

As an E-Ployee myself I tend to work from an UP Creative Space one or two days a week, to meet clients or other UP team members. We have UP Creative Spaces in Stockholm, Uppsala, Hamburg, Amsterdam, London, Guildford and New York, and we’re now looking for a good space somewhere on the west coast of the US, probably Palo Alto or San Francisco area.

So for me it’s the perfect combination of being able to use an office type facility when I want, but still have the freedom to work from home, or wherever I am on the road traveling.

We had a saying in the early days of UP. Why waste time going to an office. Work where you work best. We think that’s a pretty good idea.

We also give people freedom to work when they want to work, as we all have different body clocks and personal situations to manage.

I’m an early bird, so up early walk the dog and then get into some work. I typically clock off for a short working lunch, then a cup of tea around 4PM (well, I am –  or was British …until Brexit), then I’ll clock back on and work during the evening. I’ll probably average 50 – 60 hours a week, but because of the way we work and the environment, it’s certainly not like a typical job or typical work. The point is: it’s really up to you how much you want to work.

I often find I need a creative environment to get the juices flowing, so I’ll head to a museum, exhibition, interesting bit of architecture or just a café and generally this works best for me. I’m also lucky because I work just as well from an airport, on a train or in a hotel as I do anywhere. And the great thing about Stockholm is that everywhere is online, with great wifi and great cafes. Perfect.

How I benefit from working as e-ployee

So here’s a really big point about the benefit of working this way. I am far more productive than most people. I don’t need to waste time sitting in a car or on public transport just because I have to go to an office. I once calculated, before we started UP, that I used to spend over 14 days a year simply commuting to and from an office. I’d much sooner spend that 14 days on holiday. I’d also sooner save all that fuel and CO2 emissions.

For places, cities and municipalities, this is a real opportunity. There is huge potential in attracting this new creative class of digital nomads, or E-ployees. As a group, we tend to be pretty well paid and that makes us great contributors to a local economy. This is a major shift. The creative class bring wealth with them.

But what do these creative individuals look for? We’ll explore that more in a future blog.

We have received numerous requests to talk more about E-ployment, and so in 2020 we will be holding two special E-ployment events.

The first will be a breakfast meeting which will be held on Friday March 20th at a venue in Stockholm. This will kick off at 7.30 in the morning and run for a total of 2 hours. Click here to go on the information list.

The second event will be held later in the year, during the autumn, and will be a day and a half long conference focusing on the topic of E-ployment and again this will take place in Stockholm. More news on this in the near future.

E-PLOYMENT; LIVING & WORKING IN THE CLOUD. The book on how E-ployment was developed as a new way of working.

This guest post on e-ployment is part of a series of articles by Julian, the founder and owner of digital communications agency UP THERE EVERYWHERE, linked to digital nomadism and changes in how we use and what we expect from places, such as cities. Find previous posts by Julian here.

You have something interesting to share with our readers? Get in touch!