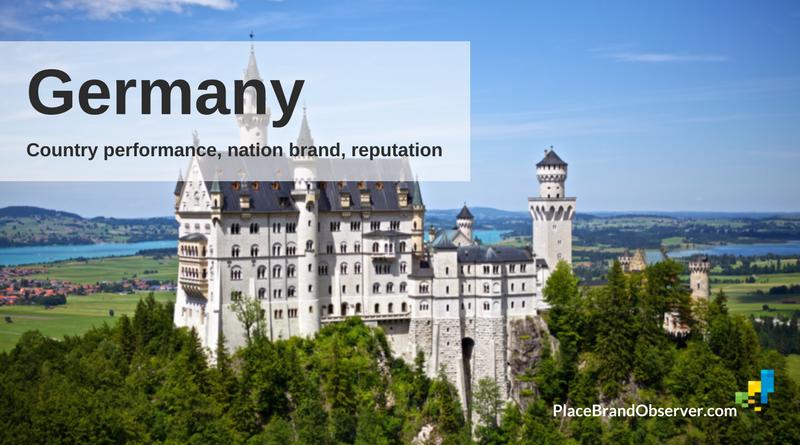 Germany: How does Europe’s political leader perform according to indices of doing business, talent attraction and environmental sustainability? What are the pros and cons of living in EU’s most populated country? How strong is Germany’s economy compared to other global leaders? Read about the country’s reputation and competitiveness, and the performance of Germany as nation brand.

Is Germany an attractive place for starting a new business?

World Bank’s 2018 Ease of Doing Business index ranks Germany as the 20th best country for doing business. It does best in resolving insolvency (4th) and helping get electricity (5th), but there are some aspects of entrepreneurship in Germany that are much less appreciated. For example, Germany ranks 113th in the dimension that evaluates the ease of starting a new business. One reason for this might be the comparatively high amount of capital required for starting a business (GmbH), and the bureaucracy involved. On the other hand, the country has shown impressive stability throughout the last decade, with the same spot in the ranking this year as it had in 2008.

WEF’s Global Competitiveness Index gives Germany a much more favorable position — 5th in its 2017-2018 edition. Germany’s strongest pillars are the market size, business sophistication and innovation (all ranked 5th). The country’s general performance in this index is very strong and the only dimension not in the top 20 is institutions (21st). Compared to 2008, Germany’s performance in this ranking has improved by two positions.

Is Germany an attractive place for talented workers?

Germany ranks 19th in the 2018 Global Talent Competitiveness Index. In the European region, the country’s position is 13th. This is relatively low, considering Germany’s strong and stable economy.

The study brings out that Germany is one of the leaders in vo­cational and technical skills (4th), while its global knowledge skills are evaluated much lower (30th).

The soft power of Germany

How much influence does Germany’s culture have in the world?

The Global Soft Power Index 2020 ranks Germany second, only behind the US. Germany’s soft power position is greatly influenced by its well-respected leadership. While Germany’s familiarity and influence both fall behind that of US respectively, Germany has the North American country beat in terms of reputation.

Germany performs well in the 2017 Soft Power index: it ranks 4th in the list which is topped by France, the UK and the US. Despite the country’s good position, its ranking has declined slightly two years in a row. The study suggests terror attacks, the influx of migrants and the emergence of the nationalistic, far-right political party AfD as possible causes for the country’s falling influence.

How big is Germany’s contribution to global well-being?

Germany also ranks high in the Good Country index, considered among the top 5 countries that contribute most to global well-being. Notably, Germany’s ranking in the first edition of this study was 13th, jumping onto position six in the following version, and finally assuring its 5th position in the latest study.

According to the Good Country index, Germany contributes most to the aspect of world order (2nd) and to health and well-being (7th). The country’s impact on achieving greater levels of international peace and security is evaluated considerably lower (37th).

How popular is Germany in online searches?

Germany’s strongest pillar is prominence, where it ranks 3rd; exports, investment and talent all rank 5th, while tourism is slightly behind, at 7th. The country’s ranking has been stable and hasn’t shown any noteworthy variation since 2015.

What do the indices say about Germany’s environmental friendliness?

The Environmental Performance Index ranks Germany 13th in its 2018 study. This is substantially higher than in 2016, when it was positioned 30th.

WEF’s Travel and Tourism Competitiveness report ranks Germany’s environmental sustainability as the 7th best among 136 countries. This is three positions down from its results in 2013. According to this report, Germany performs especially well in fulfilling the environmental treaty ratification (1st) and in treating its wastewater (5th). The high concentration of exhaust particles in the air, however, leaves Germany at the back end of the list, ranking 111th.

The Happy Planet Index gives Germany a less favoring position, ranking it 49th for its contribution to achieving “long, happy, sustainable lives”.  While Germany makes it to the top 20 in the dimension of inequality (13th) and life expectancy (19th), the country’s big ecological footprint (114th) negatively affects the overall ranking of Germany in this index.

Are Germans satisfied with their quality of life?

OECD’s Better Life Index sees Germany above the OECD average in many aspects linked to quality of life, such as education and skills, environmental quality, housing, personal security and perceived, subjective well-being. Only in the dimension of health status is Germany’s performance evaluated somewhat under the average of the 35 OECD countries included in the research.

All in all, the Germans are generally more satisfied with their lives than the OECD average.

How strong and valuable is Germany’s nation brand?

According to Brand Finance’s 2019 Nation Brands index, Germany is the third most valuable nation brand. Similarly, the Anholt-Gfk Nation Brands Index ranked Germany as the strongest nation brand in 2017. This came in the wake of a substantial drop in the perception of the USA, which went from number one in 2016 to sixth in the 2017 study.

In the 2017 Country RepTrak index Germany ranks 16th, which is 2 positions up from 2016. The country received especially high marks (4th) for its advanced economy. Also, its self-perception (or internal reputation) is the third highest among the countries surveyed, showing that Germans value their own country very highly.

Enjoyed our summary of global rankings and indices on Germany’s economic performance, its sustainability, attractiveness for digital nomads, brand strength and reputation? Thanks for sharing!