Is Country Branding A Waste of Money? 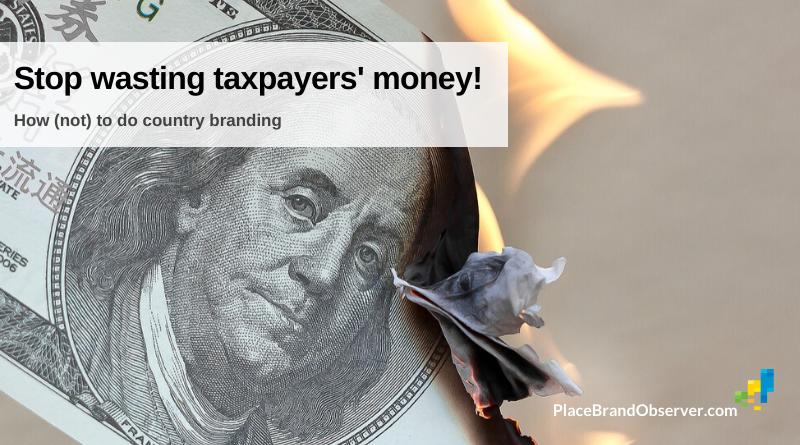 Country branding – well, place branding in general – tends to be expensive, especially when approached as an advertising campaign. Which by itself is one of the reasons why many place branding projects fail. So can we justify it?

Having advised many places on their branding and reputation management, Robert Govers in a recent opinion piece urged communication leaders and representatives of countries to stop wasting taxpayers’ money. We caught up with Robert to find out what this was all about, and to learn a new thing or two about the do’s and don’ts when engaging with country branding.

Robert, why do you think campaigns are a waste of taxpayers’ money when dealing with country branding?

First: With online and digital television, pop-up blockers and other tools it is becoming easier and easier for audiences to limit their exposure to broadcast advertising anyway. In addition, the global networks on which these commercials are usually aired are particularly popular among travellers who hardly need to be convinced of the richness of other countries, because they are probably more aware and better informed than most other audiences already.

So, I would question whether the right people are exposed to such campaigns, if the idea is to fight international ignorance about places.

Second: How likely is it that people will be paying attention? Most viewers or listeners will question the relevance of a random message about the wonders of some other country somewhere else on the planet.

Documentaries, travel shows, or targeted tourism or investment promotion commercials are legitimate because they are relevant to a (self-selected) audience that is in the market for what is on offer. But a random commercial bragging about a long list of achievements, attractions and attributes of some other place and people is hardly relevant to a relatively random audience.

What is more, many campaigns are very similar in content, as countries feel that they have to push the idea that they are also serious players in the global system. Lots of countries are projecting ideas of openness, diversity, dynamism, innovation and creativity.

Of course, the paradox is that globalisation has resulted in a level playing field in many of these areas, which is precisely the reason why countries need to become more imaginative in order to stand out. Instead, what they do is copy and paste the same message as many other countries. Why would anybody still pay attention?

Third: Comprehension can also be a barrier, as what is communicated is often at odds with the clichés and stereotypical images that ignorant foreign publics have in mind. Even if country image campaigns are not ignored, they are barely understood as they contradict existing beliefs. In other words, they do not resonate with the audience.

The Northern Belgian Dutch-speaking region of Flanders, known for its medieval cobbled streets and abbey beer; the Canadian province of Nova Scotia which is famous for its whales, lobster, tides and shipwrecks; or Kazakhstan, known for its steppe, nomads and horses; all have been relatively unsuccessful in the past with their strategies to position themselves globally as modern, dynamic and diverse. The problem is that the new claims almost completely contradict existing beliefs among most audiences that have had no prior interaction with the countries concerned.

By the way, what I am criticising here are the paid mass media campaigns that try to convince large international audiences what wonderful countries are “out there” and that the clichés and ignorance are inappropriate. The standard content of such commercials usually consists of aerial shots of landscape and transport or logistics infrastructure, some well-known tourist attractions, men and women in white coats with test tubes in a lab, an operational factory, some art and heritage, a business meeting or conference, students, tourists downtown or on the beach, and beautiful nature and nightlife. In other words, the intention is to show all the wonderful stuff most countries have to offer, while the narration lists all the brilliant things the country has accomplished.

The question is whether this has any effect, taking into account the above considerations. I am not referring here to tourism or investment promotion campaigns that aim at selling a specific product to a target market, which is legitimate.

To your mind, why are we still seeing advertising campaigns executed under the impression that those could change perceptions of a country internationally?

In my consultancy work I have been confronted with various reasons:

Needless to say, a lot of this is quite cynical when the real agenda is not really to solve a place image problem, but something different entirely.

Why bother about country branding or reputation management in the first place? What’s the point?

Would you rather let someone else (Hollywood, social media, foreign news agencies, foreign regimes) determine your international standing? Reputational risks and reputational security are a big deal in the world that we live in today, which was also the focus of Nick Cull’s keynote at the recent International Place Branding Conference in Greece.

How can country branding and public diplomacy teams do better, in terms of raising awareness and changing people’s perceptions?

I usually argue that countries should stop wasting taxpayers’ money to push messages down the throats of an unwilling international audience. Advertising or public relations are really not the way to build country reputation.

While in the commercial world advertising might have a significant impact on consumer perceptions of goods, services and corporations and has a role to play in tourism, export or investment promotion, it plays a very limited role in the way that people build a mental map of “foreign” countries.

In that context, personal experience, word of mouth – and more importantly nowadays, of course, social media – as well as mainstream news media, play a much bigger role.

So, I argue that the role of paid media in country reputation management is limited, which doesn’t mean that communication is irrelevant. Quite the contrary:

As earned media becomes more important, we now live in the age of what I would refer to as “action communication”, in the sense that reputations are built by what you do and not by what you say about yourself.

Actions speak much louder than words, but actions are also communicative and sometimes need amplification. This requires what I call Imaginative Communities.

It is about community, as I think that the reputation of a country is built by the people who feel connected to that place and it starts with understanding the shared sense of identity, belonging and purpose.

In addition, it is about countries doing imaginative things, because I think that reputations are built by creating relevant buzz, which is done by reinforcing and showcasing identity in original, creative, innovative, captivating and inspiring initiatives that show the world what the country is about in order to build a distinctive, relevant, authentic, consistent and memorable reputation.

Imaginative initiatives that such countries develop can be policies, infrastructures, projects, investments or events. Well-known recent examples that explain this mechanism are the countries of Estonia and Bhutan, or the cities of The Hague and Oslo, which I write about in my book.

What do you think country branding practice will look like in the 2020s?

Because of the geopolitical landscape, the unavoidable pressure of social media (even in countries with tight internet controls) and the increasing focus on reputational risks (of business site selection and tourism policy), I think that country branding practice will become more strategic; a core government consideration, not something that is solely the responsibility of marketing agencies or communications departments.

Robert is available as a speaker and advisor. Interested in benefiting from his expertise? Please contact us here.

Need help with country branding? Curious what is being done, which pitfalls to avoid? Get in touch!