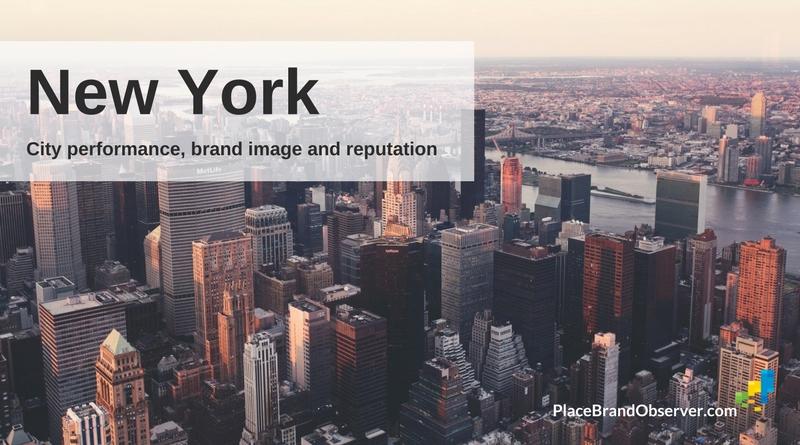 New York, considered America’s cultural mecca and global financial hub, has won over the years the title of capital of the world. With many of the largest creative events taking place in the city, world-renowned landmarks and tons of references in music and pop culture, New York has arguably one of the strongest city brands.

New York was one of the first cities to develop a formalized branding strategy, having benefited greatly from the “I Love New York” campaign, developed by the state of New York in 1977 (the city of New York doesn’t actually own the rights nor does it use the slogan itself).

But how is New York doing according to international rankings measuring reputation, sustainability and innovation?

Ranked 2nd (after London) in the Global Power City Index (2019), New York received the highest scores both in the Economy and R&D dimensions. The city managed to increase its scores for nominal GDP and GDP growth rate. The city ranks 8th for cultivating global talent in the World’s Top Universities ranking.

However, according to the Index, New York failed to maintain its score in Cultural Interaction indicators due to a decrease in the number of world-class cultural events, where it was outscored by London.

When it comes to reputation, the city doesn’t perform so well. Despite being the fourth most familiar city worldwide after Paris, London and Rome, New York was ranked only 24th among 56 cities in the 2018 City RepTrak®. The index considers government effectiveness, environment appeal and economic development and analyses the stakeholders’ engagement with cities.

In terms of economic performance and dynamism, New York was ranked the most economically powerful city worldwide by Citylab’s Global City Economic Power Index (2015). Carrying the title since 2012, New York owes its privileged position to a high GDP, a powerful financial market and a strong metropolitan economy, which produces a total economic output of 1.4 trillion US$.

Acting as a global economic and financial hub and an international center for numerous industries, New York has been known for attracting talents from every corner of the world. However, as much as the city has to offer to newcomers, it is also considered the most expensive city in America for expats, and the 9th most expensive city worldwide (Mercer Cost of Living, 2019).

Is New York a sustainable city?

Although New York can’t be said to enjoy a privileged position in the Arcadis Sustainable Cities Index 2018 (rank 14th out of 100), it was classified as America’s most sustainable city. Followed by San Francisco (16th), Seattle (19th) and Boston (22nd). New York follows the global trend of having a higher ranking for profit (4th) and a lower one for people (30th).

With nearly 45% of its population living at or close to the poverty line, the city has been investing in more aggressive social programs (such as the One New York Plan) to improve the living standards for the most vulnerable (Arcadis Sustainable Cities Index 2016).

Contrary to this global ranking, the 2012 Green City Index, which focuses only on environmental indicators, ranked New York as 3rd in North America after San Francisco and Vancouver. The city’s low water consumption (leader in North America with 262 liters per person a day) and wide use of public transport earned it this position.

Innovation is definitely one of New York’s strengths. Ranked 1st among 500 cities in the 2019 Innovation Cities™ Index, New York has ascended three positions to outperform  Tokyo and London and San Francisco. With a great innovation potential determined by its cultural assets, human infrastructure, and networked markets, New York is the best-ranking city followed by Los Angeles and San Francisco.

New York is the second-best ranking city in the 2020 World’s Best Cities ranking. Its performance is most outstanding in promotion and programming (both ranking 2nd ) that measure the offerings of arts, culture, entertainment and the culinary scene of a city. New York’s ranking in the pillar of people that shows a city’s diversity in terms of immigration, foreign-born residents and education, is somewhat lower, ranking 16th in this year’s study.

How attractive is New York City for digital nomads?

As one of the most well-known cities in the world, New York clearly is a popular destination for digital nomads. However, beware of the city’s high cost of living. According to the Digital Nomad Index – which ranks 56 cities – New York is among the most expensive cities in the world to find a one-bedroom apartment. Similarly, the price of beer is also ranked in the bottom 10.

Interestingly, New York is ranked badly in general in this list and only appears three times among the top 20 of categories included in the study.

NomadList ranks New York 1,046 among 1,333 cities worldwide. The poor ranking can be attributed to the expensive cost of living and the cold winter temperatures. These are definitely something to keep in mind when considering moving to New York.

As for the USA as a country in general, the Digital Life Abroad report ranks it 10th out of 68. Digital life is actually the category where the USA performs best in, out of all categories measuring the quality of life.

Highly praised is the ease of cashless payments (ranked 8th), a similar assessment compared to that of NomadList.

Enjoyed our summary of global rankings and indices on New York’s economic performance, its sustainability, attractiveness for digital nomads, brand strength and reputation? Thanks for sharing!