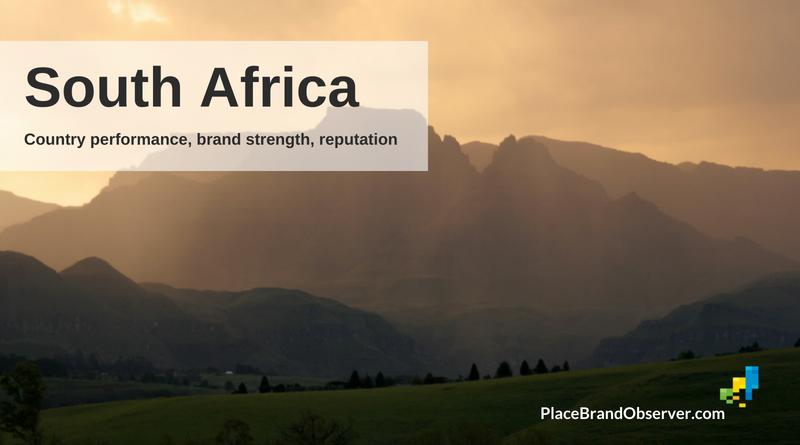 South Africa: how well does Africa’s southernmost country perform in international studies on economic competitiveness and environmental sustainability? Does the reputation of South Africa speak of progress in reducing poverty, overcoming its reputation as one of the world’s most unequal countries? How well does its nation brand perform in comparison to other countries in the region? Answers in this summary of global reports, studies and rankings on country performance, brand strength and reputation.

How attractive is South Africa for starting a new business?

South Africa’s ranking as a place for doing business in the global context is not too strong –it positions 84th in this year’s Ease of Doing Business study. Nevertheless, it holds a strong 4th position in the Sub-Saharan Africa region.

According to this index, the most difficult aspects of doing business in South Africa are trading across borders (145th) and starting a new business (139th). However, the interests of minority investors are rather well assured (13th).

Compared to results in 2008, South Africa’s performance has deteriorated a fair deal, as its overall ranking was 35th just over a decade ago.

A more positive tendency of South Africa’s performance in terms of economic competitiveness is visible in the 2019 Global Competitiveness Index, where it currently ranks 60th out of the 141 countries included in the study. South Africa has regained momentum after political landscape shifts though still needs to mind attention to government adaptability to change (100th) and transparency (62nd).

In terms of transparency, South Africa ranks 70th in the 2019 Corruption Perceptions Index, sharing the score with Hungary, Romania and Suriname. South Africa jumped 3 positions over the last year’s ranking.

South Africa: how attractive for talent

What are the conditions for talent attraction and retention in South Africa?

The country scores rather poorly for talent retention (106th).

How strong is digital demand for South Africa?

South Africa seems to have a strong digital demand, according to Bloom Consulting‘s latest Digital Country Index (2017), where it ranks 29th. Despite being the regional leader, this ranking is five positions lower than in the previous, 2015 study.

In 2017, South Africa did best in the category of investment (10th), while talent (28th), exports (41st), prominence (45th) and tourism (46th) all scored significantly lower in terms of search volume.

Is South Africa an example of environmental sustainability?

The 2020 Environmental Performance Index ranks South Africa 95th, which is much higher than in 2018 when it positioned 142nd. The country has seen a stark shift in ranking over the past few years, ranking 81st in only 2016.

South Africa’s environmental performance in WEF’s  Travel and Tourism Competitiveness Index is not much better. In 2019, its score in the category of environmental sustainability was a mere 3.7, falling below the Southern Africa Average of 4.2 and well behind that of top scoring Lesotho (4.8).

The sub index “Enabling Environment” ranks South Africa 105th, behind The Gambia (103rd) and Rwanda (104th), while the country ranks 61st overall, scoring closely ahead of the Seychelles (62nd).

Which are the most influential aspects of life quality in South Africa?

The OECD brings out that South Africa has made great progress since 1994 by reducing absolute poverty and improving access to education, housing, water and electricity. As a result, well-being has increased substantially. Nevertheless, South Africa performs well in only a few measures of well-being relative to the other 38 countries.

South Africa ranks below average in dimensions such as income and wealth, housing, or health status. The country’s average household net-adjusted disposable income per capita is almost three times lower than the OECD average of USD 30 563 a year. Its score is also below the average in education and skills, civic engagement and environmental quality.

Contrary to many countries portrayed in our country observatory, South Africa is the first country where levels of happiness prove to be higher among the foreign-born than those born in South Africa. This might be the result of high levels of inequality among incomers and, above all, black South Africans, whose income levels continue to be significantly lower.

The 2017 Happy Planet Index, which is slightly more focused on the environmental factors of well-being, has a rather negative prospect of South Africa’s contribution to a happier planet. This year, South Africa is among the bottom 10 of this index, ranking 128th among the 140 countries surveyed for the study. Its score is especially low in life expectancy (130th) and inequality (106th). Its best-performing pillar – wellbeing— puts South Africa on 80th position.

South Africa as a good country

How does South Africa score in studies that focus on a country’s contribution to global well-being and peace?

South Africa does rather well in the latest Good Country index, where it ranks 47th for its overall global contribution. It is an important contributor to international peace and security, ranking 3rd in this dimension. The country also stands out for its role in improving world order and science and technology (ranking 23rd and 18th respectively). Nevertheless, poor performance in the categories of planet and climate (124th) and prosperity and equality (93rd) leave the country at the bottom end of the ranking.

Jumping three positions in this year’s study, South Africa ranks 123rd in the 2020 Global Peace Index. The country was among its region’s three largest improvers in peacefulness, with Côte d’Ivoire and Equatorial Guinea, each making improvements of more than six percent.

How well does South Africa perform in studies of nation brand value and international reputation?

South Africa ranks 46th in the 2019 Nation Brands Index by Brand Finance. In terms of tourism, South Africa is affected by the plight of perceptions that Africa is too far to travel. Nevertheless, the country remains the gateway to Africa, with Johannesburg as its hub.

Meanwhile, South Africa ranks 36th in Brand Finance‘s Global Soft Power Index 2020. Regarded highly for its sporting prowess (17th), the country struggles to maintain its position in governance (37th) and ethical standards and corruption (53rd), due to a range of political complexities throughout the latter half of the 20th century and ongoing.

More about South Africa, its country brand(ing), destination marketing and attractiveness as location, in our South Africa Country Report.

Enjoyed our snapshot of global rankings and indices on South Africa’s performance as country, its attractiveness for talent, investors and visitors? Thanks for sharing!