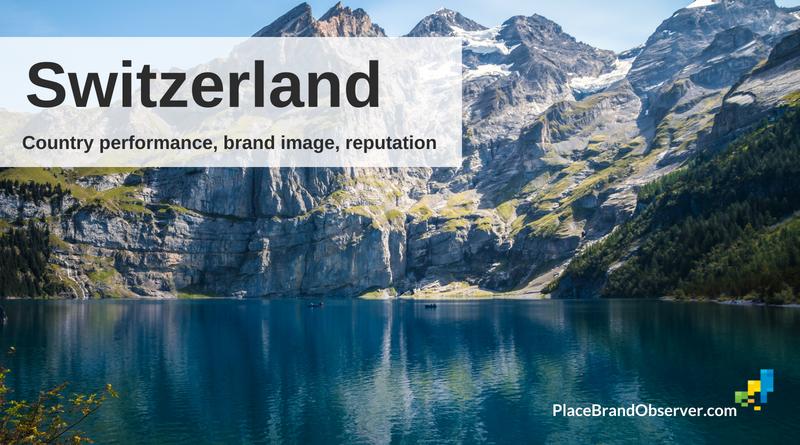 Switzerland: how does one of the world’s wealthiest countries perform in global rankings that measure environmental sustainability, life quality and talent attraction potential? How does Switzerland’s public diplomacy influence its economic competitiveness and global soft power? Answers in this summary of global reports, studies and rankings on country performance, brand image and reputation.

How attractive is Switzerland for starting a new business?

Somewhat surprisingly, Switzerland ranks 33rd in the 2018 Ease of Doing Business index. The only pillar to fit in the global top-10 is getting electricity (7th), all other dimensions that help measure the ease of doing business in Switzerland rank significantly lower. While registering property (16th) and paying taxes (19th) score relatively well, protecting minority investors seems not like a priority in one of the world’s wealthiest countries: here Switzerland ranks 106th.

Compared to a decade ago, Switzerland’s performance has deteriorated considerably: in 2008 it ranked 16th, by 2013 it had fallen to position 28 and its current ranking is another five positions down.

Switzerland’s ranking in the 2017-18 Global Competitiveness Index contrasts drastically with the Ease of Doing Business report. Ever since 2010, Switzerland has been the leader in World Economic Forum’s study on global competitiveness. Its performance is outstanding in almost all the pillars, except for market size, a consequence of the country’s comparatively small size.

Switzerland leads the ranking in labour market efficiency, innovation and business sophistication and holds 2nd place in technological readiness, health and primary education. All other dimensions of Switzerland’s economic competitiveness fit in the global top-10.

In terms of transparency, Switzerland ranks 3rd in the 2017 Corruption Perceptions Index, only topped by New Zealand and Denmark.

How strong is digital demand for Switzerland and how much soft power does it have?

The Soft Power Index ranks Switzerland 7th in its 2017 edition on countries’ global soft power. This is the same position Switzerland had in the first edition of the study, published in 2015.

While according to Brand Finance, the Global Soft Power Index 2020 ranks Switzerland 8th overall, with notable recognition for being the world’s most reputable nation.

Does Switzerland stand out for environmental friendliness?

Compared to 2016, Switzerland has ascended an impressive sixteen positions, becoming the overall leader of the 2018 Environmental Performance Index. It is also the global leader in ecosystem vitality, while the environmental health of Switzerland is ranked lower (18th).

Is Switzerland a good place for living?

Switzerland ranks above the OECD average in all pillars linked to livability, aside from civic engagement. According to the 2017 Better Life Index, voter turnout – which is a measure of citizens’ participation in the political process – was a mere 49% during recent elections. This is one of the lowest rates among OECD members, where average turnout is 69%.  This, however, does not take into account Switzerland’s highly participatory form of direct democracy.

As mentioned, Switzerland scores high in all other dimensions, be it housing (7.0), income (7.5), environment (7.4), and especially health (9.1), jobs (9.2) and safety (9.6). Its best performing pillar is general life satisfaction, where it scores 9.9 out of 10. In other words, Swiss people are the second happiest with their life situation among OECD countries, together with Denmark.

Even though money can’t buy happiness, the 2018 World Happiness Report shows that there is a strong correlation between welfare countries and citizens’ happiness. The top-5 countries of this study all represent Europe’s wealthiest states that have a well-developed welfare system. In 2018 the ranking is topped by Finland and followed by Norway, Denmark, Iceland and Switzerland.

There is a slight gap between the level of happiness of Switzerland’s overall population (5th) and the perception of happiness among the foreign-born (9th) who are somewhat less content with their life quality, than the Swiss-born.

Switzerland also does rather well in the 2017 Happy Planet Index where it ranks 24th. Here, its strongest pillar is well-being, where it holds the position of a global leader. Life expectancy and equality both rank 4th, while the country’s ecological footprint falls in the other extreme of the index, ranking 122nd out of 140.

Switzerland as a good country

Is Switzerland a good country according to studies that focus on countries’ contribution to global well-being and peace?

Yes, it is, according to the Good Country index that ranks Switzerland 2nd in its latest study. The country scores especially high in the dimensions of planet and climate (2nd), culture (4th) and prosperity and equality (5th). Science and technology (8th), health and well-being (6th) and world order (10th) also fit in the global top-10, while science and technology are close behind (11th).

Finally, Switzerland’s contribution to global well-being in the field of international peace and security is significantly lower (44th), mainly because of being an important exporter of weapons.

Switzerland stands out in the 2017 Global Peace Index as the country that has the lowest economic cost of violence (as % of GDP). It was also one of the five countries that had no involvement in ongoing international or domestic conflicts, and no tensions with neighboring countries.

In the overall ranking, Switzerland emerges as the 9th most peaceful country in the world, albeit two positions lower compared to the previous edition.

How well does Switzerland perform in studies that analyse nation brand value and international reputation?

Brand Finance’s 2017 Nation Brands Index ranks Switzerland as the 2nd strongest nation brand, after Singapore. With a brand value of US$1,014bn, Switzerland scored as the 14th most valuable nation brand in 2017, only one position lower than the 2016 study.

By contrast, Switzerland has improved its performance in the 2017 Country RepTrak by two positions, ranking as the 2nd most reputable country in the world. It does especially well for its effective government (2nd), advanced economy (3rd) and generally appealing environment (6th).

Enjoyed our summary of global rankings and indices on Switzerland’s economic performance, its sustainability, attractiveness for digital nomads, brand strength and reputation? Thanks for sharing!