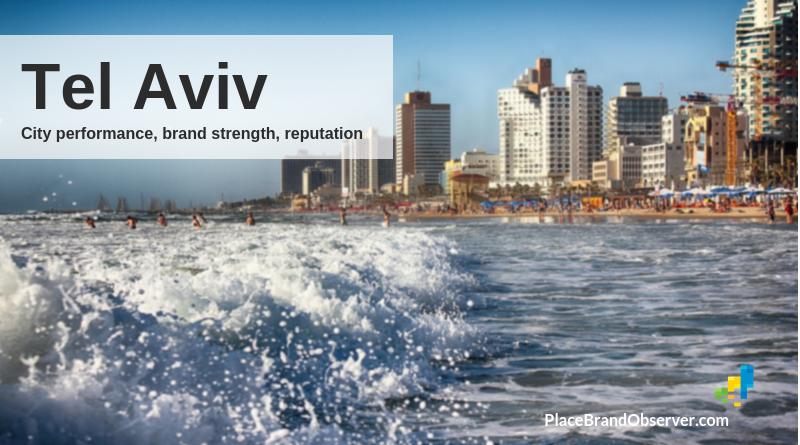 Tel Aviv, Israel’s second-largest city, is often called the ‘party capital of the Middle East,’ and praised for its nightlife. It is one of the most touristic spots of Israel and one can find a wide variety of museums in the city. Tel Aviv has also built itself a reputation for being start-up friendly. But how does it fare in terms of city performance, brand strength and reputation?

Economically and financially, Tel Aviv is doing well. It is widely considered the economic and technological centre of Israel. The fact that the area is unsuitable for farming might have helped to establish such a profile as tech-savvy and innovative.

According to the latest Global Financial Centres Index 26, Tel Aviv ranks 22nd, a leap in one spot since the previous version of the index. Tel Aviv ranks 3rd in the region of the Middle East and Africa.

Tel Aviv is also one of the most influential cities of the Middle East. According to ATKearney’s 2019 Global Cities Report, it ranks 53rd worldwide, in comparison to the 57th position in the previous year (though having lost 7 spots since 2012).

How livable, how attractive?

Israel has the highest concentration of museums per capita in the world, many of which are located in Tel Aviv.

Despite being much liked as a holiday destination, Tel Aviv only shares the 49th position of top cities (Ipsos Top Cities 2017) – out of 60 cities. This survey asks respondents in which city they would like to do business, live and visit.

Tel Aviv: how sustainable, how innovative?

Many cities in the world recognize the importance of green areas. Tel Aviv’s green canopy covers 17,5 percent of the urban area, according to the Green View Index. This means that Tel Aviv has scope to improve its urban vegetation.

Tel Aviv is ranked 41st on the list of the Global Innovation Cities™ Index 2019. This is a jump in 3 spots from the previous year’s list. However, the city is still ranked one of the best, out of 500 cities, and ranks 2nd in the Middle East region just after Dubai. The ranking is based on 162 indicators related to factors that influence innovation.

Tel Aviv is considered one of the digital nomad destinations of Israel. It offers high-speed Internet and plenty of free Wi-Fi zones to work in (Digital Nomad List). This apparent attractiveness is not surprising, given Israel’s performance in Digital Life Abroad. Israel is ranked 6th in this report and appears among the top ten in 3 of the 10 categories covered by the report.

Add to that the annual hours of sunshine, and Tel Aviv comes out as a great digital nomad destination. Still, Tel Aviv is an expensive city to live in.

Enjoyed our summary of global rankings and indices on Tel Aviv’s economic performance, its sustainability, attractiveness for digital nomads, brand strength and reputation? Thanks for sharing!