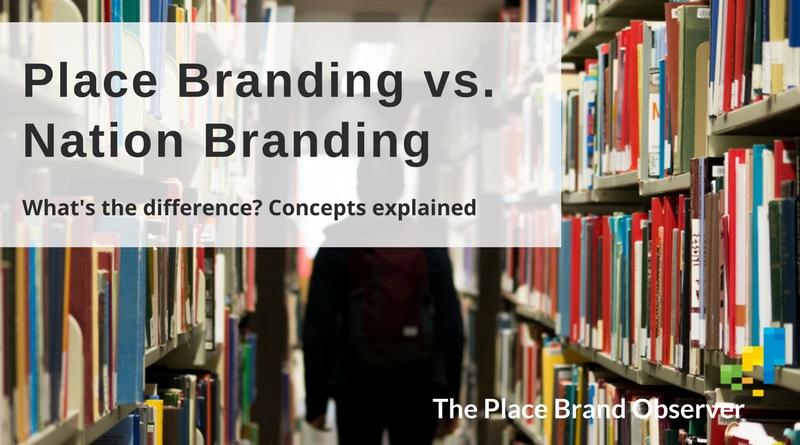 There has been quite some discussion in academic literature about the precise meaning of place branding and how it differs from nation branding. Often, both terms are used to refer to the same concept. Below a summary of academic literature on the link between the two terms.

As Moilanen and Ranisto (2009) point out, place brands are all about making a place’s companies and investment attractive, to support its tourism and export industries, serve public diplomacy and to provide its citizens a sense of identity and self-esteem.

While academic literature on place branding and national branding does not always strictly distinguish between the two terms, a subtle difference exists. According to Olins and Hildreth (2011), unlike place branding’s outward focus, national branding, at least from a political or cultural-critical perspective, is associated with nation-building and characterized by an inward focus, where it is mostly perceived as a way to reconstitute nations both by means of ideology and praxis (Kaneva, 2011).

Following a political approach, national branding is seen as a powerful political tool, especially for small, peripheral nations eager to strengthen their economic position and to compete against the economic, financial or military clout of superpowers (Volcic & Andrejevic, 2011).

However, considering that the vast majority of academic literature on nation branding discusses it as a strategic means to boost a country’s competitive advantage (Kaneva, 2011), literature on national branding does not always differ between the inward vs. outward focuses of the two concepts.

In fact, the two concepts merge in their almost identical purpose to promote a certain geographical location to a target audience, to make a place’s tourism and export industries appear attractive, and to support public diplomacy efforts (Moilanen & Rainisto, 2009).

According to Anholt (2007), who is widely accredited with having coined the term[1], national branding is really just a metaphor for how effectively countries compete with each other for favourable perception, be it with regard to exports, governance, tourism, investment and immigration, culture and heritage, or people.

In this sense, national brands are not much different from the conceptualization of place brands. What is more, when perceived as ideas, emotions, or collections of perceptions (Fournier, 1998), both national and place brands are largely intangible and socially constructed (Berthon et al., 2011).

Discourse is essential in this regard, particularly considering general acknowledgement that “understandings and experiences of places are mediated by a range of everyday texts through which landscapes are presented” (Gibson & Davidson, 2004, p. 390).

[1] Anholt has since distanced himself from the notion of nation branding, arguing that the way in which it is used in academic literature and practice is misleading as it suggests a nation could be branded into existence (Anholt, 2010, 2011).

Know of a new author or perspective on the difference between nation branding and place branding? Help us develop this page further and in return benefit from free access to our premium content: get in touch for details.