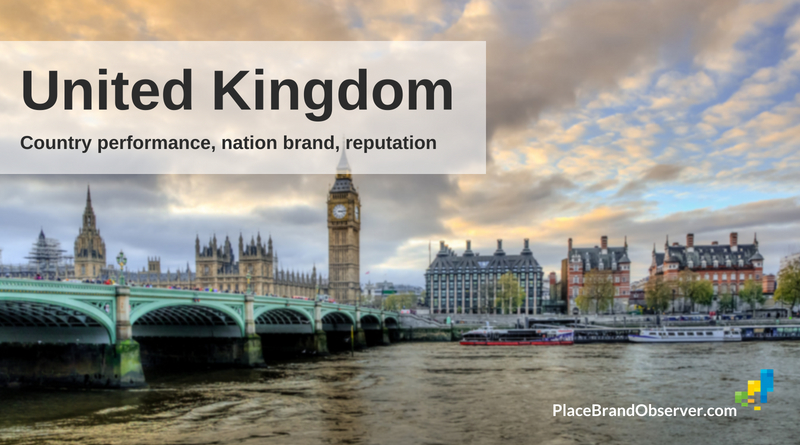 United Kingdom: How does the UK perform in global rankings measuring talent attraction potential, public diplomacy, soft power strength and environmental sustainability? What influence has the Brexit vote had on the international reputation of the United Kingdom? Answers in this summary of global reports, studies and rankings on country performance, brand image and reputation.

Doing business in the UK

Is it easy to start a new business in the UK?

The UK’s overall ranking in the 2018 Ease of Doing Business index is 7th. It scores highest for ease of getting electricity (9th) and for protecting minority investors (10th). UK’s performance is weaker in the section of registering property (47th) and enforcing contracts (29th). The country’s ranking in 2018 is three positions lower than a decade ago, and two positions down from its 2017 result.

The United Kingdom’s position in the 2017-18 Global Competitiveness Index is similar, ranking 8th among the 137 participant countries. Its strongest assets, according to this study, are technological readiness (4th) and labor marker efficiency (6th). Its weakest pillar is its macroeconomic environment (68th); an exception in its generally good performance in the competitiveness index.

The UK’s performance in this index is remarkably better than a decade ago, when it ranked 12th. But it scores one position lower than in the 2016-17 edition.

Talent in the UK

How competitive is the UK in terms of talent?

The Global Talent Competitiveness Index ranks the UK 8th in its 2018 study. The country is consistently around the top 10 in all pillars, except vocational and technical skills (25th), which contrasts markedly with the pool of global knowledge skills (3rd).

The UK also stands out as attractor of talent, with its good external openness (6th) and talent impact (3rd). By contrast, internal openness (18th) has room for improvement—particularly the indicators related to gender equality, where the country is still lagging behind, according to the index.

How big is the UK’s international influence?

Brand Finance‘s Global Soft Power Index 2020 ranks the United Kingdom 3rd, ahead of France (6th), the closest trailing European nation. The UK’s international influence is measured on three metrics; influence, reputation and familiarity. The next years will be telling whether Brexit will play a significant role in impacting these variables and overall have an affect on the nation’s appeal and attraction.

How does the UK perform in terms of sustainability?

The UK made an important leap in the 2018 Environmental Performance Index. This year it is ranked 6th, which is an impressive six positions higher than in the 2016 study. While it leads the ranking in water and sanitation and scores high in wastewater treatment (4th), the country is at the far end of the ranking for the inadequate protection of its forests and fisheries (both 122nd).

UK’s environmental sustainability performance is considered weaker in WEF’s Travel and Tourism Competitiveness index. In 2017 it ranked 24th in the study which analyzes the performance of 136 countries. Here it also scored highest for the treatment of wastewater (4th) and lowest for forest cover change (97th) and costal shelf fishing pressure (102nd).

The UK achieves a Happy Planet Index score of 31.9 and ranks 34th of all the countries examined. It does comparatively well in equality (19th), well-being (20th) and life expectancy (24th), but gets a much lower score for its ecological footprint (107th).

Life quality in the UK

What do indices of happiness and life satisfaction say about life quality in the UK?

The United Kingdom performs well in most measures of well-being in the 2017 Better Life Index. It ranks above average in measures such as personal security, civic engagement and health status.

On the other hand, there is a considerable gap between the richest and poorest – the top 20% of the population earn nearly six times as much as the bottom 20%. Also, the country performs below average in work-life balance and housing, showing that long hours of work do not necessarily guarantee high life quality. With a life satisfaction score of 6.7 out of 10, the British are close to OECD average.

In 2018, the UK ranks 19th in the World Happiness Report with its focus on migration and how it affects the levels of happiness of both migrants and original residents of the host country. The report brings out that, in general, where immigrants are made feel welcome and where they integrate well, immigration works best. According to the report, a more tolerant attitude in the host country will prove best for newcomers and for existing residents alike.

How much is the UK investing in global peace and overall well-being?

The United Kingdom shows high performance in the Good Country Index, ranking 8th in the latest study. Its contribution is biggest in the dimension of health and well-being (4th) and science and technology (5th). The UK also receives high scores for its global contribution to culture, and planet and climate (both 11th). Prosperity and equality (35th) and international peace and security (48th) are UK’s weakest pillars, according to the index.

The UK’s ranking in the Global Peace Index Report 2017 is 41st, which is two positions lower than in 2015. According to 2015 data, the UK had the 10th highest cost of violence containment, with an annual budget of $140bn. Despite these figures, the report brings out that the UK has shown a trend of decreasing violence containment expenditure in recent years.

How well is the UK performing in studies of nation brand value and reputation?

Brand Finance’s Nation Brands Index ranked the UK as the 5th most valuable nation brand, at $2.942bn in 2017. The 6% of annual growth of the value of its nation brand is moderate compared to Japan’s 15% (ranked 4th) or China’s impressive 44% growth in nation brand value, in 2017.

Brand Finance positions the UK as the 10th strongest nation brand, ranking it below smaller nations such as Finland (6th) or Singapore (1st).  That said, it is the only nation making it into the top-10 of both rankings.

The 2017 Country RepTrak ranked the UK 18th in its index measuring international reputation. Its reputation increased an approximate 3.8% throughout 2016 and fell five positions in the ranking.

Its performance is much more positive in the dimension of advanced economy, where it ranks 7th. The study also highlights that the self image (5th) of the British people regarding their nation is much stronger than its reputation abroad, showing a rather strong difference between internal and external valuation.

The UK in online searches

How popular is the UK in online searches?

The UK is the top performer in Bloom Consulting’s 2017 Digital Country Index, showing an important improvement from the 2015 study where it ranked 7th. Its strongest asset is in searches linked to country performance (1st); talent scored 3rd, tourism 4th, with exports and investment both in 6th position.

Enjoyed our summary of global rankings and indices on United Kingdom’s economic performance, its sustainability, attractiveness for digital nomads, brand strength and reputation? Thanks for sharing!