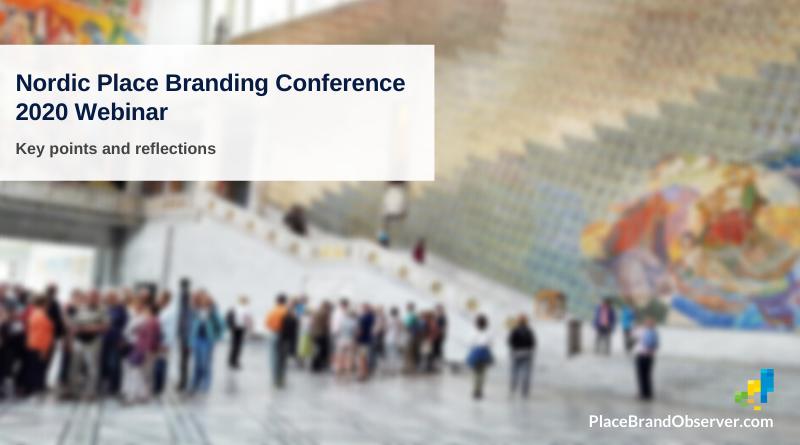 Last week I participated in a webinar, on the day – April 2nd –  when the Nordic Place Branding Conference should have taken place. Instead, the 80+ of Nordic place branders who joined Pärtel-Peeter Pere (moderator) of Future Place Leadership and his team online, enjoyed e-presentations and keynotes, getting a taste of what to expect at the actual conference this November. If you’ve missed it, read on for a few observations and some of the main insights from the webinar.

Greg Clark, who describes himself as an urbanist who enjoys place branding, in his presentation focused on the “century of urbanization” and how the coronavirus pandemic might affect how we feel about it, especially our appreciation (or not) of densely populated spaces.

Greg stressed that urbanization can be good or bad. Good urbanization: cities are developed in a way which makes them more resilient and climate-friendly. He shared how over 700 cities worldwide are already working on becoming “zero CO2 communities”, leading to urban innovation. One example: the Catalan capital of Barcelona (Spain’s second largest city), which he has been advising for several years (Barcelona’s city branding trajectory is a truly intriguing one – contact me if you’d like to know more about it).

What is city branding about?

I also found Greg’s five main functions of city branding very noteworthy – essentially the answer to “what is city branding all about?”. In his words, it’s about:

4) Helping to plan future city, based on organizing narrative of city branding;

5) Positioning a city vis-à-vis the surrounding region or nation state, or supranational organizations. City branding helps cities to communicate with those layers.

Unfortunately, too much attention tends to be paid to the first function of city branding: selling the city. To give place branding a good “brand”, Greg urges us to focus much more on functions 2-5.

Nordic cities are leading the race in promoting urban innovation to counter climate change and to promote sustainability. They have a particular opportunity to demonstrate to the world why cities are good for us, and how the urban century can be navigated.

Greg in the webinar also pointed out that COVID-19 is an opportunity for cities to  address overcrowding and overtourism, as now they can implement measures to make their destinations more ecologically and socially sustainable: indeed a unique opportunity for a fresh start, for example by focusing on niche tourism strategies in destination marketing, at the time of recovery.

Place branding: the diplomacy of deeds

Simon Anholt – you’ll know him from his ground-breaking books on place branding and, more recently, his frequently expressed concern about “how place branding is failing and mostly a waste of taxpayers money”.

It’s precisely because of Simon’s critical stance towards place branding now, that I find it good to see him appear at industry get togethers, such as last year’s City Nation Place forum and now the Nordic Place Branding webinar (and – in November – the conference in Oslo). We should never shy away from challenging our thinking (or having someone else challenge it). Simon pushes us to ask ourselves why and how we do what we do in place branding, especially when public funding is involved.

In his webinar presentation, Simon suggested that place branding is best understood as “diplomacy of deeds”. In other words, not a communications exercise, but CSR at the level of nation states, cities and regions. Just like in the corporate world in which organizations are measured by what they do and how, rather than what they say, the “branding” of cities, regions and countries is about ensuring the place is “good” to its own community and to society and the ecosystem at large.

Simon finds this to be the main misunderstanding between place branding and place marketing, the latter being about the legitimate promotion of a place’s assets or appeal to specific target audiences.

Place branding (despite having coined it, Simon doesn’t like the term very much), is really about changing the overall image of a place by changing the place itself. His vision of a Place Branding 2.0 is by the way very much in line with our panel’s views on place branding and its usefulness.

Simon also urged cities and regions to work together, to collaborate and cooperate. Unlike some may think, working together does not make cities or regions less competitive, he stressed in the presentation. Rather, we achieve more and can do better when cooperating.

A word about “earned” media coverage

Simon’s enthusiasm about the power of social media is reflected in his emphasis on not caring too much about having traditional media support a place’s storytelling and dissemination. He advises against spending money on sharing a place’s story or idea via established media.

This is an interesting topic and one much debated among journalists and publishers (including myself). As much as I sympathize with the idea of “earned” coverage and relying on users / customers / visitors to spread the good word, I have also become critical about social media as a reliable and trustworthy communications channel (too much noise, information overload, secret algorithms and bots, even less transparency and accountability as in the traditional media – the list is long).

My advice: do great, noteworthy things and have “users” share those via their social media channels, but also invest in editorial guidance and access to established reader communities provided by independent publishers.

Integrity of purpose is key

Another point which Simon raised in the webinar is, I think, easy to agree with: integrity of purpose is essential. You really need to do city branding (or anything else really) for the right reasons and motivations. Whatever initiatives you undertake, they must be the right thing for your place and community.

Place branding professionals have a bit of a missionary role, to convince public administrations about the important functions of city branding – beyond place promotion (see Greg Clark’s points above).

Place branders (at least those who take it serious and live up to the concept) are change-makers and need to educate civil servants on what place branding is about, especially that it’s not primarily about promotion. – Simon Anholt

The city of Utrecht, Ireland as filming destination and Sweden’s rural region of Landsbyggare were the three case studies we heard about during the webinar.

Ank Hendriks (we’ll publish her interview this Thursday) in her talk presented how the city of Utrecht in the Netherlands has made healthy urban living the core of its positioning and placemaking strategy.

One of the key points from Ank’s presentation is that Utrecht’s healthy urban living “brand” is not owned by government, but a collaboration among various institutions and stakeholders, also outside of the city and country. Details about her work and the Utrecht approach to city branding in the upcoming interview.

Brian Twomey of Tourism Ireland shared how the organization managed to attract the film production of Game of Thrones, and how they’ve been trying to build a bridge between the scenes of the show and the real destination, for instance by delivering real-time contextual content as the seasons were shown on Netflix. The hope is for film tourism to continue into the future – similar to what New Zealand so famously managed through the Lord of the Rings and Hobbit movies.

Eva Jilkén introduced us to Landsbyggare, illustrating how the region seeks to attract talent through imaginative community collaboration. More about her and this project in our upcoming interview with Eva.

You missed the webinar and would like to see the recording? Sign up for the Nordic Place Branding Conference 2020 and you’ll get full access to this and much more. TPBO is a proud supporter of the event, both online and in Oslo this upcoming 25-26 November.