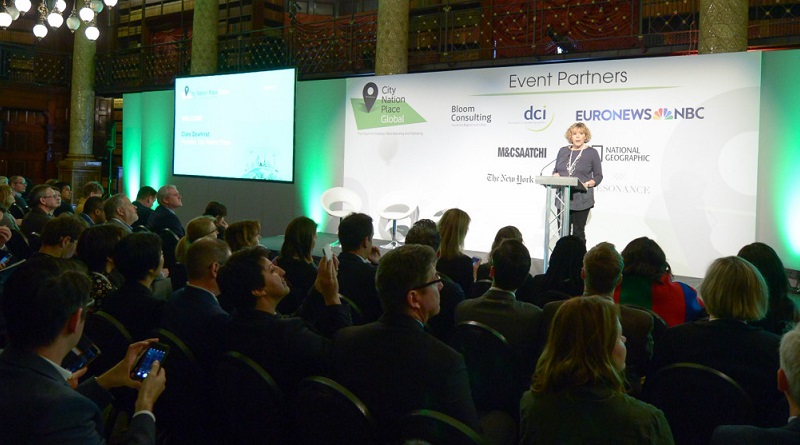 Doctoral researcher Maja Jović earlier this month attended the City Nation Place Forum in London as a special observer (an opportunity which she heard about via our Facebook page). In this post she shares her key takeaways from the event.

In the last couple of years, The Place Brand Observer played a very helpful role for my research, as a crucial source of articles, leading names and on-going trends in branding. Coinciding with the very end of my doctoral thesis – a few days before viva! – this help came in the best form: I got a chance to attend City Nation Place in London.

It was a perfect opportunity to reflect on my own work and its placement, and meet the faces behind references that have revolutionised the field of place making and place branding. Here, I am sharing some of these reflections.

In my last three years of active research around post-conflict place branding, focusing on transitional nations, the question of national stories and identities, their “use” and (re)production became pivotal. At the same time, a considerable amount of content points to the notions of digital age, lack of borders and national identities as an outdated concept.

The last point is particularly hard to argue in 2017, a year of trying to deal with the aftermath of Brexit and a mere few weeks after Catalonia voted for independence.

This was in part addressed by the opening keynote speaker, David Adam of Global Cities, when talking about soft power and the role of cities in reshaping the world. David sees them as inherently open, helping reach not just investments, but ideally contributing towards a peaceful and prosperous world. In the current climate, this was a much-needed breath of inspiration and in a way, it set the tone for the rest of the day.

In the panel following, Joanne Roney, Chief Executive of the Manchester City Council, allowed us an insight into what seems to be a truly collaborative project and enthusiastic team behind managing Manchester’s city brand. It did not take long to see the reasons behind the success – there was a notion of pride in the city, the feeling of belonging, a home, and working with, rather than for communities.

Afterwards, Mike Duffin of the U.S. Department of State addressed the unfortunately hot topic of urban resilience after a conflict or attack. It was particularly interesting to see both panelists equate building resilience to building social cohesion in a discussion afterwards.

Coming freshly off the PhD train, my head is buzzing with new findings relating to the role of residents in a post-conflict environment, and this was particularly relevant. Once again, as throughout the day, the power of communities and the sense of belonging took centre stage, both for vulnerable cities after attacks, as well as those with undisrupted narratives.

In the following part of the Forum, we were treated to several diverse case studies of nation and city branding from leading strategists. Malcolm Allan and Jose Torres gave us a crash course into nation branding, as well as an insight into what to expect when things go unexpectedly. This was illustrated with the experience of branding Paraguay and a coup immediately after launching the new brand campaign.

As an emerging contributor to the field, this session called for some furious note taking, from the importance of recognising (and capitalising on) emerging phenomena or recognising core values as in the case of Finland, storytelling around Hull, and success stories from Iceland and Austin.

While it seems obvious when surrounded with examples of resilience, accomplishment and identification with successful brands, this point is often missed in desperation to (re)position yourself on a world map. Through the prism of my own interests, this was arguably the leitmotif of the day – the importance of listening to the needs of stakeholders and responding to the needs of those living the brand.

The breakout sessions offered a wide range of choices, but as an architect, I naturally gravitated towards the Placemaking and Place Branding session. We heard about two cases, that of Temple Bar and Alserkal Avenue in Dubai, opposing in context and challenges they face.

It was fascinating to hear Martin Harte of The Temple Bar Company talk of managing shared space or resolving conflicts between businesses and residents in a historic core, as well as Vilma Jurkute‘s awe-inspiring story of creating a cultural destination from warehouses, ultimately attracting over 400,000 visitors.

In the third session of the day, Peter Debrine of UNESCO humorously noted: “We love storytelling almost as much as we love lists”, amidst showing the crucial role of heritage in place branding.

The penultimate session brought us the stories of inner workings behind London’s Autumn Season, as well as that of branding Peru, where once again the residents play the main role.

Lior Meyer showed that Israel is very much aware of the importance of a strong relationship with journalism. The role of media, particularly in a post-conflict or sensitive environment, would be lost on only the most optimistic of us. Knowingly or not, journalists (re)shape perceptions of countries, (re)create contexts, and leave long-lasting effect on a country’s image.

Lior also explained the role of brand tensity in the case of Tel Aviv, which was particularly interesting to note.

Finally, resonating very strongly with me personally, was Peter Kentie‘s account of branding Eindhoven and “the ESTestonia case”. After years of focusing on cases where residents struggle to find their own identity or identify with the national one, here we have tattoos of those who relate to the visual identity and the brand so strongly and proudly. What a success!

The story of e-residence and Estonia immediately brought Benedict Anderson to mind, and I wonder what he would have thought of it in relation to his imagined communities.

Instead of a summary, I would like to allow the adjectives and general tone of this article speak for my impressions of the day.

I would also like to thank The Place Brand Observer for this wonderful opportunity, as well as City Nation Place organizers Clare and Martin Dewhirst for the hospitality, in hope I will see some of the newly made acquaintances next year.

Connect with Maja Jović on LinkedIn.