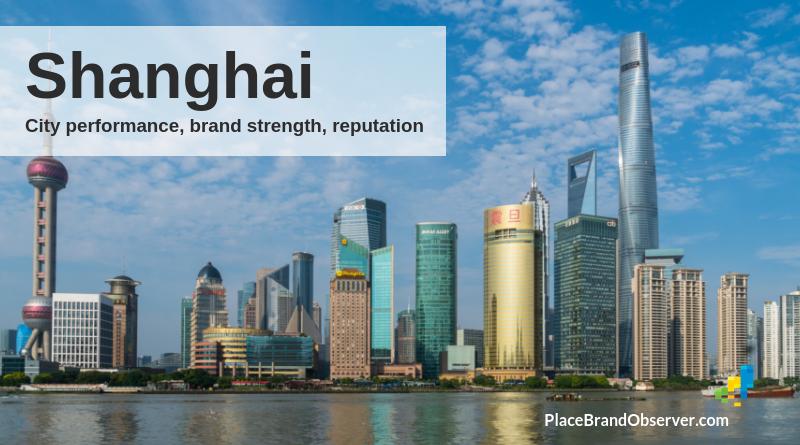 Shanghai, characterized by its iconic and modern Lujiazui skyline, is one of the biggest cities in the world. It is a major transport hub, as well as an increasingly important global financial center. Home to the largest free-trade zone of mainland China, how does this huge metropolis do in terms of city performance, brand strength and reputation?

Shanghai is located on the eastern coastline of China and sits at the tip of the Yangtze River. Its name literally translates into ‘upon-the-sea,’ which could be seen as symbolic for its importance as a harbour city. According to Llyod’s List Top 100 Port Reports (2019), Shanghai is the busiest transshipment hub of the world, since 2010.

Not just is the city important in terms of transport, it can also be considered one of the most important global financial centers. The latest Global Financial Centres Index ranks Shanghai 5th, closely followed by Hong Kong and Singapore.

Shanghai a good place to live?

The city’s strong economic performance is not reflected in its attractiveness as a healthy city to live in. The World’s Healthiest Cities study ranks Shanghai only 87th (out of 89 cities). Especially the ratio of obese adults, the food and air quality and the (easy) accessibility to fast-food outlets have contributed to this low position.

The Sustainable Cities Index 2018 comes to a similar verdict. In the sub-index ‘people,’ the city is ranked 67th. This is a little better than the study’s overall position for Shanghai (76th), but still very low.

It should be taken into account that Shanghai is doing better than most other ‘megacities’ with a comparable population size (such as Mumbai or Beijing).

According to the Safe Cities Index 2019, Shanghai is a fairly safe city – the 32nd safest city out of 60 ranked cities in the world. In the list of similar ‘megacities,’ Shanghai performs in the better half of the ranking. Its infrastructure safety ranks 34th.

Shanghai a city for digital nomads?

Shanghai offers plenty of nightlife possibilities, it is very walkable and considered female-friendly (Nomad List). On the other hand, the city is not regarded as LGBT-friendly and the people density is very high. According to this list, the Internet is seen as mediocre.

If moving to Shanghai as a digital nomad, one has to bear in mind China’s restrictive policies towards foreign-based websites. According to the Digital Life Abroad report by InterNations, access towards such media outlets is considered the worst among the 68 ranked countries. Due to this position and 3 other bottom 10 positions in different categories (speed of the Internet, availability of administrative or government service online and getting a local mobile phone number), China ends up 67th overall.

As an important transport and commercial hub, Shanghai finds itself in 4th position for ‘Accessibility’ (Global Power Cities Index 2019). Despite the 4th position in this field, the city has dropped from 26th to 30th place in the GPCI overall – its worst performance since 2010. Its strong economic performance does not outweigh its poorer performance in other areas.

Shanghai is only ranked 48th for its international reputation, according to the City RepTrak® report in 2017 and 2018.

Enjoyed our summary of global rankings and indices on Shanghai’s economic performance, its sustainability, attractiveness for digital nomads, brand strength and reputation? Thanks for sharing!