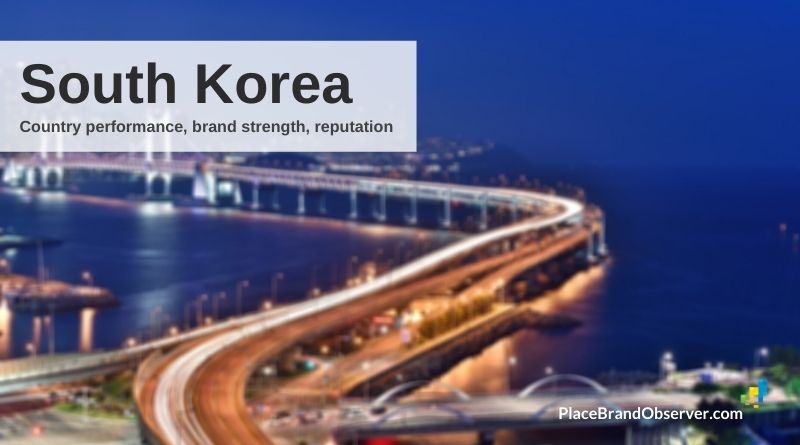 South Korea: home to a great history of tradition and culture, the nation and its people have steadily become a top competitor in terms of soft power and talent attraction. The Korean lifestyle, abundant in health and wellness, and the nation’s openness to the global community in terms of trade and tourism have aided in leveraging the country’s position. But how does South Korea fare as a contributor to global well-being, how strong is its country brand and reputation?

With thanks to Brand Finance, Ipsos and Bloom Consulting for supporting our country profiles by contributing latest research insights and benchmarking data.

How well does South Korea perform when assessing reputation, perceptions, and brand value?

The Digital Country Index 2017 ranks South Korea 22nd worldwide, seeing a dip in ranking of three positions compared to the year before. South Korea experiences its greatest search volume in the dimension of prominence (74%), securing the 11th position in this category.

What does the international community think about South Korea as a place to live, do business, and visit?

The Expat Insider survey 2019 notes South Korea’s steep decline as expat location, grouped among fellow weak performers such as Cyprus and Costa Rica in terms of expats’ satisfaction with various aspects of life abroad. South Korea joined the Expat Insider in 2014 ranking 13th; the country now finds itself at 55th.

According to the Ease of Doing Business Ranking in Doing Business 2020, South Korea secures the 5thposition, ahead of the United States (7th), Georgia (8th), and the United Kingdom (9th). One of the contributing factors to the Republic of Korea’s position, as determined by the World Bank, is the relatively newly introduced feature to its online filing system for corporate income tax and value added tax, making the process to pay taxes easier and more efficient for organizations.

How “good” is South Korea to the world?

The Caf World Giving Index (10th edition) ranks the Republic of Korea 57th, behind Italy (54th), Kyrgyzstan (55th), and Cameroon (56th). South Korea scores most impressively in the subfactor donating money (38th), with the category being led by Myanmar in 1st. The world’s top performers in this category are often associated with their national majority religion and the common practices of said religion in terms of sharing wealth with less fortunate individuals.

Is South Korea a safe and happy place?

The Global Peace Index 2020 ranks South Korea 48th, seeing a jump of nine positions over last years’ index findings. South Korea now sits ahead of Indonesia (49th), Laos (50th) and Serbia (51st), all of which fall in the high sector of the ‘State of Peace’ spectrum, as defined by the Institute for Economics & Peace. South Korea is positioned 8th regionally amongst its fellow Asia-Pacific countries, led by New Zealand and Singapore.

The Institute for Economics & Peace similarly ranks South Korea within the no impact zone in terms of ‘Impact of Terrorism’, in the 2019 Global Terrorism Index. South Korea ranks 116th, only two positions behind Switzerland (118th), and experienced a jump in ranking of two positions over the previously reported index, positively trending towards leaders such as Bhutan and Uzbekistan.

How well does South Korea perform in terms of environmental sustainability?

The 2020 edition of the Environmental Performance Index (EPI) ranks South Korea 28th. The EPI analyzes the performance of 180 countries, scoring and ranking these countries on their environmental performance using the most recent year of data available, as well as providing calculable changes in scores over the previous decade.

What are the conditions for talent attraction and retention in South Korea?

South Korea ranks 16th in terms of Travel and Tourism Competitiveness (Index 2019) according to the World Economic Forum. The T&T Competitiveness Index measures the set of factors and policies that enable the sustainable development of the travel and tourism sector, which contributes to the development and competitiveness of a country. South Korea’s impressive ranking is among fellow Asia-Pacific countries such as China (13th), Hong Kong (14th), Singapore (17th) and New Zealand (18th).

According to the World University Rankings South Korea is home to two of the top 100 universities worldwide; Seoul National University and Sungkyunkwan University (SKKU).

Enjoyed our summary of global rankings and indices on South Korea’s economic performance, its sustainability, attractiveness for talent and investors, its brand strength and reputation? Thanks for sharing!