What Benjamin Franklin Would Think About Digital Nomads 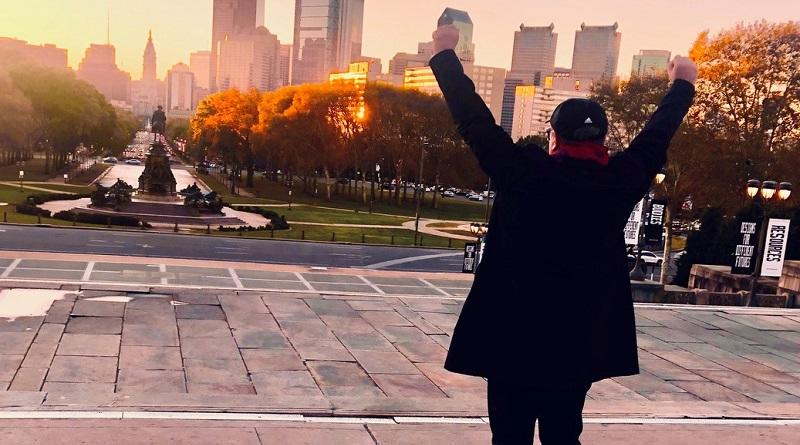 Julian Stubbshttps://www.upthereeverywhere.com
Globetrotter, e-ployee and Founder of UP THERE, EVERYWHERE

It’s a warm fall day in Philadelphia and I’m sitting in Little Pete’s classic diner, close by the Philadelphia Museum of Art, and I’ve just achieved the ambition of a lifetime.

I’ve run up the very same steps featured in the film Rocky and stood atop them, with my arms raised, and turned around to face towards downtown Philly. The scene is iconic and one that nearly almost everyone of my generation knows.

Aside from the film Rocky and this iconic image, Philly is a great city, lost a little in the shuffle between New York and Washington DC, but go there and appreciate it as a place with its own vibe. Less frantic than the big apple, and more historic than DC. It was America’s capital for a brief period, before the site on the northside of the Potomac was finally agreed in a deal with southern politicians.

Philadelphia was also home for many years to one of America’s greatest ever thinkers, the ultimate polymath and Renaissance Man – Benjamin Franklin. Tucked just behind my hotel on Arch Street in the historic quarter, is Christchurch Burial Ground and the grave of the great man himself.

As I’m writing this and taking some time to work on client projects at Little Pete’s, I get to wondering what he would make of the modern world, and more specifically the digital age we now live in?

At my own organization, UP THERE, EVERYWHERE, we work remotely every day of the week. We work in distributed teams across the globe, using the great digital tools we now have to seamlessly transfer files and ideas across continents at the speed of thought. I often choose to work in a coffee shop, or museum, as I find it conducive to creative thinking.

You could call me a digital nomad, or e-ployee, as we call them in UP.

What would Benjamin Franklin make of all this and how we can choose to work wherever we want and at whatever time we decide?

As a great traveler, revolutionary, and a man who supported freedom, I get the feeling Benjamin Franklin would have loved it.

This series of blogs will explore the whole idea of being a digital nomad and give some input as to what makes a great location to work from and what places we feel are leading the way when it comes to attracting this new age worker.

Digital nomads and the work revolution

Digital nomadism has always been perceived as cool, but now it has become mainstream.

Provided you have an Internet connection and a power source the world is your office.

Making this work-anywhere-anywhen way of life a whole lot easier has been a plethora of services and businesses that have sprung up recently. Examples include Jobbatical, co-living communities like Roam and tour operators like Nomad Cruise.

A major factor behind the phenomenon has been the gig economy which, in turn, has given a big fillip to the flexible office market.

As more and more people are putting their health and happiness before money and a conventional career path, this trend is set to continue apace. Indeed, Pieter Levels, the founder of nomadlist.com, estimates that there will be a billion digital nomads by 2035.

But consider this: according to MBO Partners, some 4.8 million Americans describe themselves as digital nomads. This stat is interesting, not least because it may well give us of the glimpse of the future.  Many pundits regard the Digital Nomad is the morning star of a world order where work/life balance, flexibility and the ability to control one’s destiny will be deemed as important as money.

Their second most important finding was this: a staggering 17 million Americans, who at present are not digital nomads, say they will become one in the next couple of years. Whether they do so or not, this goes to show that more and more people regard digital nomadism as a realistic, not to say desirable line of work.

The digital nomad then appears to have entered the mainstream, no longer the preserve of a few laptop-wielding beachcomber in Bali. What’s more, we now have legions of armchair digital nomads, who   follow the doings of digital nomads across the world with vicarious interest.

While we may well be at the dawn of a new brave world of work, the notion of living and working in different places is by no means new. Think of the strolling players of Elizabethan times, tinkers, snake-oil merchants, journeyman carpenters, foreign correspondents, soldiers, circus performers and so forth.

What is utterly new is this: the ability not only to work anywhere but the ability to send it instantly.  As Mark Curtis puts it in his book, ‘Distraction: Being Human in the Digital Age’:

“Technology has created a permanent fifth dimension in our lives – virtual space. Every time human beings have perceived a new dimension, it’s led to seismic changes in society.”

True, in theory a copywriter could send in his copy, but a website could not be built in this fashion and it would be both impractical and time consuming for an illustrator to send artwork by post.

That’s why, for the most part, the nature of this work is necessarily intangible. It’s ideal for app developers, online marketing, SEO, infopreneurship and blogging, less so if you’re a farmer or a police officer!  And the same holds true for the ‘remote worker.’

Difference between digital nomad and e-ployee

Before we get too carried away with visions of bright young things tapping away at their laptops in tropical climes, it is important to draw a distinction between the Digital Nomad and what we at UP THERE, EVERYWHERE call the Digital ‘E-ployee’.

Put simply, a digital nomad is a wanderer who can travel and work anywhere s/he likes. Generally speaking, they tend to be:

By contrast, what I term the Digital E-ployee tends to be:

So, if you consult your field-guide to digital beasts, you’ll see they are very different animals.

Remote work in general is on the rise. Even corporate leviathans wedded to the old idea of working in one place are starting to come around to the idea, partly because it allows to work with those they would not ordinarily have access to and partly because it is popular among employees.

What’s more, it increases productivity. According to a Gallup poll, remote workers were equally as engaged as employees who only worked in the office. The engagement sweet spot, as it were, was to be found in employees who spent 60 to 80 per cent of the time working remotely, a stat which might well raise an eyebrow in some quarters.

How digital nomads and e-ployees can benefit your place

You may well ask:  while remote working makes sense both for employee and employer, what if anything does the digital nomad bring to the table?

As a rule, digital nomads look for places which are cheap by Western standards. Thailand and Bali are the classic examples. Their popularity has been a mixed blessing: although co-working spaces are much in demand, property prices have risen sharply.

Few digital nomads give back to the countries in which they live. This raises the question: is it ethical for people from developed countries to exploit developing ones in this fashion?

E-ployees arguably bring greater benefits. For one thing, they don’t move around as much. For another, they tend to gravitate to cities such as London, New York and Barcelona.

Being perceived as a top destination for the e-ployees can only be a good thing for your city, town or village. But how do you attract mobile talent?

What makes your city attractive for remote workers

Geography matters to e-ployees and digital nomads alike and although the single most important prerequisite to working remotely is a reliable and high-speed Internet connection, there are other factors to consider:

Some cities lend themselves to this peripatetic way of life more than others, as we will see in my next blog.