Brexit And Its Implications: View From India 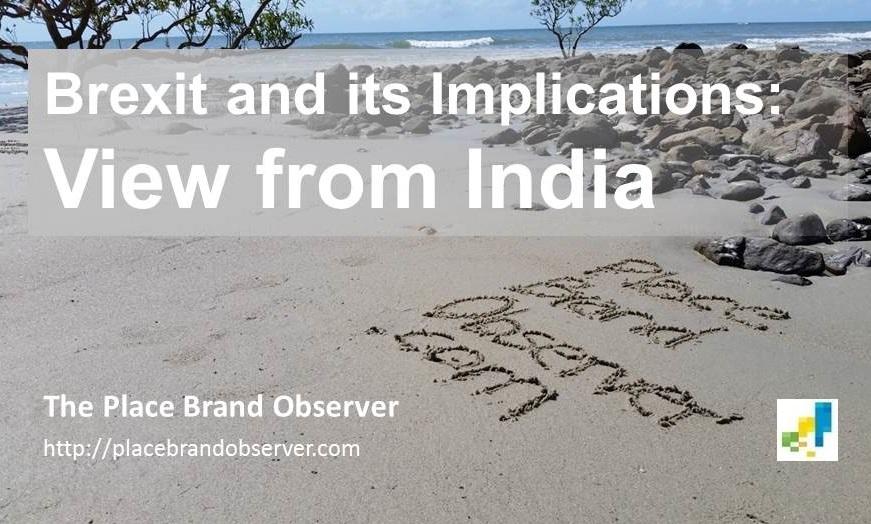 In recent times, the world has had to contend with events which time and again have demonstrated how globally interconnected and interdependent we are.  BREXIT is yet another example – a historic verdict that drowned the world in a din of reactions, indices destabilized, markets plunged and credit rating agencies pronounced judgement on the United Kingdom.

The sounds of regrets on the results of the referendum have been louder than the expectant jubilation of the 52% that cast its vote to Leave the European Union. Moody’s cut the UK’s credit rating outlook to negative; Fitch downgraded its rating from AA+ to AA forecasting an “abrupt slowdown in growth in the short term.” Simultaneously, S&P’s statement that the Leave result could weaken “the predictability, stability and effectiveness of policymaking in the UK” aggregately mirrored the state of affairs unfolding in the UK. Additionally, The Economist aptly titled its article: Britain is sailing into a storm with no one at the wheel!

Well, there are too many entangled threads, which would need to be unravelled and straightened: an exit plan, the post scenario, redefining the future with the EU, with singular countries, in other regional groupings……a constitutional decision and much to deal with in the aftermath.

The ripple effect that Brexit could unleash within Europe is a new concern, with Nexit (Netherlands) and Frexit (France) being the next expressed sentiments. It is equally worrisome to see trending conversations like – Brexit: the best thing that could happen to Holland – which lays bare the frailties and, if left unbridled, could kindle worrisome trends.

At home in India, the country was barely recovering from REXIT. Popularly referred to in the Indian media, Rexit was a sudden exit plan announced by Raghuram Rajan, the RBI (central bank of India) Governor. Placing this in context of events, Rexit took place barely days before Brexit. Frankly though, the reactions to an articulate and brilliant Governor Rajan’s exit announcement were probably more vociferous and opinions far more expressed in India than what can be seen in the news surrounding Brexit. Markets reacted with the same volatility to the two stories, but probably more sharply to the former.

The Indian Government has expressed confidence that the Indian economy with its strong macroeconomic fundamentals would not suffer long term impact.

According to Morgan Stanley Inc., India’s economy is expected to be the least impacted in Asia by Brexit due to the relatively low trade exposure. However, Indian exporters do foresee short term impact due to currency fluctuations and global stock market volatility.

There are the obvious express concerns in Indian businesses like Infosys, Tata, Wipro and many more in view of large investments made seeking UK as its Gateway to Europe. India is the third largest investor in the UK. About 800,000 Indian companies are present in the UK, employing more than 100,000 people.

The abrupt Brexit development ushers in an environment of uncertainty, which would certainly hurt revenues of companies with exposure in the UK. Indeed, the Indian software industry with large commitments in the UK and Europe is bound to be impacted.

However, there are more serious concerns on what could be the evolving market scenario in the UK and urgency for clarity on the new rules of the game relating to movement of goods and professionals vis-à-vis UK and Europe. While clarity on the subject will take time to sort out, companies are waiting, drawn into boardroom discussions to ponder over redefining business strategies. Operations and profits are bound to be affected in the wake of continued uncertainty.

The contours of the Foreign Trade Agreement between India and the EU  – a discussion since 2007 – would now need to be revisited with the UK’s exit. However, the UK must first come to grips with its own situation before any new conversations can start.

In fact, at this juncture as I pen this article barely four days from the Brexit announcement, it may be too naïve to try and hazard a guess on the shape of things to come. Policy and business in India like elsewhere will need to adapt and respond to the new world realities.

It can be easily surmised that business is driven by profits and for its market sheen to persist, Brand UK will need to reinforce faith. Little would it have imagined that its Great Britain campaign would be put to test, so soon and by its own people! It captured all but failed to sense the turmoil in the nation brand.

From India’s perspective, Brand UK represents, to put it simply, far more familiar territory. A long history runs through the relations between both countries. It is the result of this long relationship which has contributed to a firm foundation in the partnership between the two nations within a more modern day context.

Today, the UK is home to more than a million Indians, making them the largest ethnic community in the country. The richest person in the UK is an Indian and there are many Indian business conglomerates that are bracketed in the list.

Studies suggest that the lowest poverty rates exist among the British Indian community, second only to White Britons. Indians have become a part of the social and cultural fabric of the UK, holding elite professional managerial positions. Even in our meals, we can see how dishes like the famed chicken tikka masala can bind communities across the UK.

For Indian students, the UK has been the preferred choice for admission into elite educational institutions. Cricket frenzy is yet another cultural strand that brings the two nations closer together.

Films are another case in point. While many Bollywood films have been shot in the UK, many British films, dramas and documentaries featuring Indian talent, have been hugely popular in India. The brand strands and affinities that connect the two are probably endless and run deep. Would these lose sheen with Brexit? The answer would be unlikely!

India, the crowning glory of the erstwhile British empire, is today recognized amongst the preferred business destinations the world over, including the UK, which has been quick to recognize Advantage India in the context of India’s talent, its English speaking population, IT leadership, market size, entrepreneurial zeal and the opportunities it offers to foreign businesses across sectors.

With the kind of commitment Indian business has brought to the UK market, it is unlikely the UK market would arrest the momentum and dynamic partnership built over years. India’s investments have also been on the rise in the UK. While Indian IT successes and the diversified Tata investments like the Jaguar are well recognized, a larger number of small and medium enterprises from India have been enthused by the UK market to largely access it as a gateway to Europe. British hi-tech expertise, advanced engineering and hi-end advanced services also interest Indian industry.

While tradition and historical familiarity may lend added sinews to partnerships, present day politics and policies are shaped by people and priorities of nations – something which has been so resoundingly highlighted by Brexit.

So what changes for India and UK post Brexit? The UK has much more to navigate as it shapes its new future taking its people along, engaging with Scotland and Northern Ireland, contending with the voices in Europe, building new bridges with the EU and defining new agreements singularly with individual countries at large, and so much more…

For India, Brexit presents an opportunity to directly engage with a country and not via a regional grouping. Traditional familiarities between the two nation brands should lend strength, as new understandings are reached but cannot be the overwhelming guiding priorities. In other words, it should be business as usual.