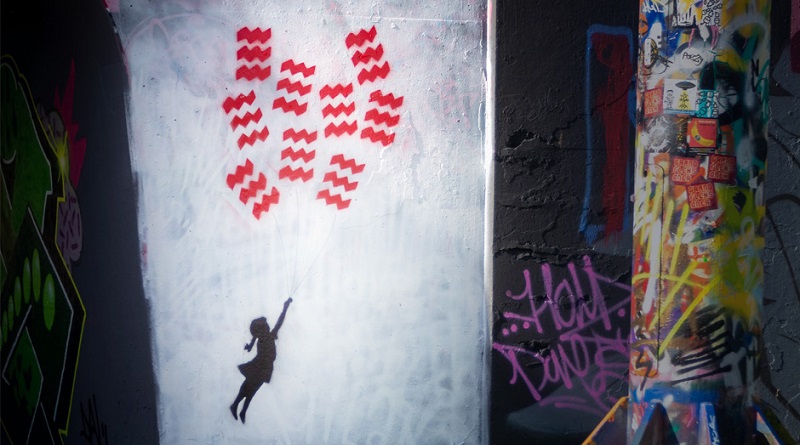 Eindhoven: how does the Dutch municipality use city branding strategies for its economic development and to increase the self-esteem of its community? Peter Kentie, Managing Director of Eindhoven 365, reports.

Why a place branding strategy for Eindhoven?

The ambitious city of Eindhoven in the Netherlands aims to become one of world’s top creative innovation regions. To achieve this goal, a long-term strategy was formulated to market the city and region to 1) attract top talent working in high tech and design, 2) to increase foreign direct investment, and 3) to encourage technology enterprises and research institutes to come to Eindhoven.

The global competition for talent is fierce and Eindhoven is a relatively small city. So, making the world curious about Eindhoven as a great place to work and live is essential for its ability to attract tech and design talent.

Moreover, the place branding strategy aims to raise the self-esteem of our inhabitants.

Eindhoven’s focus on place branding started in 2009. Back then, the city struggled with its identity: or rather, the lack thereof. A period which was tainted by the aftermath of the Lehman Brothers collapse and the effects on the global, but also local economies. The high-tech and design industries were struck severely, which was felt in the city’s economy and, as a consequence, the well-being of the residents.

Eindhoven was trying to find answers, to change the tide. Not just to mend things, rather to make a significant leap forward, focusing on strengthening the economy as well as the community’s self-esteem. So, the city management formulated the ambition to be the European leader of creative innovation by 2020. A program and management structure was created to work on this and to invest in the image and reputation of the city of Eindhoven.

Instead of going straight for the short-term solution, Eindhoven started with an extensive research into the perception and appreciation of the city’s image, internally and externally. The citizens were involved in expressing their ambitions through the use of Digipanel, which represents over 5,000 inhabitants.

Of course, there were predictable answers like, proper shopping facilities, safety, and a good climate for living, working, sports, and culture. But there were also surprising findings, especially that the inhabitants of Eindhoven saw their city capable of developing into a bedrock of technology, knowledge, and design – fields that were already considered strengths.

By using the citizens’ opinion, we proofed that the brand pillars are deeply rooted in our city and matter to our community. The city council also unanimously voted for a focus on these three domains as brand pillars, which were to guide the marketing strategy. 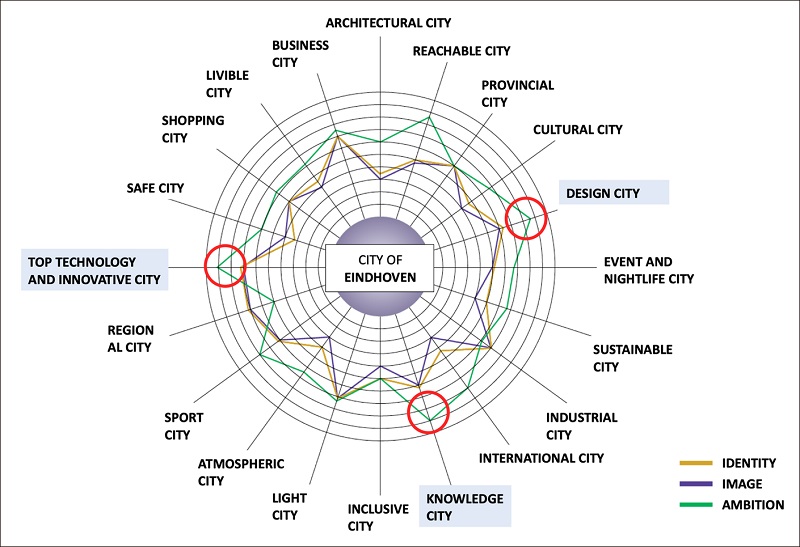 The Eindhoven approach to city branding and marketing:

Managed by Eindhoven365, the place branding strategy of Eindhoven covers a ten-year period. The mid-term evaluation took place in 2017. Eindhoven365 is an organization separate from municipal authorities but with close ties and reporting to the councillor responsible for city marketing, leisure and events. The place branding and marketing project name is fittingly: ”He who chooses, will be chosen.”

Creating a visual identity with your own best creative talent and together co-creating it for the city and municipality seems logical. But it is hardly ever done.

What stood out was the choice of a single brand visual, based on open-source principles and no manual! Many cities have both a council logo and a city marketing logo. Eindhoven decided – influenced by Antwerp in Belgium and Bonn in Germany – to create only one logo and – adaptable – visual identity.

The logo for Eindhoven was developed by a ‘virtual design agency’ in 2013. Eindhoven’s fifteen best designers, hailing from different disciplines like graphic design, architecture, fashion, industrial design, were asked – and paid – for their vision of Eindhoven.

Next, a core team of these designers was asked to develop a basic identity, based on the input from the first round. And they were asked to work together, which proved rather challenging for individuals who usually work alone!

The visual identity for Eindhoven had to comprise four elements: a logo, a fitting typography (based on duct tape), a photography style and a textually distinctive tone of voice.

Deliberately no slogan, or anything slogan-like, but visuals which can support campaigns targeted at specific audiences.

Central during the identity development was the ‘Magician’, the Jung-based archetype for challenge, change, vision, and inspiration, which fits beautifully the city’s unique energy to continuously reinvent itself. This led to the discovery of the logo: three ‘zigzags’ stacked on top of each other, or the ‘vibe’ as it is called today.

It was clear to us right from the start that the logo should have its own defined and monumental form. A strong identifier not based on likeability but on effectiveness. If you see it once, you won’t forget it. If a visual style relies on just a few elements, those individual elements must be extremely powerful and adaptable. Together they form the ‘Eindhoven’ visual brand identity and so provide playfulness and leeway for creating relevant pronouncements and campaigns. And, of course, to make possible top-quality merchandising and use in graffiti and even tattoos!

Free for all to use

The choice to create a single logo for the council and city marketing appears even more radical considering that everyone in the city and region is free to use the logo as they like: citizens, institutions and companies alike. Even using the logo to make money with merchandising, for example, is permitted, as long as the basic form of the logo is kept intact. There is just one limitation: the colour red is reserved for official council use.

Eindhoven’s visual identity is now celebrating its fifth year and going from strength to strength. Residents, businesses and creatives frequently use the logo, providing living proof of its seamless integration with the creative, local mentality of Eindhoven – a city continuously in search of inspiration and innovation.

Our main strategy for earning media coverage is to ‘tell and market the story of the city’ through influencers and by using social media. In the future we will target especially ‘Bright talents’, ‘Tech starters’ and ‘City Explorers’. Attracting businesses and investors is the secondary marketing focus.

We use temporary urban interventions in public spaces as tools for this, together with on-brand events, use of big data analysis and availability of services with high tech appeal in the inner city.

Bringing the city brand pillars to life in a day to day setting is key.

For example – Eindhoven is a city of design. Design is deeply rooted in our community and we have respected design institutions, like the Design Academy Eindhoven and Philips Design. Every year we celebrate design in Eindhoven with our Dutch Design Week, attracting over one thousand national and international journalists, including the likes of Wallpaper, Monocle, Wired, Damn, NYT, Fame, etc.

Another example of how we communicate the city brand: we started a video campaign titled #Sharethevibe where creative talent in the city can show off their capabilities by being promoted on city marketing media channels and on our inner-city video screens. We present our bright talents and tech leaders in 36,5 second videos. Below an example:

More about the concept and the videos here. Because of the significant exposure, those videos have become a great challenge and opportunity for Eindhoven’s creative community to participate in.

The most visible results of the Eindhoven place branding strategy:

To support our work and demonstrate results, we use NPS (Net Promoter Score).

In terms of increasing self-esteem of our community, we have had strong support of our focusing on Technology, Design and Knowledge as brand pillars. That said, we still tend to cheer with our hands in our pockets, so it is key that we let others do the cheering for us!

The philosophy behind our work is to think unconventional, create energy. And to stick to the chosen strategy, execute it smartly with the limited financial resources available, and to measure impact well.

Size does not matter. We believe in Eindhoven that smaller cities, say third tier cities of a country, now have the strongest momentum. They have the right scale for being liveable and enjoyable, no gentrification issues, and are keen to challenge the big cities by offering a better work/life balance. A bit like the small dog barking at the big one: who cares that your small, if you act big and audacious. That is what Eindhoven did and now it is reaping the rewards.

Key factors for success of our city branding work in Eindhoven proved to be strong and persistent leadership, combined with the broad support of citizens and politicians.

Our way of working is of course transferable to other communities. If there is a strong ambition and a willingness ‘to not go with the flow’, we think that our approach can be used to benefit other communities. Sharing our knowledge and lessons learned at conferences and online, such as here at The Place Brand Observer, is vital for us too. It fits our style.

Many cities that underwent the transition from industrial to high tech and service economy can gain from our experiences.

Focus on what you are good at, stick to that focus, create strong support among inhabitants and politicians for the program and make clear and concise choices. Based on what you are, being authentic and geared towards a future for your society as a whole.

More information about the city of Eindhoven here and about Eindhoven 365 here. Connect with Peter Kentie via LinkedIn or follow him on Twitter.

Enjoyed this contribution by Peter Kentie on how the Dutch city of Eindhoven is using city branding to increase its economy and community self-esteem? Spread the word! More place branding case studies and examples here.