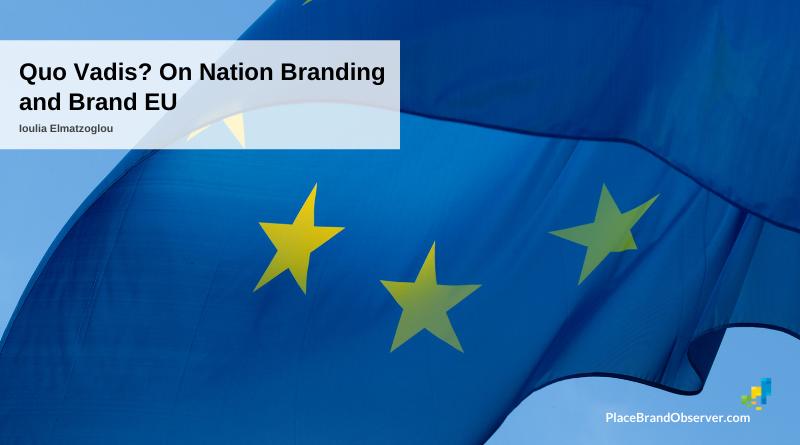 Ioulia Elmatzoglou shares insights from her research into the communication strategy adopted by the EU to improve its image in the minds of its citizens, which were recently published in the Journal of Place Branding and Public Diplomacy. She explains how the EU incorporated elements from nation branding practice, particularly storytelling, to resonate with the audience at an emotional level and to inspire a change, instead of using data and facts.

Ioulia is the Press & Communication Officer at the General Secretariat for Public Diplomacy, Ministry of Foreign Affairs Greece. Her research also won the best paper award at the 2019 conference of the International Place Branding Association in Volos, Greece. Her below answers reflect her personal opinion.

Ioulia, you recently published an article on the branding of the European Union. What brought you to investigate this topic?

After the outburst of major crises such as the economic crisis, the migration crisis, Brexit etc., a significant decrease in citizen trust towards the EU was observed. So, the EU to reverse this trend started to be more interested in targeting the hearts of people rather than their minds.

In the last European Parliament elections, the EU campaign was more focused on human stories, values and emotions using social media and adjusting its content to every EU country to directly approach European citizens. It is worth mentioning that the main video of the electoral campaign with the title “Choose the Europe you want me to grow up in” was a shocking one, causing a vivid debate on social media that really surprised me. Besides, this topic was a welcome challenge for me as I had the opportunity to combine my two academic fields of study – Communication and European Studies.

Which are the main insights from your research?

As the communication of the EU started to transform, focusing on elements such as storytelling and narratives, it started to resemble a branding strategy, and more precisely showed similarities to nation branding. In my research, I conducted a comparative analysis between nation and EU branding, aiming to display any similarities, particularities or constraints the EU presents regarding branding issues. According to my analysis, the new communication strategy of the EU has many similarities with nation branding as it uses elements such as storytelling, narratives, messages, values etc. to enhance its reputation.

The particularities though of the EU as a sui generis political entity (remarkable cultural, economic and social diversity between member states, a complex multi-level EU governance and a variety of actors involved in the regional, national and EU level) hinder EU efforts to promote a clear brand for itself.

On the other hand, the emotional and non-technocratic campaign for the European Parliament elections attracted the interest of citizens and generated a vivid debate on social media. Though, a separate study is needed to say if this increased interest was the result of EU branding efforts or if it was just the result of the political polarisation in EU countries at the time.

To what extent can nation branding support EU efforts to enhance its image and reputation, especially after Brexit?

As I mentioned before, the sui generis character of the EU hampers the efforts of the Union to promote a clear and strong image of itself, an element that is crucial for successful nation branding. EU citizens, national governments, EU institutions, all these actors have different perspectives about the EU that are influenced by their cultural, historical or economic background and of course by their own interests.

At the same time, the EU is a very complex entity regarding its decision-making system, while its policies are very often the result of painful negotiations and compromises. It is not surprising that the EU finds it difficult to disseminate to citizens a clear idea about its “raison d’être.”

Brexit, on the other hand, was an unexpected and shocking event, breaking for the first time the taboo of a country leaving the EU. It can be argued that, in the beginning, Brexit severely damaged EU reputation. But after the difficulties concerning Brexit negotiations and the uncertainty that such an agreement may bring, it seems that exiting the EU is becoming a less attractive choice for other EU member states. Of course, nobody can predict the future.

How has the EU “brand” communication changed or evolved over recent years?

The EU used to conduct one-way information campaigns, which were gradually transformed into a more participatory communication model around the mid-2000s. The aim was to establish a connection with European citizens, initiating a dialogue about their needs and expectations to gain their approval and the necessary legitimacy to enhance the European project.

In fact, these efforts did not bear any fruit as the EU image and trust in the EU seemed to decrease, according to public opinion polls. The next step to the EU communication strategy was to enhance the EU image and reputation adopting techniques and practices such as narratives, storytelling and messages. Instead of disseminating rational information about the EU with facts and figures, the new communication strategy aims to win people’s hearts gaining their emotional engagement.

The new narrative describes an EU “that delivers, that empowers and that protects”, using a simpler and a more popular language, storytelling with a human angle to invoke people’s emotions. Also, and in conformity with the “one-voice principle” this corporate approach is suggested to all EU institutions when communicating EU benefits and achievements.

The coronavirus pandemic has brought the nation state(s) back into the centre of political focus. How relevant is the EU in this context?

It is true that when the coronavirus pandemic broke out, nation states were the first actors that responded and took action to fight against this tremendous health crisis. We witnessed border closures, travel and mobility restrictions and even controls in medical supplies exports to protect national interests.

It is totally understandable in such urgent situations to return to what we know, to take refuge in what is more familiar and closer to us. The EU, on the other hand, did not react as fast as it was needed, but we have to admit that it has now advanced towards measures that can significantly help member states to handle the several impacts of the coronavirus pandemic.

The EU Recovery Plan providing important financial support, the SURE instrument to help member states protect jobs or the EU vaccine strategy ensuring access to vaccines for all EU member states – all these are steps in the right direction providing a safety net in difficult and urgent situations. Global crises, such as the coronavirus pandemic, require cooperation and solidarity, not only in the EU but also at a global level, instead of national solutions and isolation.

Which are the main dangers and pitfalls for regions – including the EU – linked to using place branding as part of their strategy to enhance their reputation?

I think the main danger is to put more emphasis on logos and slogans and top-down marketing strategies, rather than trying to formulate policies and take decisions based on citizen’s needs and expectations.

Another pitfall is to consider that place branding refers only to tourism marketing, while it has also to do with promoting the image of a place and why it is worth living, working, investing there. And that’s where another pitfall is hidden. The promotion of such an image needs to be part of a wider development strategy and sustainable policies. And this applies to cities, regions, nations as well as the EU as region.

Which trends do you observe in Europe, how countries approach nation branding?

Usually, countries are trying to show how great or greater they are than other countries and that they perform well in a series of indexes to attract tourists, investments and enhance their international reputation.

I think that countries in Europe are gradually starting to realise also the importance of collaborating with citizens and all stakeholders when building their brand, emphasising the engagement of people. They are trying to go beyond how great or how unique their country is, trying to connect, collaborate and share.

In recent years, new perspectives have been added to place and nation branding by distinguished practitioners and academics in their recently published books.

This discourse surely contributes to the evolution of nation branding towards a more engaging and collaborative model.

An interesting example are “The Nordics”, a unified branding of the Nordic countries in Europe that is not about asserting their “superior culture, wonderful nature and creativity” as it is mentioned in their website, but it is about “inviting and inspiring, about conversation and cooperation”. I think that this summarizes the new approach of nation branding very well.

Which topics linked to nation branding, the EU, public diplomacy or reputation management would you consider important to address in future research?

It would be interesting to study the role of citizens and stakeholders at the formulation of place or nation branding, to look at the mechanisms that can make them participate and see how their opinion can be taken into account when shaping a place branding strategy.

It would be also interesting to examine the role of online digital communication, but also reevaluate offline communication with people as part of place or nation branding efforts.

More about the study here.

The views and opinions expressed in the interview are personal.

Place Branding and Public Diplomacy is the first and only journal to concentrate on the practice of applying brand strategy and other marketing techniques and disciplines to the economic, social, political and cultural development of cities, regions and countries. Edited by Robert Govers and James Pamment.

Did you enjoy this research update on how nation branding practice is changing, and how it is used to support the image and brand of the European Union? Thanks for sharing!