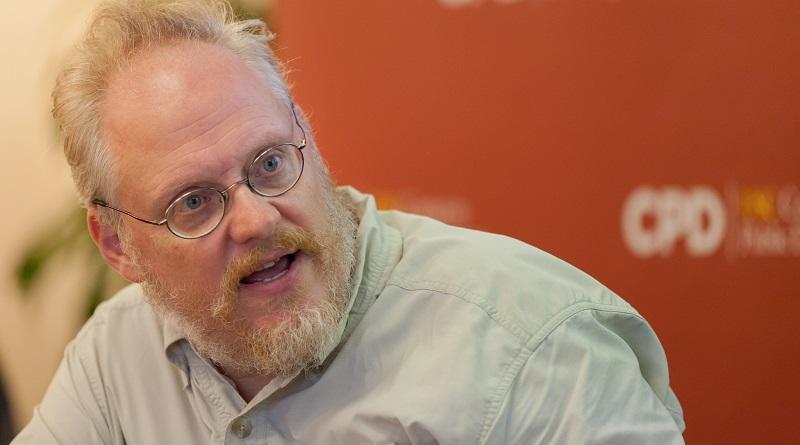 Following our research insight and case study on the public diplomacy strategy of Catalonia as stateless nation, today we’d like to introduce you to Nicholas (Nick) Cull, Professor of Public Diplomacy at the University of Southern California, Annenberg. Nick has been at the forefront of public diplomacy research and teaching for many years and, together with Robert Govers, edits the academic journal Place Branding and Public Diplomacy.

Nick, do you remember the first time you heard about public diplomacy?

I was born in 1964 and grew up in the UK. As long as I can remember, I was fascinated by both the broadcast media and international affairs.

Even as a child I was aware that the memories and political experiences of my family members were not always in step with the dominant story of the British government or press let alone the picture of the world presented by Hollywood, and the word ‘propaganda’ soon loomed large as a catch-all description of the maze of overlaps and disconnects between the media and international relations.

Specifically I was fascinated by the US government’s spinning of the Bicentennial in 1976, by the discrepancies between BBC news broadcasts for foreign and domestic audiences during the Falklands War of 1982, and – in my own life – by the power of personal interaction with people from elsewhere in Europe, whom I met during summer holidays on a farm in Denmark. All of these experiences touch on the field of public diplomacy.

I was fortunate that when seeking a chance to study international history at degree level I found a wonderful program at the University of Leeds, where a small group of historians led by Nicholas Pronay and Philip M. Taylor were studying propaganda.

I began working in earnest on what I now recognize as public diplomacy, rather than propaganda, in 1985, when I began a research project on the ways in which the British Ambassador to the US during the war – Lord Halifax – worked to rebuild a tarnished personal image and to become a valuable player in Britain’s outreach to the American public.

My PhD, also at Leeds (under Taylor), looked at the whole story of Britain’s communication battle to overcome American isolationism before Pearl Harbor. Looking back on that work, it amazes me how many staples of contemporary public diplomacy and place branding were on display in this period under a different umbrella title.

My focus shifted in the process from propaganda to public diplomacy. I find it helpful to look at the differences between the two and stress this when introducing the subject to students and diplomatic trainees.

I knew the term public diplomacy from the late 1980s onwards, but didn’t think of myself explicitly as a public diplomacy scholar until 1995, when I began my history of the United States Information Agency.

I remember the USIA veteran Hans ‘Tom’ Tuch giving me an early masterclass in the use of the term during an oral history interview.

How has your view on public diplomacy changed over the years?

<p”>When I began thinking about the field as a student in 1985, I was drawn to the idea of mastering some kind of alchemy to turn the base metal of unformed public opinion into the gold of a fully mobilized and committed movement.

I no longer see public diplomacy this way. I think it is better understood as a process of bringing the public dimension into foreign policy formation and practice — and getting better policies and better relationships as a result.

Public diplomacy is the process of bringing the public dimension into foreign policy formation and practice – and getting better policies and better relationships as a result.

How does public diplomacy relate to the concept of nation branding?

I see nation branding as one of the most important tools of contemporary public diplomacy. I do classes specifically on nation branding in both my regular Cultural Diplomacy class and the summer class I teach to professional diplomats through USC’s Center on Public Diplomacy.

Like public diplomacy, nation branding relies on a foundation of listening.

Interestingly, the concept of nation branding has added a domestic dimension to public diplomacy, as the best branding campaigns require listening at home as well as overseas, and sometimes that leads to communications interventions at home to ‘maintain the quality of the brand.’

Your key insights so far as Professor of Public Diplomacy at the University of Southern California (Annenberg)?

It has been one of my great privileges to have spent the last ten years launching and running the world’s first public diplomacy master’s degree at USC.

The quality of the students admitted to that program each year is amazing. They come from around the world and with a range of life experiences but share a conviction that better communication can make the world a better place.

I was surprised by how many of the students were not seeking jobs in government service but rather wanted to work in non-governmental communications, so one insight would be the extent to which PD is moving beyond the state to be a practice of regions, cities and any group with a reason to engage international opinion.

How important is public diplomacy in the 21st century for national but also regional or local governments?

I was struck by Simon Anholt’s remark at the COP 16 climate summit in Cancun back in 2010, that there was only one super-power left on the planet – public opinion – and feel that fact alone means that public diplomacy must be central to the practice of international relations for the century ahead.

I see more players coming into the mix every year and consider cities and regions as among the most significant of these. I’ve been involved in the project to establish a global parliament of mayors, which is part of this process.

Your thoughts on the various country and nation brand rankings out there – good or bad? Which ones do you find most useful and relevant?

To be honest, I rely on the Anholt-Gfk Nation Brands Index. I’ve worked with Simon Anholt over the years and trust his methodology. I think there is a special value in having such an immense data series.

I am a little shocked by the number of competitors springing up – some of which seem mysteriously related to consultancies promising to change a country’s standing in the rankings.

Of the others, I enjoy the Monocle index because it is so well presented, even if the methodology is open to question.

Your thoughts on the Good Country Index?

I am most impressed by the Good Country Index as a way to encourage countries to contribute to the global commons. I think that its founding insight – that people around the world are more impressed by good countries than strong or rich countries – is profound.

I’ve been fascinated by the way in which the index has teased out ‘good’, which other indices had missed and revealed under-performance in some who assume they are #1. I certainly use it in my teaching.

In your view, what does the future of public diplomacy look like?

I think that the future of public diplomacy lies in collaboration. No single player is rich enough or credible enough to ‘go it alone’ as the US or the USSR could do in the Cold War. Today, actors need to arrange coalitions and partnerships around issues.

While coalition has happened in the past – the anti-Apartheid network of the 1970s and 80s is especially instructive – I see partnerships around issues as the dominant mode of operation in the 21st century. Partners will include state, regional, commercial and NGO voices.

Your favorite public diplomacy books at the moment?

It is great to see the field evolving. Of books in print, I commend Martha Bayles’ book Through a Screen Darkly, which opens the whole issue of how the media is damaging US public diplomacy.

As an academic I am often asked to read books in preparation and my two favorite books of this year are both PhD thesis by students from the program at which my own work began at the University of Leeds: Caitlin Schindler’s book on the pre-history of US public diplomacy and Molly Bettie’s take on the evolution of the Fulbright program.

I also enjoyed a new book by Sarah Ellen Graham of University of Sydney on the progressive origins of US public diplomacy, which is due out from Ashgate later this year.

List of books by Nicholas J Cull on Amazon

Enjoyed our interview with Nicholas (Nick) Cull on nation branding and public diplomacy? Spread the word!