A Systemic Analysis of Overtourism and Tourismophobia: And What Destinations Can Do About It 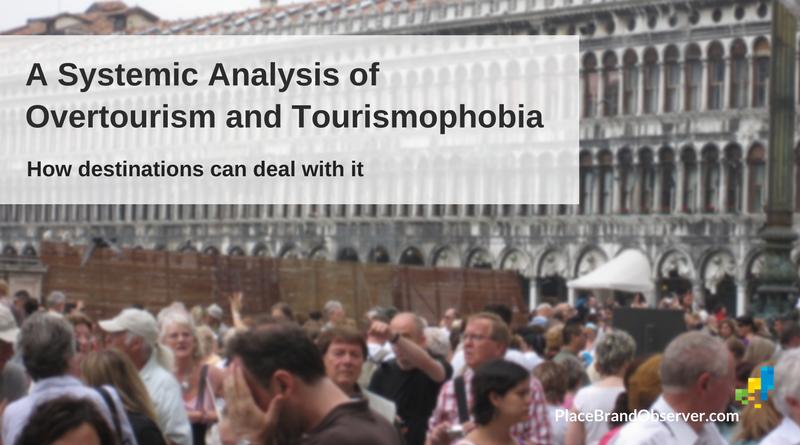 In my last contribution as Observer, I analyzed the root causes of undertourism and imagined some remedies. This time around, I am going to focus on undertourism’s evil sibling: overtourism.

The two terms “overtourism,” and “tourismophobia” are used interchangeably by many experts. While those two problems are related, they are not exactly the same. Therefore they deserve to be imagined separately.

“Problems are simply the dense outer shell in which fantasies are wrapped,” says James Hillman. Now, let’s peel those layers one by one.

Anyone who has been to Venice since the 80’s has most likely experienced overtourism first hand. That said, to be able to appreciate the true nature of the problem, we must first acknowledge that tourism industry is a complex adaptive system. Consequently, it is not possible to predict how a particular action would create a reaction.

For instance, the policymakers of Amsterdam, a city that sorely suffers from overtourism, consider radical measures to limit the number of tourists visiting the city. Such an approach could very well channel certain less-desirable types of tourists to other destinations.

On the other hand, the same travel restrictions could make Amsterdam even more appealing to some, for the more scarce a resource, the more valuable it becomes. As the saying goes, the heart always wants what it cannot have.

While we cannot predict the future of a complex adaptive system, we can nonetheless identify some common patterns of problematic behavior. In scientific literature such patterns are known as system archetypes and, historically, three of them have been fuelling the phenomenon we call overtourism.

The first one is called Success to Successful. Simply put, the places that ate “first and more often” got bigger. All places started out equal – not unlike players in the game of Monopoly. Over time some cities attracted more visitors, which gave them the incentive to build more tourist attractions, which in return further widened the gap between them and their competitors.

Also, thanks to the advent of modern media and movies, they solidified their place in the minds of global travellers, becoming mental shortcuts – or availability heuristic, as cognitive psychologists call them. This archetype, which systematically rewards the winner is the driving force behind the overtourism phenomenon.

While a city’s hands are tied regarding success to successful pattern, at the regional or country level there is a solution, and that is called diversification.

Take Turkey for instance. Antalya and Istanbul are two of the world’s most popular tourist destinations. Despite both of them are near their limits to growth, more and more attractions are being built in those cities. To make matters worse, Tourism Turkey still heavily promote the two destinations.

By creating alternative tourism hubs, however, policymakers could ease the load on those cities’ shoulders, for Turkey has no shortage of historical, natural, or gastronomical tourism assets. Clearly, that is a multi-faceted problem that far exceeds communications. One would need time and policies that level the playing field for infrastructure, and quality workforce.

The second archetype is called Seeking the Wrong Goals. Once set in motion, a system obediently works to produce self-replacing results. That’s why shifting the rules could create drastic consequences.

Historically, many destinations measured their success based on the number of tourists they attracted, not on the tourism receipts, let alone on the revenue per visitor. As you expect, those three goals would create entirely different systems.

Overtourism is the side-effect of the first one. The way out of this problem is by moving goals up the ladder.

That said, there are no pain-free remedies. Chances are the third one would not create a problem of overtourism – albeit it could very well cause tourismophobia, (wealthy and posh tourists tend to spike up prices), which we will get to in a minute.

Tragedy of the Commons

The last archetype is called Tragedy of the Commons, and it is by far the messiest one. To demonstrate, if fishers were allowed to fish whenever and wherever they wanted, soon they would overexploit the shared resource, leaving no fish for any angler. That’s why there are written and unwritten rules that prevent overfishing and protect fishers from their selfish motives.

Unlike in the example, though, the main problem with overtourism is that the aggravator of the problem (visitors) and the victim (local) are not the same people. Unless the visitors opt-in to be a part of the solution this problem cannot be resolved.

One such successful case is the Yellowstone Pledge. To protect the park from the uncontrolled access to the masses, the Yellowstone Park created a pledge that invites visitors to behave in a certain way. While the jury is out on if such a tactic would work for a city, it is nonetheless an idea worth entertaining.

Tourismophobia is not necessarily rooted in overtourism but in xenophobia, for locals often equally dislike the penny-pinching backpackers and squandering affluent visitors. Given the political landscape around the world, the fear of the other will strengthen going forward. Consequently, the global zeitgeist is inducing collective introversion, not extroversion.

The border walls – both literal and psychic – will most likely get higher, making xenophobia a nastier problem. That’s why tourismophobia – not overtourism – is the reputation trap.

After all, overtourism is an unpleasant sign of social proof. In the minds of visitors, a negative experience caused by overtourism (e.g., waiting 3 hours to go up the Eiffel Tower) would dissipate in a year. However, the mental residues of having been subjected to xenophobic behaviour would stay much longer, spread much faster, and possibly cause escalation.

Is there a way out of this? Yes. Time… The theory of Fourth Turning suggests that mood eras are cyclical. Things will likely take a turn for the worse over the next decade before getting better. In the meantime, the best a place could do is to galvanize its citizens around its genius loci, while trying to prevent local price hikes.