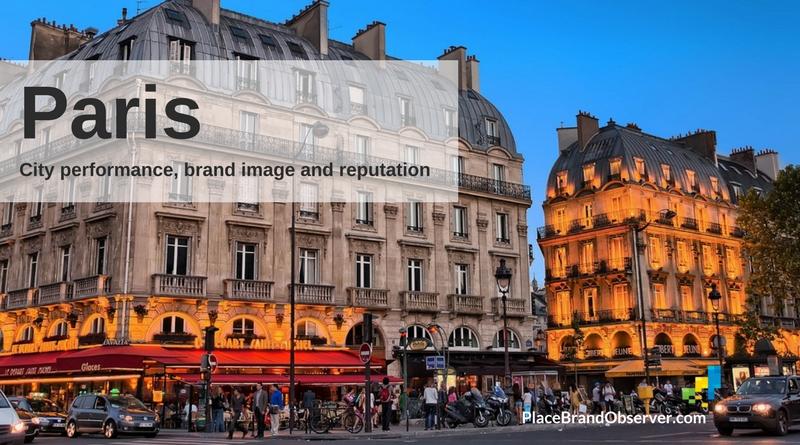 Paris: the French capital is one of the best-known cities and among the most popular tourist destinations worldwide. It has for centuries been a global reference for culture, travel, art, and commerce. Events such as the yearly Fashion Week or the COP21 in 2015 guarantee continued international attention.

However, Paris has also faced severely negative episodes in recent years due to repeated terrorist attacks (January and November 2015, among others). Does the city still enjoy a good brand image and performance? What do the different indices say about the reputation of Paris, its innovation capacity, business attractiveness, and sustainability?

How strong is the brand and reputation of Paris?

With a recently renovated image for the Paris Office du Tourisme, introduced in 2016, the city is betting on a more contemporary and less cliché feel for the French capital.

Paris retains its #1 spot in the 2017 Anholt-GFK Roper City Brand Index, which evaluates the power and appeal of a city’s image, with a narrow lead over London. This was possible thanks to its remarkable performance in international presence and quality of place, which refers to the physical outdoors aspect and transport.

However, in the 2018 City RepTrak®, a global index that measures the overall reputation of leading cities around the world, Paris ranked only 26th out of 56. Despite the French capital being the leader in terms of city awareness, several others outrank it for likeability, support, and loyalty, including Sydney, Copenhagen, and Vienna.

How innovative and influential is Paris?

Putting aside the influence Paris and France have been acquiring at a European and global level with Mr. Emmanuel Macron’s Presidency, the French capital has also been investing in infrastructure and innovation initiatives for a while. In 2019, the city ranked 3rd in the Global Cities Index, maintaining a decade-long dominance among the top three cities.

Surpassed only by New York and London, Paris is part of the global influence elite. Thanks to its recent improvements in economics (foreign direct investment, infrastructure, proliferation of business incubators) and governance, the city moved from 13th position in 2016 to 5th in 2019 in the Global Cities Outlook results.

In terms of innovation, Paris has maintained its role as Europe’s second-best hub for innovation. In 2019, it improved its ranking from the 9th position in 2018 to the 6th position in the 2019 Innovation Cities™ Index, which evaluates 500 cities across the world.

As for the Global Power City Index, which evaluates the appeal of cities through the eyes of global actors such as managers, researchers, artists, visitors, and residents, Paris ranked 4th out of 48 with a score of 1387.7/1800. It was placed after London, New York, and Tokyo. Accessibility (1st), livability (1st), and cultural interaction (3rd) are its most remarkable dimensions as measured by the index. Research and development (9th), economy (21st) and environment (24th) were the less performing ones.

Is Paris a sustainable city?

In terms of environment and sustainability, Paris still has a way to go. The city was ranked 15th in the 2018 Arcadis Sustainable Cities Index, which integrates the people (3rd), profit (18th), and planet (25th) dimensions into sustainability.

Likewise, the city was ranked only 10/30 in Europe, with a score of 73.21 by the Green Cities Index, which measures city performance through 30 indicators, including environmental governance, CO2 emissions, energy, buildings, transport, waste & land use, air quality, and water, among others.

Paris continues to reign in the 1st position in the XXL group (>1M inhabitants), according to the latest Cultural and Creative Cities Monitor: 2019 Edition. The city maintains its leadership in the ‘Creative Economy’ and ‘Cultural Vibrancy’ sub-indices for the second consecutive year.

Paris is considered one of the seven ‘ideal’ cultural and creative cities, as it leads in the following three (out of nine) measured dimensions: Local & International Connections, Human Capital & Education, and Creative & Knowledge-based Jobs.

It is also the only city where it would take  95% of its population less than 10 minutes to reach a cultural venue, illustrating how many cultural facilities Paris has.

Resonance Consultancy’s 2020 World’s Best Cities ranking puts Paris on a very high 3rd position. The French capital is in the very front of the index for Product (3rd), Promotion (3rd) and Programming (4th). The pillar of People, which assesses human capital, diversity, and education attainment, is evaluated much lower (37th) in the performance of Paris.

It will likely come as no surprise that Paris is considered very expensive to live in. This is stressed several times in the Nomad List’s ranking. In addition, the stereotype is testified that many Parisians lack the ability to speak English, leading to a low ranking and deserving a special mention in the list’s pros and cons section. Paris scores much better in most other categories, including ease of doing cashless payments. This is also what the country in general scores best in, according to the Digital Life Abroad report.

Paris is only ranked 48th out of 56 cities in the Digital Nomad Index. The city is only represented in a top 20 list twice: its start-up score and cafés with free Wi-Fi.

Unsurprisingly, Paris gets bad marks for cost of living, measured by the cost of a beer (49th). The average rental cost of a one-bedroom apartment is also considered high, compared to other cities around the world.

Is Paris a good place for doing business?

The French capital in 2018 accounted for 30.3% of France’s GDP (Paris Region: Key Figures 2018). In terms of ease of doing business, the city was ranked by the World Bank’s Doing Business study as 32nd out of 190, preceded by Copenhagen (Denmark), London (UK) and Oslo (Norway).

Trading across borders proved to be Paris’ best indicator (1st), whereas registering property was pointed out as the most complicated one (100th).

Enjoyed our summary of global rankings and indices on Paris’ economic performance, its sustainability, attractiveness for digital nomads, brand strength and reputation? Thanks for sharing!