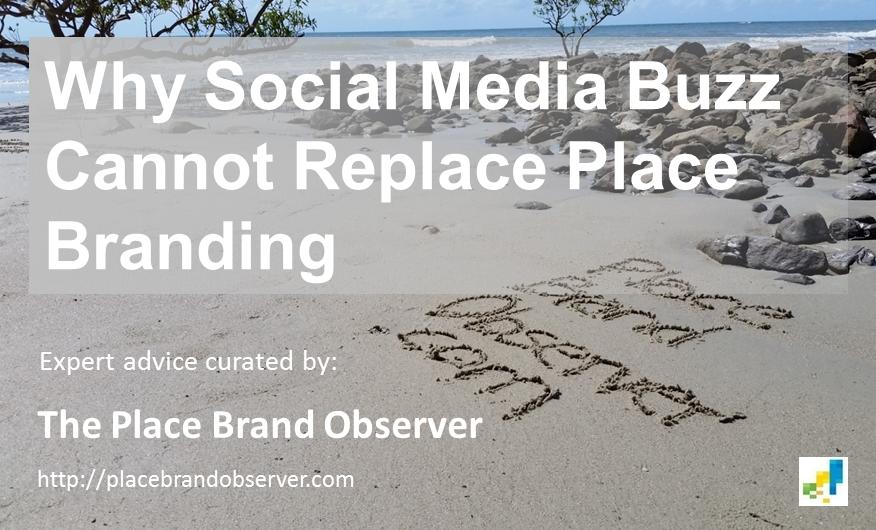 Back in 2013, Robert Govers published an interesting blog post on the now inactive Placebrandz website, in which he reflected on an exchange of ideas and arguments regarding social media and place branding that followed a conference. The post offered valuable insights, well worth sharing.

Earlier in 2013 I delivered a keynote speech at the Holland Marketing Congress, organised by @NBTC, @AmsterdamRAI and @HSMAI_NL about Nations as Brands, Competitive Identity and Brand Holland. In short, my argument was (as usual) that to consider places (nations, regions, cities) as brands is not about logos, slogans and advertising campaigns but about developing structures, systems and strategies that will enable places to coordinate, stimulate and co-create initiatives (policies, projects, investments) that are relevant, distinctive and meaningful (competitive) and fitting and authentic (identity) (i.e. Simon Anholt’s Competitive Identity).

In his presentation after the break, Rohit Talwar (@fastfuture) opined that nation branding is nonsense, referring to the national bragging commercials of countries advertising on CNN or BBC World, and that the ‘brands’ are just there so as to satisfy the consultants that design them.

If one defines place branding by its current popular practice (i.e. logos, slogans and ads) without referring to the rapidly expanding academic body of knowledge (such as in the quarterly journal of Place Branding and Public Diplomacy) or places that apply more thorough approaches (such as seen on The Place Brand Observer), then I agree with Rohit.

However, he dismissed the brand concept altogether arguing that in today’s age of social media, it is the bloggers and other active social media users that will build reputation. It was suggested, for instance, that if cities or countries want to build their culinary reputation they just have to invite food critics and bloggers to their restaurants.

Obviously, endorsements, reviews and positive buzz about a country’s economic offering is essential (place image is indeed largely built through consumption experience and ‘word-of-mouth/mouse’), but it is rather naïve to think that food-critics and bloggers will have a major impact on the overall international brand awareness and reputation of a country, particularly in the short term.

I tweeted that: “If you want bloggers/publics to “talk about you” you need to have stories that are interesting to share and that fit you”. @IrisHannema tweeted that this is rather obvious and she is right, but unfortunately, the obvious is often ignored. Also, I am not just talking micro-stories that generate immediate buzz, but also and particularly about the macro-story that consistently builds reputation over time.

‘Place branding’ should not primarily be about controlling design, packaging and messaging (as is often the focus in commercial branding), but about stimulating engagement.

The big global media advertising campaign logic is indeed built on outdated ideas of government propaganda where one can control the channel and the message. Luckily, those days are over, but it seems that some are applying the same logic to social media, i.e. assuming that there is any way in which one can control what bloggers and sharing consumers are saying about you and how that builds a macro-story.

Yes, the reputation of countries, cities and regions is, now more than ever, fully in the hands of citizens and global audiences, but it does not mean that one should not try to inspire, stimulate and facilitate consistent narratives.

If local public, private and civil society stakeholders were to ask themselves what their city, region or country is for – what its historic, present day and future contribution is to the world; the one thing it should be famous for; its defining purpose – it should result in a compelling, relevant, and meaningful narrative. Not a long list of achievements and things to brag about – which are often only relevant to locals and immediate neighbours – but looking for that underlying national story, the genius of the people, rooted in identity, where there is always a defining purpose to be found, which will guide public, private and civil society actors as an organising cross-sectoral principle that should enable places “to project an unbroken stream of dramatic evidence that will give them the reputation they deserve” (see the Free Preview Chapter in the International Place Branding Yearbook 2011).

So indeed, I agree with most of what Rohit said, that most of the current practice of nation branding propaganda is nonsense, but to look at places as brands and to devise a Competitive Identity programme is actually uniquely relevant in today’s age of social media.

Learn more about Robert Govers in our expert interview.