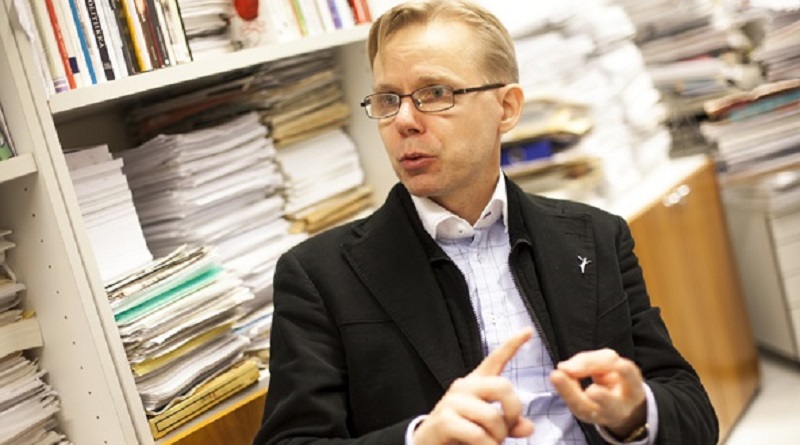 City branding as a strategic management tool for local governments to promote smart and creative urban development is the primary research interest of Ari-Veikko Anttiroiko, Adjunct Professor in Management at the University of Tampere in Finland.

In this interview, Ari-Veikko Anttiroiko shares insights from his recent book on the Political Economy of City Branding (Routledge, 2014) and explains why city branding is gaining importance in a globalized and mediatized world.

Ari-Veikko, a few words about your professional trajectory?

I started my work life in Finnish local government, which explains my interest in both strategic management of local government and place promotion. Yet, since my first year at university I have been interested in the contextual changes that condition the restructuring and adjustment processes of local governments, which seems to have affected my approach to city branding.

Before my academic career in the early 1980s, I studied marketing in a business college. However, I do not remember that branding would have been a big topic at that time. Even if marketing in local government was the topic of my Master’s thesis, it soon faded away from my research agenda, and stayed away for some twenty years. It re-emerged with my research on how local governments should cope with the challenge of increased global intercity competition.

It was Manuel Castells’ work on informational city that sparked my interest in contextual urban analysis, which helped to understand the conditions for local economic restructuring. I then drafted some papers on how cities compete with each other globally, and organised a joint session with Prof. Nicos Komninos on this theme for the Knowledge Cities Summit in Shenzhen in 2009. At that time I had finally taken branding on board, even though in a rather narrow sense as city brand equated with economic city profile.

My presentation in our session was ‘City Branding as a Response to Global Intercity Competition’. It attracted Routledge’s attention and as a result of our collaboration The Political Economy of City Branding was published in 2014.

For me the most interesting aspect of branding is the way it helps local governments to ‘engineer’ their economic restructuring and coping with the constantly changing – globalised, digitised and mediatised – environment. Branding is thus one way of looking at the connection between locality and its operational environment.

What motivated you to write The Political Economy of City Branding?

I cannot deny that an important factor was Routledge’s invitation to write a book about this topic. Beyond that, I am intrigued by how the context of local governments is changing and respectively how local governments should respond to such changes. Place branding is one crucial element in such a process, of which I simply wanted to know more.

Which are the key insights from the book?

First, one of the premises of the book is that we live in a world in which ‘urban attractiveness’ is becoming a key measure of success. This is known as City Attraction Hypothesis. It paints a picture of cities in a globalised “spiky world”, as convincingly described by Richard Florida in his seminal article ‘The World Is Spiky’ (The Atlantic, 2005). 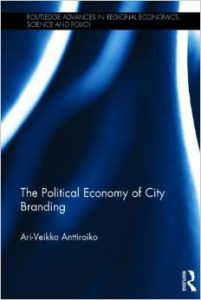 Cities have to learn to manage themselves as ‘hubs’ or economic dissipative structures in an increasingly fluid economy organised in the ‘space of flows’ – another concept invented by Manuel Castells. Branding is a tool to deal with such a demanding job.

Second, the discussion about ‘industrial city profiles’ emanates from the attraction imperative. The book claims that the decisions about which niches, industries or clusters to promote in the local economic development policy are critical to the success of cities since such decisions determine factually the key attributes of the city’s economic identity.

There is a critical connection between economic development policy and identity-driven brand building.

Third, such a branding endeavour takes place in a mediatized environment, as exemplified by the growing impact of city rankings on cities and their audiences. The book provides a fairly clear picture of how rankings serve as a snapshot of the symbolic battlefield of cities.

Fourth, apart from the previously discussed strategic and managerial aspects of city branding, the book emphasises the need to anchor such branding into the true strengths of the city in a process that is open and inclusive, in order to create a popular and resilient brand.

Lastly, we should do our best to avoid the birth of ‘brandocracy’ that reaps the benefits of collective symbolic capital to a small local elite. Rather, the idea should be to use city branding as a tool to create win-win situations in which the whole community benefits. Hence the idea of ‘open brand politics’.

As academic, what fascinates you about the place branding topic?

I am fascinated about “places” and their relationships with their various contexts. Branding is a crystallisation of many important aspects of the strategic adjustment of local governments. My starting point in such contextualisation has been Castells’ idea of the informational mode of development, driven by trends such as digitalisation, mediatisation and even immaterialisation of the economy.

From such contextual analysis there is a short way to the theory and practice of city branding. More than anything, place branding reflects the symbolisation of the economy, and provides inspiring perspective on a special category of cities’ assets: their collective symbolic capital.

This discussion is also closely linked to critical urban research, which has always inspired me.

We’ve noticed a lot of interest in place branding from Scandinavia – why is it so popular in Sweden and Denmark in particular?

One explanation might be the fact that all these countries are small open economies, relatively distant from the epicentres of global economy. We have learned to be responsive and think relationally. We regard national, regional and local development as an open, competitive setting, which tends to bring branding and other forms of “social engineering” into the picture.

Another factor that explains the situation in Sweden and Denmark in particular is their success with many commercial brands (IKEA and the like) and also proactive local governments, Stockholm as the primus inter pares, which have their impact on academic research.

In your view, which are the most pressing questions linked to city branding right now?

There has always been a puzzling relationship between the normative and descriptive/explanatory sides of marketing and branding, and this issue still requires basic research in the area of city branding. Within this umbrella, I am personally interested in the relationships between such basic categories as identity, personality, brand, image and reputation.

Another interesting question is how to build a bridge between identity and user/visitor experience in complex settings like urban communities.

We need to learn more about the effectiveness of branding. My assumption is that currently even professionals rely too much on vague assumptions and beliefs on how various branding efforts really benefit the community. In short, researchers and professionals within the discipline should be hungry for empirical evidence.

Changes in the context of branding are worth a closer look, including digitisation and the previously discussed mediatisation. As a part of this agenda, rankings are still worth deeper analyses.

Another issue is how citizens can be effectively included in branding processes and how to solve the problem of asymmetry between laymen and professionals in the process. We probably have to start with people’s view of brand identity, and continue from there in an open dialogical process to refine it and to make it clear and manageable. Possibly ‘consensus conferences’ would be an ideal form of such an involvement. Another option would be Web 2.0-style crowdsourcing.

We should also learn from experiences of citizen involvement in branding, like ‘People Make Glasgow’ (2013).

Rankings are plagued by quality problems and also potential biases relating to vested interests, which make them problematic in many ways.

Yet, in general, increase in transparency and wider understanding of cities’ relative positions according to given criteria and their weighing is a good thing.

This implies, however, a mission. We need some kind of professional and stakeholder education among actors who produce, disseminate, interpret and utilise such rankings in order to minimize manipulative use of such media content.

Rankings are particularly useful as intermediaries that often fairly objectively tell whether city branding in individual cases is on the right track or not.

Connect with Ari-Veikko Anttiroiko on LinkedIn or visit his profiles on ResearchGate, and Academia.edu.

Enjoyed our interview with Ari-Veikko Anttiroiko on the political economy of city branding? Spread the word!