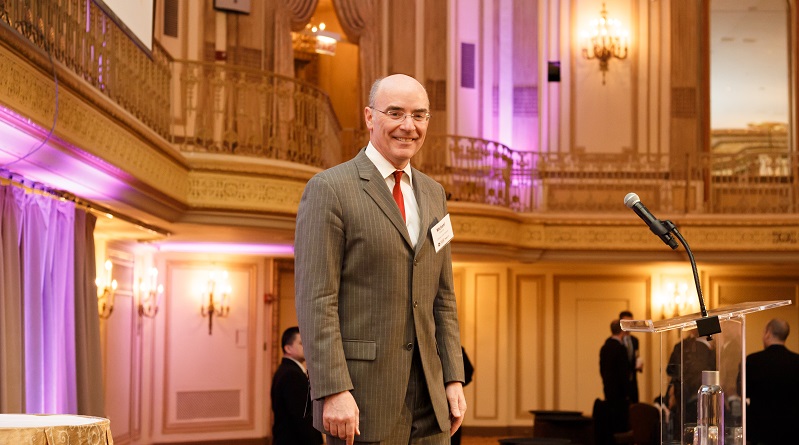 How to revitalize a downtown area and business district? Michael Edwards in this interview shares how the Chicago Loop Alliance is strengthening and promoting placemaking and economic development in downtown Chicago. Learn how a business improvement district organization works, its challenges – and what’s next for Chicago.

Michael, Chicago has benefited from a strong brand for many decades. To your mind, what does the city stand for today? How does it want to be perceived?

Chicago is well-known as “The City that Works” and “The Second City,” and I would say these taglines are still an important part of its brand today. What many people don’t know is that “Second City” doesn’t refer to Chicago being subordinate in any way; it refers to Chicago being rebuilt from the ground up after the Great Chicago Fire of 1871. Chicago today maintains that spirit of tenacity, innovation, and “no little plans,” as Daniel Burnham famously said.

What’s changing is the kind of work taking place, especially in the Loop and central area. Efforts by the city, organizations like World Business Chicago, tech incubators like 1871, and advocacy groups like Chicago Loop Alliance are bringing Chicago to the forefront of tech and innovation.

Chicago stands for thoughtful reinvention, being on the cutting edge, and working hard to move the city forward.

How has your own view of Chicago changed over the years – especially since you took up the position of President & CEO of the Chicago Loop Alliance, in November 2012?

Initially, I thought it was a really large city, and I was going to have trouble with scale. Come to find out, Chicago is really like a small town. Everybody knows everybody, and everybody is very positive and wants the city to be great. So everybody works together, and that was a surprise.

In a nutshell, what is the Chicago Loop Alliance all about?

Chicago Loop Alliance’s services and projects are in place to realize the vision of keeping the Loop a vibrant global business district and recognized world-class destination.

We achieve this in a few different ways:

We also do a lot of work with economic development, including releasing about one study per year on some aspect of the Loop. All of these efforts support our mission of creating, managing, and promoting the Loop as a high-performing urban center which is attractive to people and investment.

Cities – and especially downtown areas – are changing rapidly. Which aspects of handling a booming residential and office market do you find the most difficult, from a brand strategy point of view?

In 2019, we released The State of the Chicago Loop: 2018 Economic Profile, which has a ton of great data on a variety of sectors in the Loop—real estate, retail, the office market, transportation, higher education, the arts, hospitality and tourism, etc.

What we’re seeing from this report is a huge increase in residential development. While the City of Chicago has gained 1.4 percent in population since 2013, the Loop has seen a 28.9 percent increase.

To be honest, this boom in residential development has only served to improve the Loop’s brand. There was a time not so long ago when the Loop was seen as a place to go to work and then leave. It was fairly quiet after 6 p.m. and on weekends, aside from the theater and tourist crowd.

Now, based on pedestrian counters we have placed on State Street, about a quarter of all pedestrian activity takes place at night. That has everything to do with a growing residential population, and with that, all of the amenities that people expect — bars and restaurants that are open later, a myriad of retail offerings, world class public space, etc.

The Loop is lucky in that it is the most transit-rich neighborhood in Chicago, so we aren’t seeing strain because of these new residents. We’re only seeing the Loop flourish with their presence, and we’re thrilled to see how a continued climb in residential numbers can keep breathing new life into this area of Chicago.

The Loop’s office market is healthy, but we are coming to a point where the business district needs some reinvention. Given that Chicago is all about adapting and rebuilding—historically, quite literally—we are excited by the opportunities ahead of us. We envision the Loop at its healthiest with a balance of sectors.

The office market will always be important to the area’s success, but increasingly we’re seeing hospitality and tourism, retail, food and beverage, the arts, and residential playing a crucial role in the Loop’s success.

Reinvention is always a challenge, but it’s an exciting one. In the near future, Chicago Loop Alliance will lead an effort to create a State Street Master Plan that will envision what this historic retail corridor will be like, moving forward.

Bringing stakeholders together and engaging them is often referred to as among the biggest challenges in place branding practice. Do you agree?

Of course, any time a large, diverse group of people comes together to accomplish a common goal, it is challenging. Chicago Loop Alliance engages a variety of stakeholder groups: our board of directors, our Special Service Area Commissioners, politicians and city employees, and a couple of less “official” stakeholder groups for different streets in the Loop—not to mention more than 250 member businesses.

I think we’re lucky at CLA to have very engaged stakeholders; generally speaking, it is not difficult to get people to show up and contribute to the conversation. And any challenges with wrangling ideas and synthesizing them into action items are outweighed by how satisfying it is to know there are hundreds of people in this small area who are dedicated to working with us to make the Loop the best place it can be.

I’ve found that, as long as we’re able to explain our decision making and show that everything we do is done thoughtfully, for the most part people are willing to get on board.

Downtown management organizations often find themselves charged with the task of striking a balance between consumer-facing and business-focused branding. How do you approach this balancing act at Chicago Loop Alliance?

This is one of our big challenges for 2019. It is in our business plan for the year to begin the process of creating a consumer-facing Loop brand—something we have not done in the past. This is challenging not only because branding is always a huge undertaking, but because we need to show our stakeholders why it matters, and why it’s beneficial to us in the end to create these separate visual identities.

I think the best thing anyone can do in this situation is involve stakeholders early and often, while maintaining fair boundaries. This will require your stakeholders to trust you, which will be best achieved by showing them you’ve done your research and you’re working with branding experts.

Being able to explain every decision you’ve made in this process is paramount to getting everyone on the same page and making the project a success.

Which other cities and urban initiatives in the US or elsewhere have inspired you over the last years, in how they have succeeded with smart city branding and downtown management?

The city of Pittsburgh is doing a lot with autonomous vehicles, and when I was there, we did a lot of placemaking and public space enhancement. Market Square was the big project there. They’re doing a lot of cool stuff out on the West Coast that is giving people reasons to come back downtown besides just shopping.

Having been in charge of Pittsburgh and Spokane downtown management organizations prior to your involvement with Chicago, what are the similarities (or differences) between cities of different strength and size, when it comes to place branding?

The social register is open in some cities and not in others. In some cities, the leadership is very open to new ideas and new people, and in other cities, not so much. I think that’s the biggest difference. Chicago is complicated; it’s very big, it has a lot more layers than some of the other cities I’ve worked in. I have sometimes had difficulty securing significant time with elected officials. The mayor in Spokane, I could call up and go see at any time.

How is Chicago Loop Alliance financed? And which financing model would you consider the most suitable for the brand development and management of downtown organizations like yours?

We wouldn’t necessarily ask the SSA to fund membership events that benefit businesses outside the tax district, and we wouldn’t expect members to pay into projects that are dedicated only to State Street.

In terms of branding, we are still working out the funding for the long term, but this year we allocated some SSA funds to initial branding work. Because of this, we will think of ways to prioritize State Street in our branding efforts.

How do you measure the success of your place branding initiatives?

Because we are in the very early planning stages of creating a consumer-facing Loop brand, we have not yet measured our successes in this area. We do complete a survey every year to gauge general Chicago Loop Alliance brand awareness. This survey is administered by our Street Team members who are out on State Street seven days a week, interacting with businesses and pedestrians.

Which would you say is the biggest challenge that city marketers and brand managers are going to encounter in the next years?

The biggest challenge for marketers and managers will be something that we don’t even see coming yet. There are obviously a lot of ongoing challenges and changes to everything in urban environments, from the way we travel, to the way we consume information, products, and experiences.

I think keeping up with that new landscape will continue to evolve, but there will also be something completely altering to the culture that we can’t even anticipate. We just have to be ready to watch, listen, and adapt.

Five tips for business improvement district leaders and city downtown managers eager to ‘do it right’?

Enjoyed our interview with Michael Edwards on how the Chicago Loop Alliance is strengthening and promoting placemaking and economic development in downtown Chicago? Spread the word!