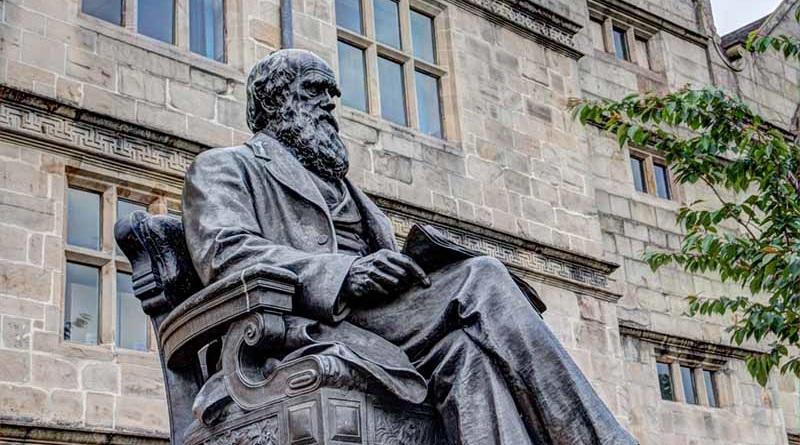 Shrewsbury and its recent brand positioning as birthplace of Charles Darwin is the topic of this guest post by Aleks Vladimirov, partnerships manager at the Shrewsbury Business Improvement District (BID). Learn how this town in the UK has rediscovered its celebrity citizen, Charles Darwin, and how it is using the connection to put its name on the map.

Shrewsbury: a place like no other or an “original one-off”

Shrewsbury is a town in the United Kingdom full of higgledy-piggledy streets with names like “Grope Lane”, “Wyle Cop”, “Mardol”, an a river that scoops up the town in a loop. Shrewsbury is home to unique places that are owned by artisans and craftsmen that have long gone in many urban areas, due to the globalisation and standardisation of high street brands. This is why the town has embraced an identity as Shrewsbury “The Original One-off” – focusing on the historic nature of the place, its welcoming local community and the indie personality of its high street tradesmen.

But there is a hidden fact, often missed from history – Shrewsbury is the birthplace of Charles Darwin, whose “[easyazon_link identifier=”0451529065″ locale=”US” tag=”tpbous-20″]On the Origin of Species Through Natural Selection[/easyazon_link]” has changed the world in so many ways.

It is hard to pin down exactly why this is such a hidden fact. Talking to locals, a visitor to the town would find that they would be quick to say that they do not want their town to be a bland destination where the sole reliance is on people coming in to take a few snaps with their cameras in front of Darwin’s statue. Shrewsbury has so much more to offer – possibly the best place to raise a family in the UK (especially, given the fact that you can have your children study in the school that educated Darwin..).

Darwin spent around 30 years in Shrewsbury. Most of this time he’d explore outdoors, partly due to the influence of his mother, who was a botanist and keen gardener. The unique topography of Shrewsbury fostered Darwin’s inquisitive mind. The ancient rocks across the town provided him with a view into the Earth’s formative years. The loop of the river Severn promoted opportunities for aquatic exploration, and the surrounding countryside housed bugs and creatures for Darwin to collect.

In his autobiography Darwin mentions the impact Shrewsbury had on him:

“I have heard my father and elder sisters say that I had, as a very young boy, a strong taste for long solitary walks; but what I thought about I know not. I often became quite absorbed, and once, whilst returning to school on the summit of the old fortifications round Shrewsbury, which had been converted into a public foot-path with no parapet on one side, I walked off and fell to the ground, but the height was only seven or eight feet. Nevertheless the number of thoughts which passed through my mind during this very short, but sudden and wholly unexpected fall, was astonishing, and seem hardly compatible with what physiologists have, I believe, proved about each thought requiring quite an appreciable amount of time.”

The Origin of Independent Thinking

Despite Darwin mentioning his hometown Shrewsbury around 30 times in his autobiography a sense of pride in him is somewhat missing in the town, with only a small part of the museum devoted to him. One may assume there is some religious reason behind this, since Darwin’s legacy is often seen as antagonistic of the church. However, this could also be the by-product of a long-standing tradition of the town being a feeder to bigger urban areas, resulting in somewhat of a brain-drain. This is why Darwin’s story being one of going away from Shrewsbury to change the world does not resonate.

However, in 2017 the time seems to be right to reclaim Darwin and his broader legacy. The way this has began is by understanding what truly resonates with the identity of the people of Shrewsbury – their unwavering sense of independence. It is this sense of independence that pushed Darwin to look for alternative explanations to dogma and still stay humble in his scientific quest for knowledge.

Traditionally, Darwin’s birthday is celebrated every year with the Darwin Festival, a week-long event that brings together history, science and nature. This has now been extended to engage with the town in a non-scientific way.

A partnership in the town launched the arts project Evolution Explored which, over the years, is set to evolve into a full-blown DarwIN Shrewsbury Festival in order to to celebrate Shrewsbury as “The Origin of Independent Thinking” through the lens of arts and culture.

The festival also aims to establish Darwin as a landmark, based on the principles shared in The Place Brand Observer’s guide on the meaning and importance of economic development, which gives a simple normative guide to economic development: “When we look at most places we have them at the top of mind because they either have an incredible landmark or economic vitality.”

The DarwIN Shrewsbury Festival will look to inspire with co-creation activities in order to generate pride and ambassadorship in local residents, much like what best practice and academic research ([easyazon_link identifier=”B00S1603I4″ locale=”US” tag=”tpbous-20″]Kavaratzis, Warnaby & Ashworth, 2015[/easyazon_link], see Service Dominant Logic chapter) often tells us is missing in a lot of top-down branding exercises.

Aleks Vladimirov is the Partnerships Manager at the Shrewsbury Business Improvement District and a doctoral student at the Institute for Place Management at Manchester University in the UK. Connect with him on LinkedIn.

Enjoyed this guest post on how the town of Shrewsbury in England is using its credentials as birth place of Charles Darwin to strengthen its appeal as place to visit, live and work? Share and spread the word!