Business Improvement Districts Explained: What BIDs Mean And Why They Matter 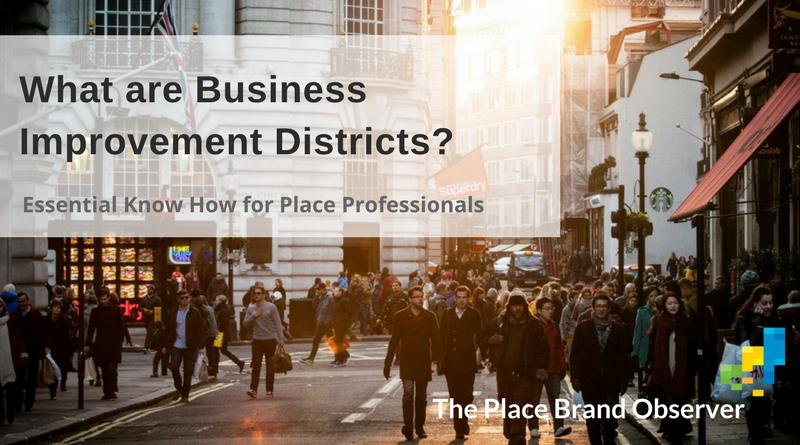 Business Improvement Districts (BIDs) in the UK are the topic of this post, in which we share the views of experts in the field. We learn how BIDs have evolved from dealing with menial place management tasks, like street cleaning, to engaging citizens in strategic place branding. We also take a glimpse into a future where the role of BIDs seems to be increasingly revolving around local placemaking, in response to macro trends.

The following experts contributed to this post on the meaning of BIDs:

What are BIDs? Origins and Meaning

Business Improvement Districts (BIDs) were first established in Canada and the US in the 1960s. They now exist across the globe, including in South Africa, Germany, Japan, New Zealand and Australia. Their origin is in the trend of sub-urbanisation in the US, whereby town centres were out-competed as commercial centres and were increasingly in need of investment to reverse the trends.

BIDs have been operating across the United Kingdom for over a decade. At present there exist over 250 BIDs across the country. The majority of BIDs are in town centres. However they are also in industrial, commercial and mixed-use locations.

A BID can only be formed following  a ballot, in which businesses vote on a “BID Proposal” or “Business Plan” for the area. The Business Plans are put together on the basis of a ballot of the area’s businesses, and outline the key strategic priorities to be tackled by the BID. Once a BID is set up, businesses in the district contribute to a shared budget through a levy for 5 years, before a reballot is needed.

A key aspect of the operations of a BID is its partnership with other entities operating in the area, especially the local authority, such as city councils. Often there is a clear agreement of how the BID would add services and projects over and above what the local authority already does.

Kirsten Henly, Chief Executive of Kingston First, describes the role of BIDs to her friends outside work as follows:

In a nutshell, I explain that I work for an organisation that manages, promotes and develops the town centre under a business plan, which has been agreed on and voted for by businesses and organisations in the area. We deliver the projects and services that will enhance the area for the benefit of their customers, residents and visitors.

Current Situation of BIDs in the UK: Trends and Challenges

The political and economic landscape in which BIDs operate is changing at a fast speed, which brings challenges as well as opportunities. BIDs have now reached a level of maturity which enables them to take a more strategic economic development approach, whilst delivering a bespoke place management vision.

Simon Quin, Director at the Institute of Place Management:

The environment in which BIDs operate in the UK is changing. Almost 90% are town centre based. Town centres are seeing a rapidly altering retail offer, reductions in local authority spending. There is uncertainty over rating revaluations and the implications of the devolution agenda. BIDs themselves have evolved and are delivering different services in different ways, plus there are now many more of them.

Kirsten stresses the importance to remember that on top of the increasing strategic challenges, BIDs ought to remember where they came from and who elected them:

The on-going important challenge centres on BIDs being member and business orientated, commercial and accountable in their focus, and delivering relevant projects in a way their local members want. As BIDs take on more responsibilities and play an increasing role in their area, the risk of their impact dissolving increases. As more BIDs mature, and expectations on deliverability increase, BIDs will need to continue to remind themselves of the core tenants and principles of their existence, and why members created them. And, critically, that they operate in a transparent and accountable way.

Future Challenges of BIDs in the UK

Taking into account the current levels of national and international uncertainty, there is an increasing need for local communities to step to the fore and give a sense of meaning, good management and direction.

For Gianluca, BIDs are best placed to provide localised solutions for macro problems, including:

For BIDs to take on this increasingly strategic role within their place and community, they need to work in ever more complex systems of partners. Upskilling BID practitioners is therefore of paramount importance, points out Simon, whose Institute of Place Management is preparing to do just that.

It is complexity that encouraged leading BIDs to look at how they go forward; how can they engage more in emerging policy, what can they learn from evidence and research, how do they develop innovative approaches to delivery, and how can they maximise engagement with the businesses that bring about their existence to make the most of the place in which they are located? These are big challenges and we look forward to working with them to address them.

As the last point of this expert panel on BIDs, Kirsten suggests to address term length of BIDs, in order to facilitate their new and evolving role

The central debate for the immediate future of BIDs is term length. Given that some BIDs (like Kingston First) are approaching renewals for a fourth term, perhaps now is the time to consider term extensions. There would need to be some clear requirements for this (such as number of renewals successfully undertaken and thresholds of voting intentions) but it would allow BIDs to think longer term, and contribute more comprehensively to strategic, structural and broader business and place agendas.

Overall, it seems a future of increased complexity and uncertainty globally and locally is putting pressure on Business Improvement Districts to prove their worth as part of the solution particularly in the UK, as Brexit implications and decentralisation pick up speed.

At the same time, BIDs are well positioned to serve as linkage between place making and place brand management at a city level, which presents a massive opportunity and would be a promising way forward.

The expert views presented in this post were curated by our editorial contributor Aleks Vladimirov, who is currently the Partnership Development Manager at Shrewsbury Business District in the UK.

Enjoyed this post on Business Improvement Districts (BIDs) in the UK, the challenges, opportunities and why they matter? Share and spread the word!