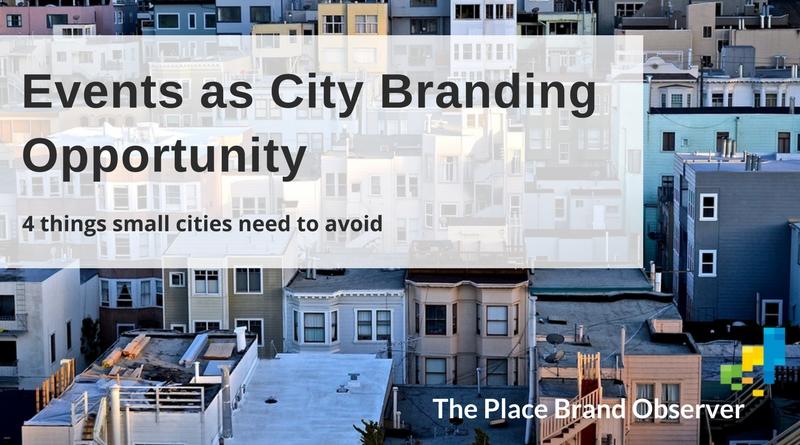 Events have become a popular means for smaller cities to boost their image and gain exposure. A practice not without its challenges, as illustrated in this guest post by Christian Dragin-Jensen, Head of the Department of Service, Hospitality & Tourism Management at Erhvervsakademi SydVest (Business Academy SouthWest) in Denmark.

An emerging trend is for smaller cities to use larger, international events as bellwethers for their city branding efforts. There are challenges, however, which these cities must address in order to avoid significant caveats and not end up in city branding limbo.

1. Tackling the issue of “fit”

The prospect of hosting an internationally recognized event is tantalizing for smaller cities due to their ability to harness positive associations, generate significant media coverage, and potentially attract tourists as well as new residents. It’s easy to be blindsided by the bright lights of any large event, but just because you can host a large event, that doesn’t mean you should. Too often have I seen smaller cities eagerly grab at large events without asking first if it fits with the city:

Smaller cities tend to place great emphasis on population growth (attracting new, talented residents), so events that will only bring tourists who don’t fit the target demographic profile will potentially only serve as a temporary cash influx and not a long-term strategic branding initiative. This seems a pertinent discussion point when elected officials vocalize their justifications for hosting an event.

Research has shown that there are image links between an event and a city, and that if there is a strategic fit, they can be used to maximize image benefits (Florek & Insch, 2011)¹. However, that does not mean that certain positive associations from an event are the right ones for a city’s branding strategy. This is particularly important for smaller cities who have just launched a city branding concept, either to strengthen current associations or to rebrand themselves to dispel negative associations. It is of little importance how popular or content generating an event is if the associations do not carry a strategic fit with the city.

Does the event fit the local residents, so they can become brand ambassadors?

Any city branding initiative cannot hope to survive without the support of locals – they are, and will be the foremost brand ambassadors for the city. In other words, the city brand must provide believable associations in order to be authentic.

The same applies to an event. When its associations are in tune with those of a city, the event will create a symbiotic understanding, leading to a more concise and stronger brand. This does not mean that in order to be authentic, a city cannot reinvent itself and can only “stick to its guns”. Scholars have argued that authenticity is not absolute, but negotiable, and that over time, can change – patience is key!

Consider using recurring events (as opposed to one-off events) as a starting point for branding efforts, in order to get the locals on-board.

For example, Næstved, a small city in Denmark, played host to the World Championships in Women’s handball (and built a costly new stadium in the process), without having a professional team in the city, nor having aligned their events since to brand themselves – no wonder that many locals weren’t supportive of the initiative.

Don’t throw all your eggs in one basket! Due to budget constraints and the urge to host a big event, smaller cities tend to overspend on one flagship event, whilst forgetting to observe the event portfolio in its entirety.

A popular word thrown around with events is “legacy”, but a single event only has a passing effect on a city brand. A strong and strategic event portfolio will leverage far more benefits for a city’s brand as opposed to going all-out on 1-2 events.

Research has also shown that building the city’s personality by associating it with multiple events results in a city being far more likely to be seen as an attractive place to not only visit, but to live and work as well (Westerbeek & Linley, 2012).²

This also helps to combat the dreaded rate-of-decay issue which cities face when using events for their branding strategy: a decreasing effect on the city awareness and image over time. Even large cities who have hosted mega events, such as the Olympic Games or FIFA World Cups, have fallen prey to rate-of-decay, as they did not succeed in creating a continuous synergy across the portfolio (and time).

An example of good practice is the Danish city of Horsens. Once known for its rough neighborhoods and large prison, Horsens has successfully rebranded itself as a hip, urban city for young professionals by systematically, and thematically building their event portfolio around rock music and concerts.

Knowledge is power. Events are a (costly) temporal phenomenon, and the more we know about their impact, the better. A disturbing amount of small cities tend to carry out oversimplified analyses after an event has taken place – such as a simple satisfaction survey, or basic event visitor spending. Worse, some cities rely on opinions of local city officials who attended the event!

The host city’s image and branding initiatives seem to dissipate in these analyses. Arguments can be lack of resources and manpower, but there are strategies for resolving this. Collaborating with the event organizers, regional and national tourism agencies, as well as universities are all sound partners in carrying out pre- and post-analyses regarding the event’s impact on the city brand.

For instance, Esbjerg, another small city in Denmark, has reaped the benefits of better understanding how to evaluate events (from a city branding perspective) by working jointly with a local university by means of co-financing PhD candidates.

City officials should get used to always collect branding data from every event: data which can enable a city to better align its branding initiatives with events, and not to merely supply political justifications for elected officials.

4. Understanding that events are not “cure-alls”

Events are a valuable strategic tool, but there is a penchant for claiming a large event as a panacea for the variety of issues a city faces, earmarking it to improve the city’s image, aid in urban gentrification, provide civic pride and deliver financial incentives by means of tourism.

While events can certainly serve as catalysts for rectifying these issues, they work best in tandem with other city branding & attractiveness initiatives. In other words, events can be flagships for a city, but there must be an underlying foundation of the values they wish to shine through to the city’s target market.

Herning, a small city in Denmark, has heavily invested in events from both a culture and sporting perspective, yet has managed to leverage these events to successfully portray Herning as a business capital, where a unique entrepreneurial and innovative spirit exists.

Enjoyed this guest post by Christian Dragin-Jensen on how events can support the city branding of small cities, and how to avoid four common pitfalls? Share and spread the word!