Current State of Peacefulness Around the World: Key Insights from Global Peace Index 2020 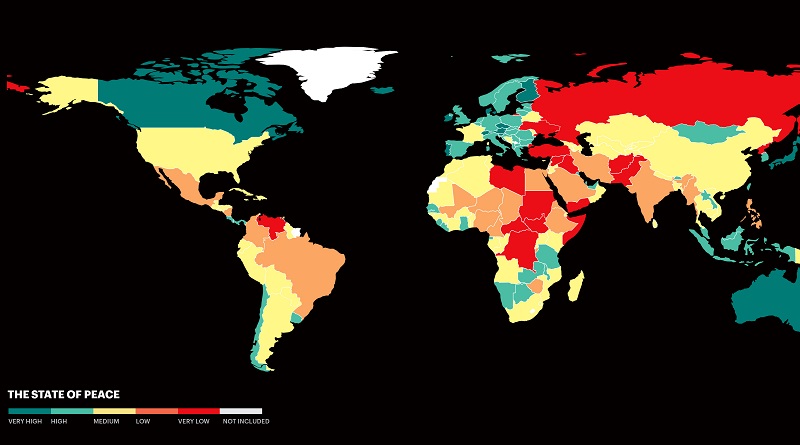 How peaceful is our world? How has the coronavirus situation impacted global peace? Which countries are handling it well – which likely to struggle? Thomas Morgan, Senior Research Fellow at the Institute for Economics & Peace, addresses those and other questions, sharing latest insights from the Global Peace Index 2020.

Thomas, which findings of the Global Peace Index 2020 did you find the most intriguing?

The Global Peace Index (GPI) is now in its 14th year – and shows that global peacefulness has fallen and is set to worsen as the economic impact of COVID-19 takes a hold.

Civil unrest has doubled since 2011, with 96 countries recording a violent demonstration in 2019, as citizens protested a range of issues, from economic hardship and police brutality to political instability.

This reflects a longer-term trend, with riots around the world increasing by 282% in the last decade, while general strikes increased 821%. Europe has experienced the most protests, riots and strikes – however only 35% of the approximate 1,600 total were recorded as violent; the lowest percent in the world.

Although peacefulness has deteriorated in the last decade, de-militarisation is improving overall, and 100 countries have decreased their military expenditure since 2008.

The economic impact of violence in 2019 improved due to a lessening of the intensity of internal conflict; however, violence cost the global economy $14.5 trillion or 10.6% of global GDP.

Deaths from terrorism have fallen for the fourth consecutive year, down by 75%.

The COVID-19 pandemic is expected to have a significant impact on global peace. It will negatively affect political stability, international relations, conflict, civil rights and violence – undoing many years of socio-economic development.

As economic volatility increases, nations are expected to divide into those that stabilise or deteriorate in peace and prosperity – those dependent on aid or with high debts are particularly likely to suffer.

Italy, Greece, Latvia and Poland are among the countries least likely to weather COVID-19 well – this is due to economic challenges and poor performance on ‘social resilience’, while Norway, Australia and New Zealand are best placed to handle the future.

Economic downturn is likely to lead to decreased support for UN peacekeeping operations, making peacebuilding more difficult, although it could also prompt a fall in proxy wars.

Which countries and regions have seen the strongest increase in the ranking since last year?

Iceland remains the most peaceful country in the world, a position that it has held since 2008. It is joined at the top of the index by New Zealand, Austria, Portugal, and Denmark.

Europe continues to be the most peaceful region in the world. Greece and Belgium had the biggest improvement in peacefulness.

Greece because of a better score on the political terror scale; Belgium because of fewer deaths from internal conflict, and both improved their homicide rates.

The greatest improvement in peacefulness occurred in the Russia and Eurasia region, which saw progress in the IEP’s research domains of Ongoing Conflict and Safety and Security – with Armenia recording the largest improvement of any country, rising 15 places to rank 99th.

Which countries and regions have seen the strongest decline?

Afghanistan remains as the least peaceful country, a position it has held for two years, followed by Syria, Iraq and South Sudan.

South America recorded the largest deterioration in peacefulness due to issues in Militarisation and Safety and Security. However, the Middle East and North Africa remains the least peaceful region. Benin experienced the biggest deterioration of any country in the world, falling 34 places.

What is the methodology behind the Global Peace Index?

Produced by the international think-tank the Institute for Economics & Peace (IEP), the GPI report presents the most comprehensive data-driven analysis to date on peace, its economic value, trends, and how to develop peaceful societies. The report covers 99.7% of the world’s population and uses 23 qualitative and quantitative indicators from highly respected sources to compile the index.

These indicators are grouped into three key domains: Ongoing Conflict, Safety and Security, and Militarisation.

For details on the methodology and results of the most recent study, visit visionofhumanity.org.

Curious about how different countries compare in terms of their sustainability, attractiveness, brand strength and reputation? Find out in our country observatory.