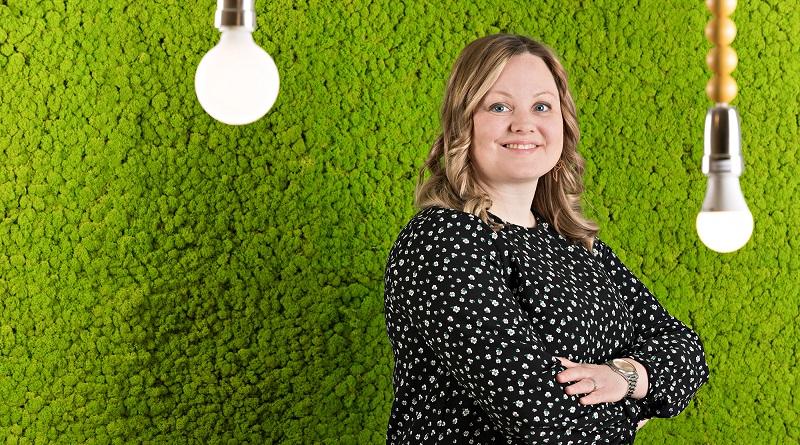 Our interview with Mia is part of a special series with speakers at the Nordic Place Branding Conference, organized by our friends at Future Place Leadership.

Mia, “jumping into the unknown” is a situation you must be dealing with every day, as innovation manager. What inspired you to dedicate your career to innovation and community development?

Jumping into the unknown has definitely been the theme of my career. Originally the thought of having a career in the cross section of entrepreneurship and innovation never crossed my mind. Quite the contrary! After high school I had no idea what I should study next, but one thing was for sure. I never wanted to do anything related to business, because in my mind it was solely related to adjectives such as greed and selfishness with the sole intention of benefiting from others to make more money for oneself.

My vision was blurred by the negative stereotypes and assumptions. However, later on in my career I was forced to confront my assumptions as I accidentally found myself working in a startup hub with a task to create an entrepreneurship community. Very soon I discovered that the assumptions I had were far from the truth. The majority of entrepreneurs I came to know had dedicated their lives into making the world a better place – one innovation and service at a time.

Not only has my career choice been 50% coincidental, but I would also say it has been 50% a conscious choice. The economic crisis followed by the sudden collapse of Nokia mobile phone business had a significant impact on the course of my career.

My husband was working for Nokia mobile phones and our family had gone through the layoffs at least ten times. Eventually the entire site in Oulu, where my husband was working, was shut down and my husband was offered a position in Helsinki. As a family with two little children we valued the coziness of the small city, its tranquil lifestyle and closeness of the nature, as well as sense of security.

The move did not feel right for our family and we ended up turning down the offer. Right then and there I thought there must be something I could do on my behalf to help assure there would be opportunities for people to make a good living in the north as well.

Imagination and innovation are key factors for successful place branding strategies. Which other features would you consider essential?

Staying authentic and true to oneself are definitely key factors, as well as having the courage to use so-called weaknesses as one’s strengths. It is also crucial to learn to challenge assumptions and traditional ways of doing things.

How much of the ways we are thinking and doing things are actually based on assumptions rather than facts? When we learn to challenge our assumptions, we’ll be likely to discover new perspectives and alternative approaches. It is also essential to involve the entire community and listen to the insights the grassroots have to offer.

It is very likely that the grassroots are able to offer authentic, innovative, and unique perspectives and ideas, but they are often lacking the resources to make those ideas happen. Likewise, a sense of humor and the ability to laugh at oneself will be beneficial as well.

Pärtel-Peeter Pere once referred to your start-up, Polar Bear Pitching, as a good example of place branding. To your mind, what makes it so successful?

Polar Bear Pitching is deeply rooted in the history of the Oulu region. For centuries the city has been a central place for commerce in the North and water has always been an element associated with international business.

Likewise, for decades Oulu has been the birth place of several technological innovations which have been used widely across the world. Polar Bear Pitching is also heavily rooted in the Northern, arctic nature and its dark and cold winters, as well as Finnish socio-cultural traits, sauna and ice hole swimming.

Polar Bear Pitching utilizes the attributes of its location, Oulu, in a unique way, but it also symbolizes the Finnish can-do attitude of sisu.

Sisu, an extraordinary determination and bravery in the face of extreme adversity, is a mindset that surpasses the hardships and turns challenges into opportunities. It enables us to see beyond present limitations and helps us grow as we learn from our experiences. Sisu helps individuals overcome their barriers of growth.

Many of the participating entrepreneurs have said that Polar Bear Pitching has given them the assurance that they have what it takes to make it, even in challenging circumstances.

Polar Bear Pitching serves as a way to break through the limitations of mind. Many of our former contestants have said that after the experience they know they can do anything and they feel that no matter how difficult the circumstances will be, they have what it takes to handle it.

I guess one of the reasons why our event has become successful is its quirkiness, which makes it stand out from the rest of business events. Quite often business events tend to repeat the same pattern, but we have challenged ordinary ways of doing things and we have brought a great deal of humor and playfulness into the game.

People quite often tend to think that in the adult world one needs to be serious to be taken seriously, but we want to challenge that assumption. Playfulness, creative collaboration, and a great deal of community spirit can take you far.

Not all cities are beautiful, unique, desirable. Do you have examples of how place branding strategies have helped not-so-great cities to use their weaknesses as strengths, in their positioning for attracting businesses, talent or visitors?

Oulu’s neighboring city Kemi has succeeded in attracting a large number of visitors by turning snow and coldness into its assets. Each year a large snow castle and an ice breaker cruise attract international visitors to the city.

How did you manage to get community support for Polar Bear Pitching? And what has been your experience working with different stakeholders?

Polar Bear Pitching is a huge community effort from many stakeholders of the city and international stakeholders, such as our sister cities worldwide (Tromsø, Leverkusen, Hangzhou, Sendai). Ever since its beginning the event has been created in collaboration with several stakeholders (the city, universities, students, university staff, entrepreneurs and other activists of the region). And it has included a great amount of volunteer work.

We have created the event in the spirit of Finnish “talkoot”, which is a term for volunteer work, where an entire community comes together to offer their time and talent for the common good or to help out someone in need. Talkoot was very heavily used in Finland after the second world war, when the entire society had to be rebuild.

In our case, people came together to help Oulu get back on its feet after the collapse of Nokia mobile phones business and to help Oulu stand out in the global competition. It has become a showcase to the rest of the world that an end of something is often just a new beginning.

One of the key elements has been the fact that right from the beginning we have been communicating about our plans very openly to everyone. We have not thought that we would be able to do things on our own, but rather we have known that in order to succeed we will need to involve the entire ecosystem.

It has been crucial that we have been constantly communicating about or plans and we’ve also given our stakeholders enough room for collaboration, while listening to their views as well. Basically, we have kept the process rather open, and we have tried to keep the hierarchy very low, giving our stakeholders a sense of ownership.

What do you think are the most common mistakes committed by city branding professionals?

I think it has got to do with assuming too much. Assuming that we know what people are looking for and what makes a great city brand.

Another mistake is trying to mimic what other places are doing and trying hard to fit in and hide the “ugly truths”, things that make a place truly unique.

Instead of trying to blend in, places should boldly embrace their so-called weaknesses as things that make them different, interesting, and unique.

How important is authenticity in place branding?

I think it is the key building block for any successful place branding efforts.

As a speaker at the upcoming Nordic Place Branding conference in Stockholm this April, which aspects of your work will you share with the audience?

I believe that there are many elements in the Polar Bear Pitching story that could inspire the audience. Everything started out with the big crisis – the complete freeze of Nokia’s Mobile phone business. Our economy was greatly depended on Nokia’s success. Thus, the collapse of Nokia was a major economical draw back – a literal cold shower that hit our area very severely. Many regions around the world are facing unexpected challenges. The story of Polar Bear Pitching can inspire the listener to see challenges as new beginnings as Polar Bear Pitching is a practical example of the Finnish can-do attitude of Sisu – perseverance and guts which steps in when encountering difficult and extreme circumstances.

Polar Bear Pitching serves also as a way to demonstrate how places can bravely utilize underutilized assets and things that we often try to hide as our advantage. It can inspire the audience to think about what makes their location positively unique. Instead of hiding the attributes that makes us different, we can do something truly spectacular with it that makes your area stand out. Being true to one self and boldly embracing one’s positive uniqueness, can lead to great things.

Polar Bear Pitching is also a story of a “community induced snowball effect”. Creative collaboration, playfulness and community spirit have definitely been the driving forces behind our world-known event, and I believe this a recipe many other locations could find useful and it could inspire them to think differently.

Enjoyed our interview with Mia Kemppaala, organizer of the annual Polar Pitching event in Finland? Spread the word!