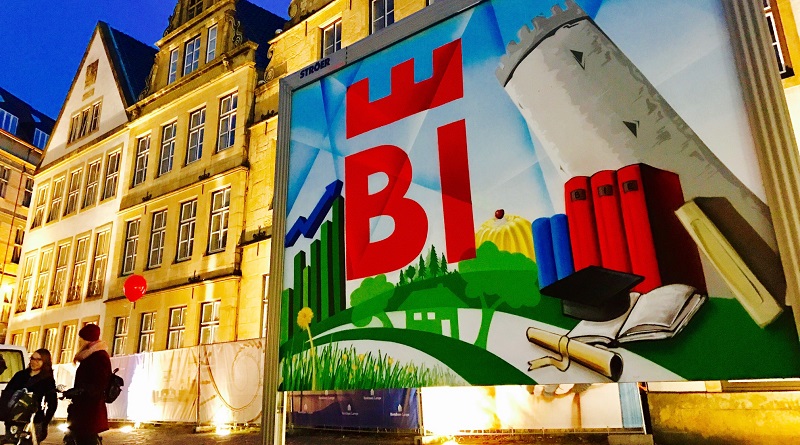 Full of history and culture, Bielefeld, a city located in the North West of Germany, has definitely stepped up its marketing game over the last couple of years. In order to gain a better understanding of the participatory approach that has recently been implemented to rebrand the city, we spoke with Martin Knabenreich, Managing Director of Bielefeld Marketing.

Before getting into too much detail, our attention was immediately caught by the official logo – one of the main visual elements of the new campaign. Submitted by deteringdesign as entry for the 2016 edition of the Bielefeld Marketing competition, the logo has two elements: “BI” that stands for the code of local license plates, and a rotated “E” – something that resembles the silhouette of Bielefeld’s most prominent landmark – the Sparrenburg, a medieval castle.

“There is much more behind these three simple letters” – Mr Knabenreich reveals to us – “The city of Bielefeld lacked a distinctive corporate design. Our goal was to find an easily recognizable symbol that would help us to visually unify our message. This artwork kind of represents our way of thinking at Bielefeld Marketing. We aim for a clear-cut approach based on three core pillars: life quality (urbanity meets nature), strong economy (excellent business location) and city of science and education.”

Beyond doubt though, the most interesting part about the overall strategy is its very diverse participatory approach. Not only the logo itself can be freely used in private contexts as well as public settings, but contests such as the “Deine Fan-Aktion für Bielefeld” – where virtually anybody could submit ideas –  have really made it possible for individuals to get involved.

“You see, we wanted to build on the fondness and pride Bielefeld citizens have for the town.” It was not just about creating a ‘city brand’, but  more like a ‘civic brand’ – Mr Knabenreich tells us.

“Among the different initiatives, the ‘brand cafes’ was one of those with greatest general interest from the start. We invited citizens and stakeholders, such as municipal agencies, universities and local businesses to meet up. The goal? Well, encourage all different participants to develop their own initiatives, and offer them support, if needed.”

Keeping an eye on financial resources and staff with such an open approach can, however, be a challenge. Despite those difficulties, 15 months into the campaign, things are still looking good. The new Bielefeld logo and CD won the “German Brand Award 2017” and brand awareness is gradually increasing across the country. The three winners from the “Fan-Aktion” competition have now received funding, and projects are expected to be completed over summer.

Interestingly, each one of the winning projects (a Street Art Festival, an event-series of sport/yoga “flash mobs” and an International BMX competition at the Sparrenburg) exemplifies, in a way, certain aspects of Bielefeld’s brand essence. They symbolise values of a “brand new” Bielefeld; a young vibrant city that combines urbanity and nature.

Plans for the rest of the year also look very promising. Besides addressing regional target audiences (e.g. day visitors) and their potential, Bielefeld Marketing will give further attention to sponsorships and partnerships with local businesses and companies.

“Everybody told us: Brand management is no sprint but a marathon.” – Mr Knabenreich concludes – “Of course, they were right. You have to be persistent and patient. Strengthening civic engagement and public support definitely remains one of our main objectives for the year.”

More about the city brand(ing) of Bielefeld here (German).