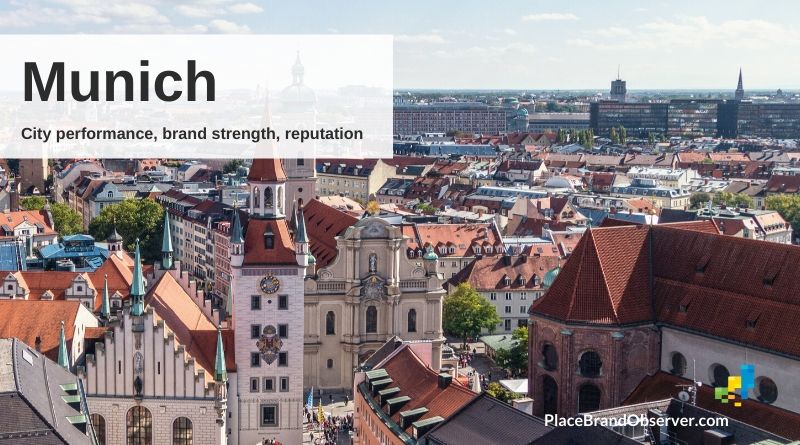 Munich, at the center of Bavarian heritage, strives to compete in a global market and to diversify its tourism-influenced brand through tech, talent and innovation.

But how does Munich position itself as a sustainable, dynamic and green European city while factors such as geographic location and people characteristics (not to mention the world-famous Oktoberfest) have been playing a key part of how Munich is perceived around the world?

The IPSOS Top Cities Report (2017) ranks Munich 23rd alongside Copenhagen, Osaka, Shanghai and Helsinki. While Munich does not rank among the top cities, it is fairly balanced in terms of live, work and visit.

The Global Financial Centres Index 27 considers Munich to be one of the most established international cities, with good performance considering that the city’s current ranking (37th) is an improvement of 15 positions since the publication of the GFCI 26.

Munich: how innovative, how dynamic?

Strengths displayed by Munich over recent years, according to the Dynamic Cities study, are positive population growth forecasts, patent density relative to population, as well as tech- and business-related grassroots participation.

Livability: how attractive is Munich as place to live?

The Nomad List ranks Munich relatively high (4.08/5.00) with the lowest scoring factors being startup score, cost, free WIFI in the city and traffic safety. On the other hand, Munich scores highly in social aspects such as nightlife, friendly to foreigners, female friendly and LGBTQ+ friendly.

How well does Munich perform in urban sustainability?

In celebration of the 50th anniversary of Earth Day, Resonance released a report on The World’s Greenest Cities, which highlights best practices for urban design for a post-COVID-19 world. Just behind Vienna as number one,  the consultancy sees Munich 2nd and Berlin 3rd. Commended for initiatives in infrastructure investment, Munich’s development encourages public transit, reducing car ownership and further improving quality.

Enjoyed our summary of global rankings and indices on Munich’s city performance, its sustainability, attractiveness for investors, talent and residents, its brand strength and reputation? Thanks for sharing!