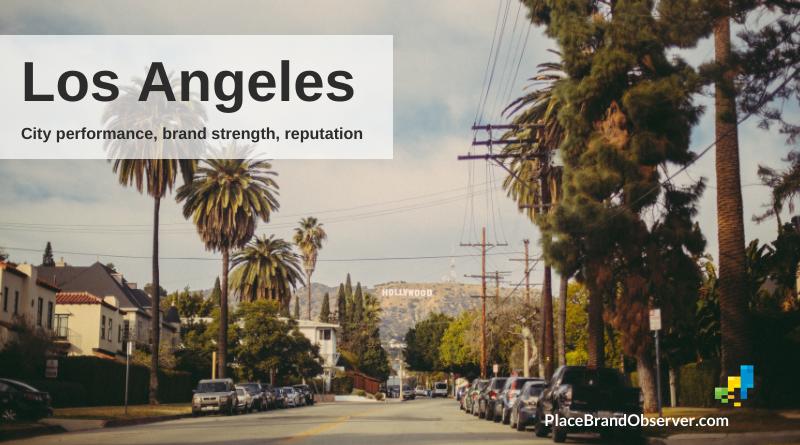 Los Angeles is famous for its entertainment industry and Mediterranean climate, but it is much more than just that. As one of the largest North American cities, it is home a leading port, among the busiest in the United States. But how attractive is Los Angeles for investors, talent, visitors and digital nomads? How strong is its brand strength and reputation?

Hollywood is symbolic of Los Angeles’ position in international entertainment and is an important contributor to the city’s economy.

In addition, Los Angeles is home to one of the busiest American ports, ranked 17th worldwide by Lloyd’s Top 100 Ports Report (2019) – 1st in North America.

Its human capital (people) is one of the greatest assets of Los Angeles (The Global Financial Centres Index 26). This is also testified by ATKearney’s 2019 Global Cities Report. The report assessed the city’s performance internationally and finds it leading in the area of human capital. Among other indicators, it looks at the availability of top universities and the foreign-born population. LA’s 13th position overall is strong, having moved four places from the 17th spot since 2018.

Similarly, Los Angeles is ranked 4th in the research and development section in the Global Power Cities Index. Perhaps unsurprisingly, the city is especially ranked highly by researchers (that is, researchers find it particularly attractive as place to work).

However, the city is only ranked 38th by Reputation Insitute’s 2018 City RepTrak study, a slight decline compared to 2017.

The Green Cities Index ranks Los Angeles the 6th “greenest” American city, praising especially its waste management (62 %).  In contrast, Los Angeles is only ranked 60th in the Planet category of the Sustainable Cities Index. This study finds the lack of green space one of the main shortcomings, in terms of LA’s urban sustainability.

Unfortunately, Los Angeles faces massive traffic congestion every day – among the worst worldwide. That said, it performs above average in the area of infrastructural safety (Safe Cities Index).

All in all, there is still plenty of work to be done for Los Angeles to become more sustainable and environmentally friendly.

How attractive is Los Angeles for digital nomads?

When deciding to move to Los Angeles, a digital nomad should take into account several factors. The Mediterranean climate appeals to many, as testified by LA’s 4th position among cities in the USA in the Digital Nomad Index.

If you enjoy a good run or like to relax in parks, then this might not be your city though, judging by the unimpressive 49th position (out of 56 ranked cities) in the respective category of the same index.

As always, money matters and LA is very expensive in comparison to other cities. For example, the Digital Nomad Index finds LA at 44th position for the cost of a beer and a 52nd position when it comes to finding a one-bedroom apartment – which is also stressed by the Nomad List. This list emphasizes the LA’s expensiveness several times, however also emphasizing the ease of doing cashless payments.

These are only a few important factors to take into account when deciding to move to Los Angeles.

Enjoyed our summary of global rankings and indices on Los Angeles’ economic performance, its sustainability, attractiveness for digital nomads, brand strength and reputation? Thanks for sharing!